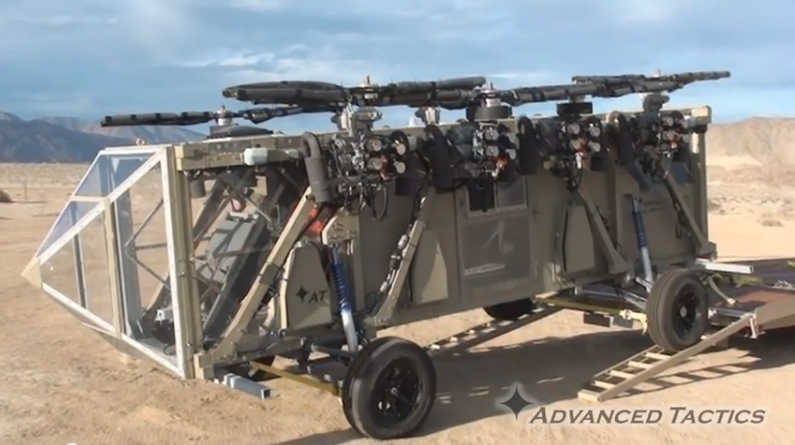 Call it a transformer, call it a flying cargo van, call it whatever you want but the Black Knight Transformer built by Advanced Tactics is one of the neatest things we have seen in action for some time. Capable of driving at 70mph, supported by a long travel independent style suspension, the vehicle can be driven by a person or controlled remotely. As we have read, the interior size and capacity is roughly the same as a Blackhawk helicopter which means that several people or smaller cargo loads could be hauled in the Black Knight. Obviously the fact that it can fly as well as cruise the highways and dirt roads is the big story and this video shows it taking off and making a short flight, hovering above the ground. The small, multiple engines and rotors look pretty cool both at rest and while fired up and elevating the craft off the ground.

The “Transformer” name is certainly catchy and it makes everyone who is below the age of 40 immediately start thinking of Optimus Prime and his crew fighting the bad guys. While there is no chance that the Black Knight will suddenly turn into a large, weaponized robot, this may be the first baby step toward a class of military vehicles that are capable of filling multiple different roles both in times of war and piece.

Unfortunately we don’t have any of the specifics regarding what the means of propulsion is when the Black Knight is driving and the engines for the helicopter portion of the program seem to be pretty well exposed along the sides of the truck-copter. Those engines seem to be boxer style four cylinders with multiple carbs or some type of individual runner fuel injection setup. There’s a muffler on each engine and maybe our eyes are lying but don’t those look like horizontally opposed four bangers to you?

We love stuff like this and we love that this type of innovation is going on out there in the USA. We often lament how the only thing this country seems capable of producing at times is bad reality television shows, but things like this remind us that there’s LOTS of brain power out there and when applied properly, it can turn out machines and ideas for regular guys like us to revel in.

Project Violent Valiant Update: The Firewall Gets Fabricated, The Dash Shapes Up, And Some Steering Shaft Surgery 25 years ago today, a guy with a Cessna and an AK-47 held the city of Boston hostage