Calculated Risk Or The Luckiest Trucker In America? Watch This Rig Plow Through Water Up To Its Windshield! 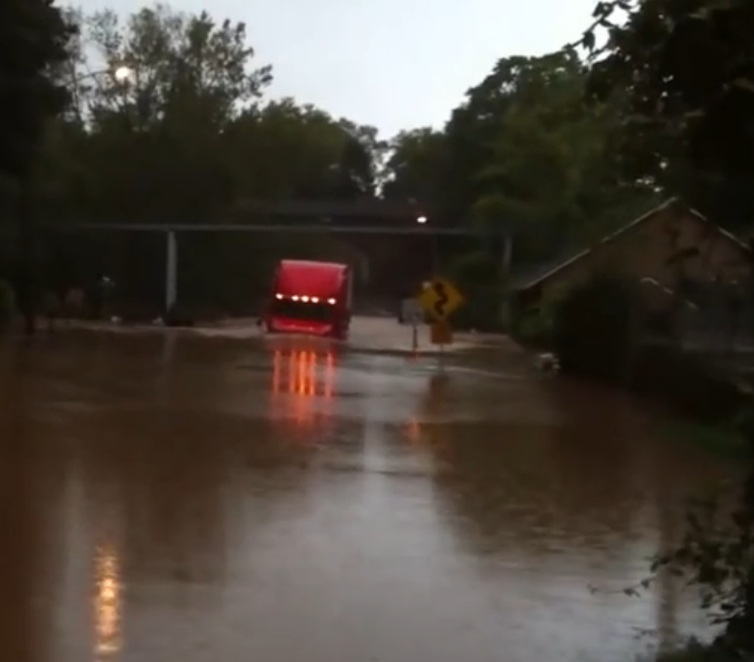 I’ll admit it. Back when I made my living as a CDL driver, I was kind of a wuss. There were guys who had no trouble bombing down icy hills or through unplowed roads with their trucks. Guys that would just blast that thing through holes and puddles you couldn’t see the bottom of and they never gave it a second thought. I never did it because I think I was thinking too much about the negative possibilities where those guys were just kind of ignorant to the whole thing so they didn’t care. In watching this video I’m trying to figure out if the guy who decided to drive his rig through at least five feet of water in this video had some brass hanging between his legs of was just too dumb to care about the negative implications. Being that he follows some of the deep water “rules” like maintaining a constant speed and not driving through your own wave, maybe he had a plan. That being said, the guy had no idea what was in front of him because the water was very much deep enough to completely cover cars, fire hydrants, and whatever other obstacles you can think of.

Now obviously all of the electrical systems on these trucks are weatherproofed at the factory but are they designed to be completely submerged? Think that this rig had some weird electrical issues down the road during the weeks after this stunt? We’re also wondering how much water the thing took on during its trip. Unless the doors seal exponentially better than car doors this truck was carrying some pretty good water volume in the cab by the time he gets into the “shallow” stuff, right?

We’re sure if the fleet manager saw this video the driver would be out on his arse. One thing I do know for sure? If I was the guy in that seat, the truck would have stopped when the water reached the lug nuts not the base of the windshield. Wow!

PRESS PLAY BELOW TO SEE A TRUCKER TAKE THE PLUNGE AND PLOW THROUGH WATER TO THE OTHER SIDE!

BangShift Daily Tune Up: The Demonics - Formaldehyde Injection Morning Symphony: Who Would Be The First To Hop On This V-Twin Racing Lawnmower?

3 thoughts on “Calculated Risk Or The Luckiest Trucker In America? Watch This Rig Plow Through Water Up To Its Windshield!”