(Words and photos by Tom Lohnes) – The Chevy van has been a staple of the company lineup since 1961. The original unit was a rear-engine, flat-six powered van based off of the Corvair chassis. The second generation of the van was basically the same, but this time offering V8 power and revised looks. The third generation of the van came out in 1971, and its front engine design and boxy front end begun to take shape into what the modern Chevy van would eventually turn out to be. 1978 brought another redesign, but not nearly as significant as its older brother. This generation of van would run 24 years, to later be replaced by the Express van in 1995. It hasn’t had a significant update since 2003, but now there is one. Starting in 2021, you can option a 401 Horsepower, 6.6 Liter gas V8 into an Express van.

For reference, in the last couple years, the top engine in the Express has been the tried and true 6.0-liter Vortec V8 making 341 horsepower and 373 lb.-ft of torque. Adding 60 horsepower and 53 lb.-ft should make this Rear-wheel drive van pretty fun to drive. Starting around $35,000, the 6.6 Liter V8 is not quite ready to be offered yet so don’t go hustling to the dealer tomorrow to score one. Currently you can get a 2.8 Liter Duramax I-4, the ancient 4.3 Liter Vortec V6, and the aforementioned 6.0 Liter Vortec V8. The 6.6 is not new, just simply ripped out of the heavy-duty Silverado trucks.

In conclusion, don’t let your Civic get gapped by a van. Watch out for any Expresses you see on the road, because they could very well be packing this monster of an engine. Ford also offers a variant of their Transit van with an Ecoboost 3.5 Liter twin turbo V6, but the Transit is Front wheel drive. The moral of the story? Watch out for an American van, the dude at the flower shop may take you down at a test-n-tune night at the drags. 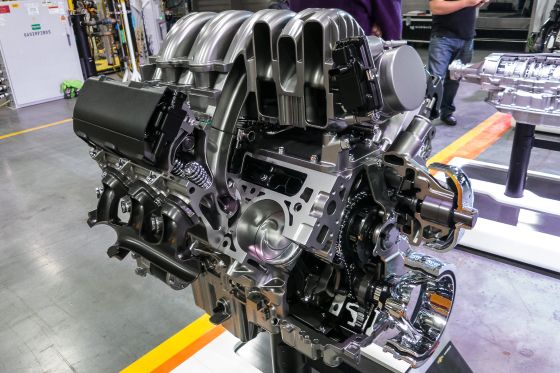 Take A Look At The Basics Of Pushrod Length Importance When Building An LS Engine Dyno Test Video: Measuring The Gains Of Roller Rockers On A Hot Rod Stroker Jeep Inline Six Engine