Citizen’s Band: The Internet of the 1970s 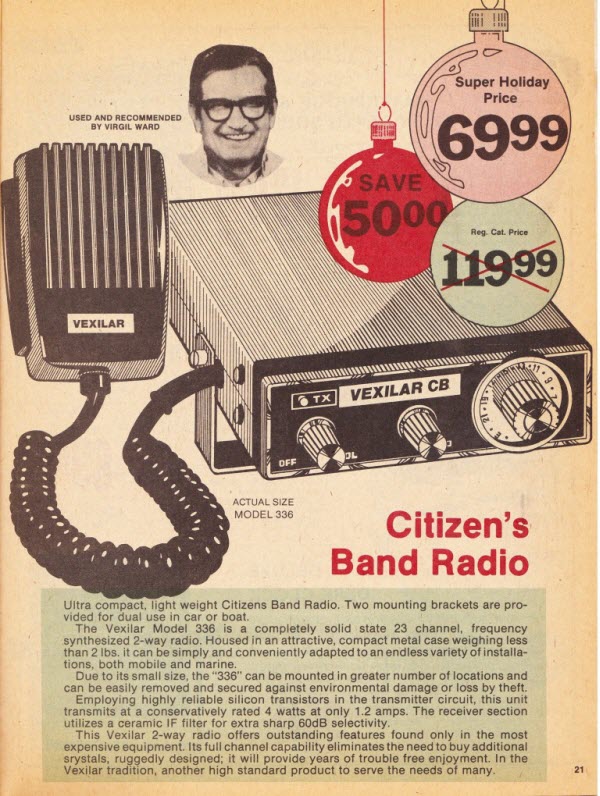 Unless you were sitting up and taking oxygen between about 1973 and 1978, it is impossible to understand just how pervasive the Citizen’s Band radio was in that period. It reached every corner of society, from Main Street straight on up to the White House, and touched every corner in between. It put Americans in touch with each other unlike any period in our history, until the widespread adoption of email and American Online came along in the late 1990s. BangShift presents a quick look into just how omnipresent the CB radio was, and how quickly it disappeared:

Folks, 1973 was a time when a “telephone” was a thing you had to pull over to use, while standing inside a hot, glass box. To minimize the time out of a truck, truck drivers had started using Citizen’s Band radios, which were around since the close of World War II thanks to the FCC’s regulation of a personal radio service.

CBs started to hit their stride in the 1960s, and their usage amongst truckers became pretty much ubiquitous by the early 1970s, serendipitously when the first Oil Embargo hit, and just as the nation was lowering the national speed limit to 55. 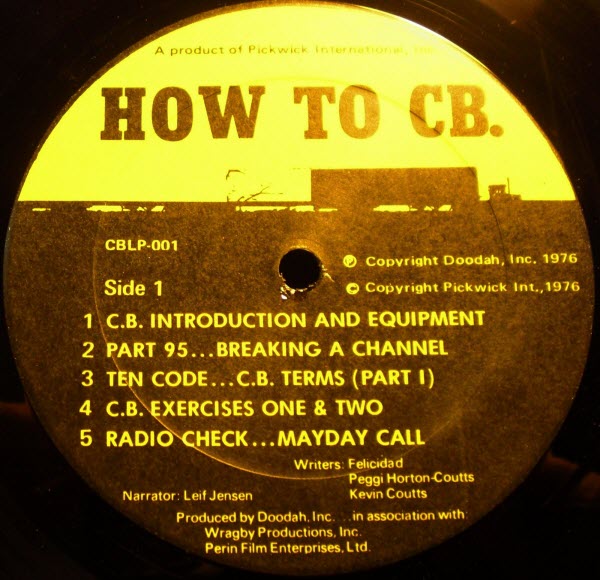 Truckers were in a bind. They were looking for every opportunity to find cheaper — or even available — fuel, and they were also on ever-vigilant watch for the cops, who were writing speeding tickets at an alarming rate. The CB radio became their preferred tool of communication when all this was happening.

Right at this time, a single truck driver named J.W. Edwards, who went by the handle “River Rat,” managed to almost singlehandly organize a blockade of the Pennsylvania’s section of I-80.

Overnight, truckers became folk heroes, striking back at the government, big business and “the man” in general. 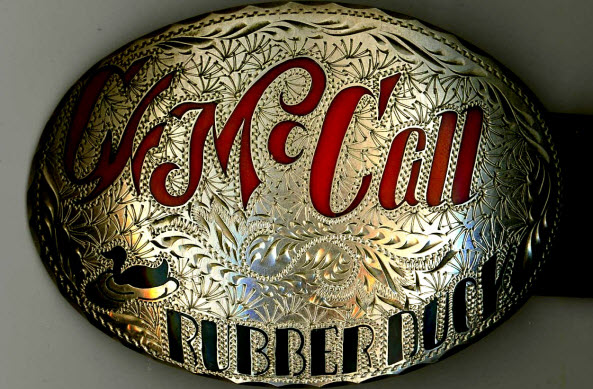 By 1975, a creative director at Bozell & Jacobs named Bill Fries wrote and produced the song “Convoy,” under the pseudonym “C.W. McCall,” a character which he’d originally created in 1973 to sell Old Home Bread via television commercials for the Metz Baking Company. The song was kind of an anti-establishment, outlaw anthem, and reached number one on the Billboard charts.

It introduced a wide swath of Americans to CB radio, and the lingo that went along with it. An we ate it up like a sleeve of Thin Mints you just got from your favorite Girl Scout.

Suddenly, CBs were EVERYWHERE. The Radio Shack catalog was brimming with CBs and CB accessories every month. If you purchased any GM product between about 1976 and 1985, you could equip it with an optional 8-track player — we’ll cover that whole thing another time — with a four-pin, 23-channel CB tranciever handset, along with an antenna up to the task. 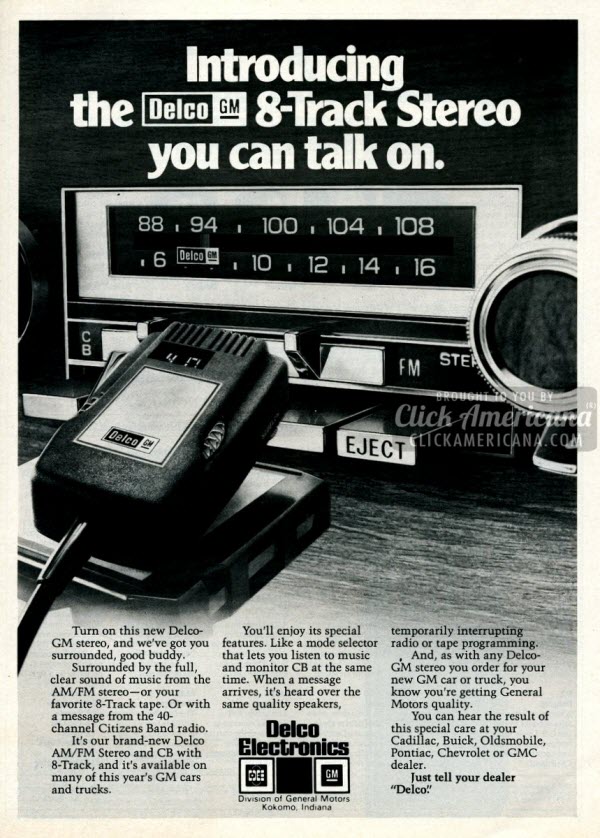 At the movies in 1978, Sam Peckinpah used C.W. McCall’s 4 minute, two second single as the basis for a nearly two-hour feature film. Yes. Sam Peckinpah. The guy who directed The Wild Bunch, Ride the High Country and The Getaway, directed an entire movie based on a song, leading other directors to use the same creative process to create such motion picture classics as Take This Job and Shove It, Harper Valley PTA and Born In East L.A. 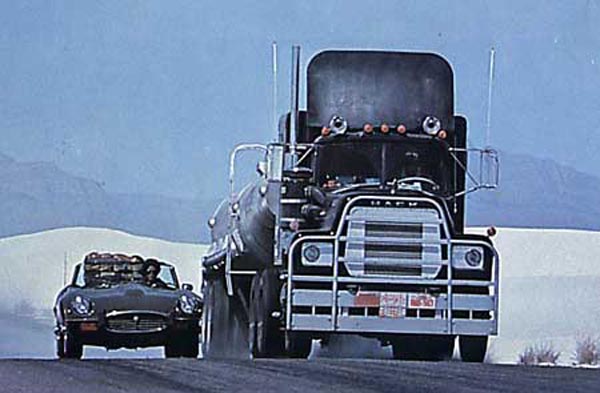 But I digress…On television, veteran actor Claude Akins — who had appeared in films like From Here to Eternity and Rio Bravo — starred in a popular television series called Movin’ On about a CB-jabberin’ trucker. A sort of Route 66 meets BJ and the Bear, the series spawned marketing tie-ins that included model kits and a line of walkie-talkies marketed to kids that worked on Channel 14 over a breathtaking distance of about 11 feet. 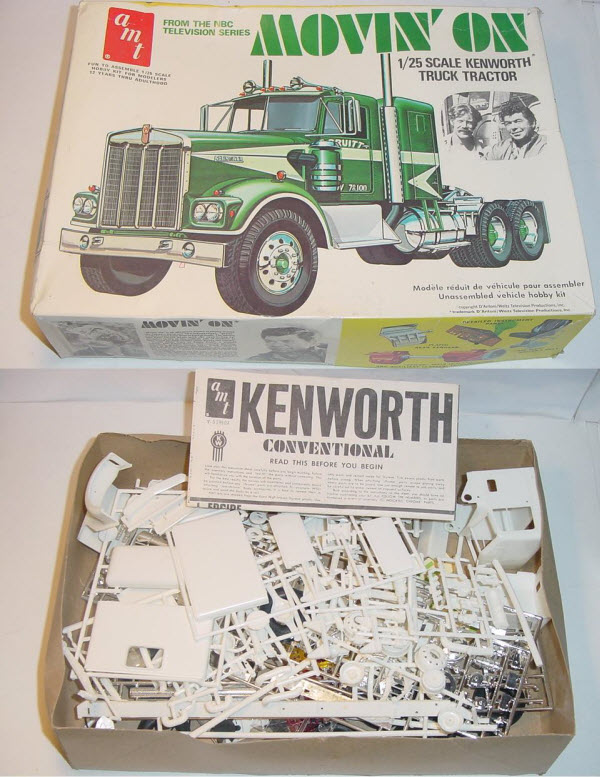 Merle Haggard provided the theme song to Movin’ On, and it resulted in a series of CB-related truckin’ songs for him, including the awesome “Bull of the Woods,” which Boston-based country music performer Roy Sludge described as “the world’s only pornographic trucking song” on the self-titled album The Country Bumpkins.

In popular culture, CB radios became our most popular means of communication. In the White House, even Betty Ford had a handle — “First Mama” — in that dark period prior to founding a clinic for alcohol and drug abusers. We ate off plates, and drank from glasses with CB lingo silkscreeened on the side. 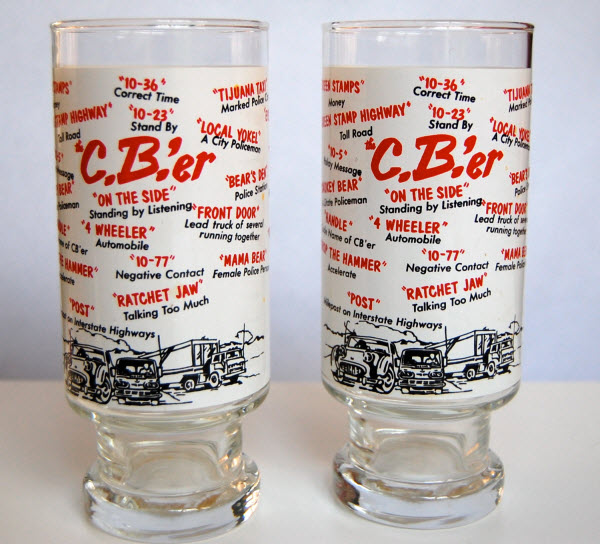 Then, as quickly as it arrived, it was gone. CB radios — which had been a cash crop for every retailer in America — disappeared as quickly as they arrived. Family Radio Service radios — which came along in 1996 — put the final nail in the CB’s coffin for ordinary Americans, and the last shovel of dirt was the widespread adoption of cell phones, then smartphones that allowed communication and texting from anywhere in the country.