How Far Is Too Far? Watch This Bronco Jump And Find Out At The 2014 Mega Truck Finals 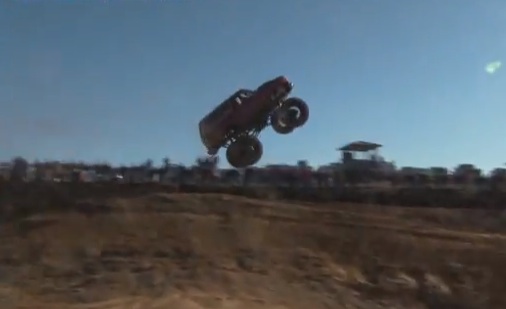 There is always such a thing as “too much”. When it comes to playing off-road, too much airtime usually results in broken suspension parts, a snapped axle or hub, and about fifty thousand dollars’ worth of chiropractor bills for the driver. However, in the case of Mark Hurston and his wild Ford Bronco, he started this particular fateful romp at the West Georgia Mud Park driving like a bat out of hell during the 2014 Mega Truck Series. He airs out the big Ford a couple of times, then he goes for one massive jump with his foot in it. The first sign of trouble appears as the back end of the Ford comes down towards Earth faster than the front. When the truck lands, the rebound springs the Bronco into an end-over-end flip and the results speak for themselves, with the back end of the truck smashed down and suspension damage everywhere. Hurston was not hurt in the wreck, and plans to be back with a new Bronco for the 2015 season.

Cheap Fun Is The Best Fun: Road Karts With Short Money Engines On Slick In The Dirt = BIG FUN (Video) - We Want In! This John Deere 317 Garden Tractor With A 2.8L GM V6 Is 100% BangShift Approved - Think It Sounds Good With Zoomies?

3 thoughts on “How Far Is Too Far? Watch This Bronco Jump And Find Out At The 2014 Mega Truck Finals”