Cheap Fun Is The Best Fun: Road Karts With Short Money Engines On Slick In The Dirt = BIG FUN (Video) – We Want In! 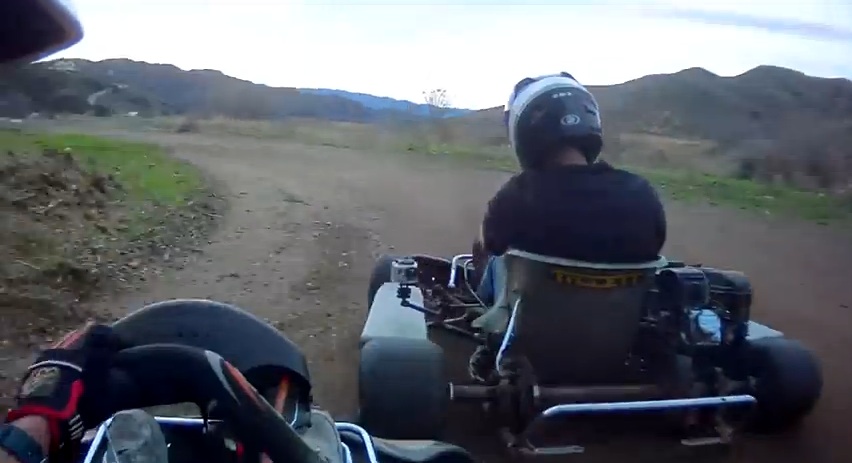 Recently, Chad and I did battle with a host of other guys at a karting event during the PRI show. While neither of us were the fastest in the group, we weren’t embarrassed either. Every time we mess around in karts we always get the jones to look for one on eBay and then cooler heads seem to prevail. Thanks to our friend Jason Lewis, those heads just got hot again. Jason has been no stranger to BangShift over the years. He’s the guy who had the Maverick V10 project, and has been involved in fabricating stuff for Travis Baumgartner’s amazing parachute jump, along with who knows what else. He’s also a talented film maker who has worked with Hot Rod and other entities in the past making great video. This could be his masterwork and it is perhaps the roughest cut deal he has ever put forth. Why? Because of the pure low-buck hot rodding genius of it.

What you are looking at are a pair of road racing style karts being raced on a homemade dirt oval track, on slicks, and powered by cheap ass four stroke engines that were bought from Harbor Freight. If you want to look around for kart chassis that are lacking a motor you will find some smoking deals. Yes, it took fabrication skills to get the four stroke engines to mount where high winding two strokers would have been living before but the results are awesome as this video demonstrates. As fun as these are on a dirt oval, can you imagine them on a short road course? Of course you can because you have probably raced similar machines yourself at a local karting joint.

The total investment in the karts is not given but it cannot be much. The level of dollars per smile here is insanely low and we think that this is some juju that could spread, and fast. This looks like a hoot!

My buddy Jim is in the #46 black and orange kart and I’m (Jason) in the grey #26. Jim has been grooming the track like a mad man since the last rains here and finally talked me in to cruising by to check out the new wider layout and have some fun dicing it up around the oval.

It took a few laps for me to get up to speed but Jim showed me the fast lines and within a few minutes we were racing pretty good. There are a few Bump and Runs plus a bunch of Crossover moves here and good times were had by all!

The Karts are standard road based racers that had finished their useful lives and were in the shed at the ranch. Then we got some Harbor Freight 4 stroke motors and made special mounts to adapt them to the Kart chassis. Now we have bullet reliable dirt machines to thrash on. The slick tires keep things interesting on the dirt and since we already had them, kept the cost down by not needing to buy dirt specific tires.

Scrapple, Your Guide To The "meh"-worthy News: Last Call For 2014! How Far Is Too Far? Watch This Bronco Jump And Find Out At The 2014 Mega Truck Finals

5 thoughts on “Cheap Fun Is The Best Fun: Road Karts With Short Money Engines On Slick In The Dirt = BIG FUN (Video) – We Want In!”