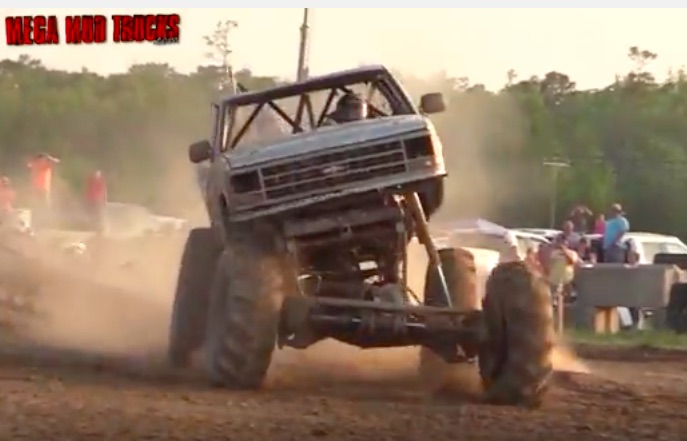 We have showed you a ton of cool mega truck videos over the years of the machines leaping into the air and landing like no big thing. Well, we have finally found the limits of at least two trucks and they are displayed in this video. The footage was captured at Dennis Anderson’s Off-Road Park and it features a couple of wicked trucks hitting a massive dirt ramp at about their maximum velocity. Both of them suffer huge suspension damage on the landing but they also achieve multiple seconds of hang time in the air. Oh, they’re both still running and “driving” at the end so in that sense they “made it”.

The funniest part of the video is at the beginning when you can hear Anderson telling the safety personnel to have their fire extinguishers ready. Yeah, that’s the big concern right then. Not the 10,000lb truck flying through the air getting ready to kill everyone, a fire extinguisher on something of this magnitude would be like taking a whiz into the tide in an effort to fight it back.

The first truck lands and you can see the massive remove reservoir shock absorbers basically explode or explode the seals out of themselves. The hydraulic oil pumps out repeatedly as the truck rocks back and forth. That looks expensive. The second truck is the one featured in the lead photo above. It gets knocked completely out of square and looks kind of hilarious hurtling across the course.

We have no idea what the prize for this madness was other than the undying respect of the people in the stands but either way these fellas are out a few bucks and some shop time to get their rigs back up to snuff.