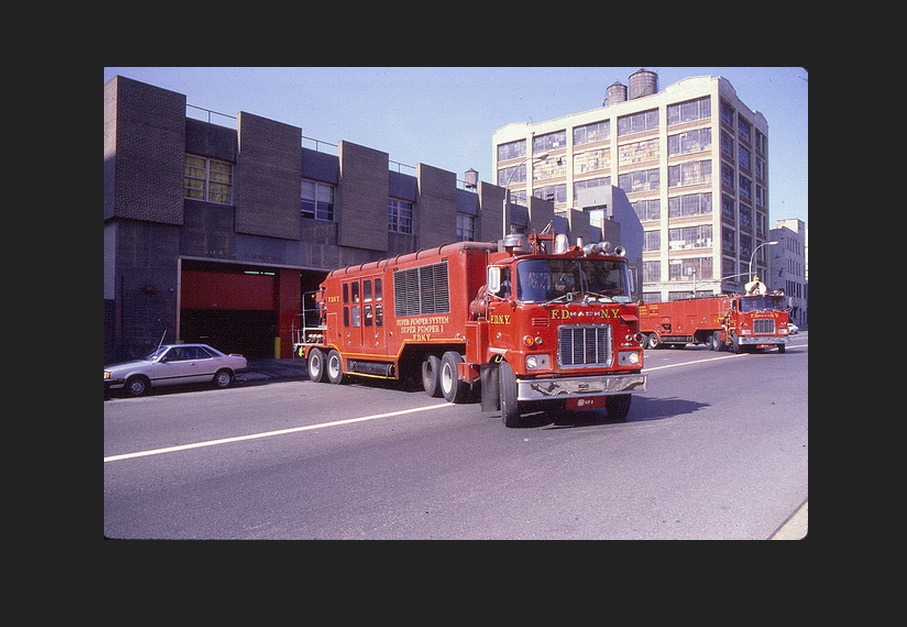 (Lead image: Philip Goldstein) – In the early 1960s the New York City Fire Department was facing a host of problems. The world around them was growing ever taller, ever more compact, and ever more dangerous with respect to fire. There were times when the very infrastructure that was supposed to be supplying them the water to extinguish a blaze simply stopped flowing, there were other times that the equipment they had proved to be woefully insufficient to stop a fire that should have been controlled, resulting in massive blazes that ate up homes, businesses, lives, and millions upon millions of dollars. In April of 1963, a massive fire on Staten Island taxed the city’s fire service to the absolute breaking point while destroying millions and millions in property. 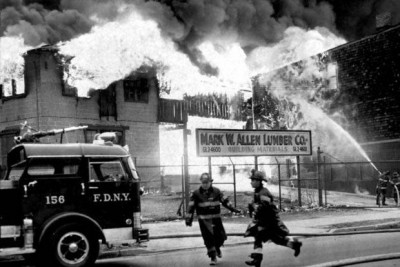 Black Saturday on Staten Island. It was this catastrophe that led to the city’s approval to spend the money on the Super Pumper sytem.

The day is still referred to as Black Saturday by the people who lived through it. Due to the lack of suitable water supplies, the fire was far larger than it should have been. There was a drought that year and many of the sources that the firemen were used to pulling water from had literally run dry. This began a series of events that led to the construction of the most powerful land based fire fighting truck ever created, the Mack Super Pumper System. It was actually five trucks that worked as a brigade to battle the worst flaming disasters that the city could throw at it.

From 1965 through the early 1980s, the Mack Super Pumper System responded to more than 2,200 calls with more than 900 firefighters serving to operate it in some capacity. The five trucks that made up the super pumper system were a massive, locomotive-engined central pumping truck, a tender truck full of hoses, manifolds, and other gear, and three satellite trucks that looked like standard fire engines but were not equipped with their own pumps. It cost the city of New York $875,000 when it was new and we’ll wager to say that it was probably the best money ever spent to keep Gotham safe. There’s never been anything else like it.

The keystone of the whole operation was the massive central pumping unit that could draw water from eight hydrants at once, drop lines into bodies of water, supply a mind-boggling number of lines with water simultaneously, and flow over 10,000 gallons per minute at low pressures if the situation called for it. When the pressure was ramped up to to 350psi, it could move 8,800 GPM. This was enough to supply the other satellite trucks as well as feed a massive water cannon on the tender truck that could heave water over 600ft. That’s right, nearly and eight of a mile in whatever direction you wanted it to go. How was this possible? It was possible because of innovations in diesel engine technology during WWII. The grunt for the Super Pumper system came from a Napier-Deltic diesel engine. This was an engine designed by the British during WWII as a lightweight, high speed means to propel their ships. Making 2,400 horsepower and even more prodigious torque numbers, the engine was “light” enough to be mounted in a trailer behind a tractor and carted around. The Napier-Deltic was used to power locomotives and other massive land craft as well for a while. The engine’s design is interesting in the fact that it had three crankshafts and was an opposed piston style engine meaning that the pistons travel at each other. With turbochargers and a two stroke design, it was as mighty a compact piston powered engine the world had ever known to that point. It was thirsty and noisy as well. When working at full song, the engine would consume 137 gallons of diesel fuel per hour and the noise was so deafening that firemen near the truck had to wear strong ear protection to prevent hearing damage. 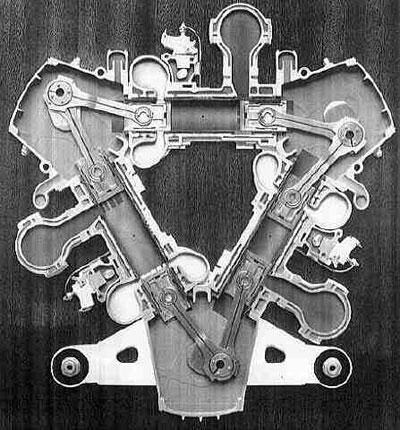 The Deltic layout that doesn’t seem like it should work at all but was perfect for what wartime needs and the needs of the Super Pumper were.

Mack was awarded the contract to build the truck in 1964 and by the end of the year, the unit was nearly ready to hit the streets of NYC. The tractor employed to drag the pumping unit around was a F715FSTP cab over that used a 255hp Mack END864 engine. The top speed of the whole rig was 42mph but since it was intended for responding to calls in the city, high mph was not as much a concern as maneuverability, and the ability to zip around at lower speeds happily. There were custom built PTOs to power the priming pump for the water pump and to to run an air compressor that needed 450psi to light off the pump engine.

The custom built trailer housed the engine and all of the stuff needed to keep it alive like the cooling system, fuel tanks, etc. At the rear of the trailer was the enormous six stage pump which was built by a company called DeLaval and that’s where the real magic happened. When the big Deltic was put to work turning that bad boy, fire, at least any on the first 60 stories of a building, didn’t stand a chance. The whole rig weighed in at 68,000lbs and for as much reading and research as we have done, there are no accounts of it ever faltering, failing, or leaving firefighters without the resources they needed to battle a fire. Often times we read about awesome machines like this and discover that they were unreliable or prone to fail but not this big guy.

Some pretty stunning facts about the truck and the pumper:

During a fire in the Bronx, firemen laid 7,000ft of hose to get to a suitable water supply and the truck pumped as though it was dipping its feet into the ocean.

In 1967 the Super Pumper responded to a fire at a postal annex in NYC and managed to supply water to the massive gun on the tender truck, its three satellite units, two tower ladder trucks, and a portable manifold with multiple hand lines all by itself.

The hoses on the truck were pressure tested to 1,000psi of pressure but typically operated anywhere in the 350-800psi  range depending on the situation. This is way higher (by several times!) what modern trucks use by our understanding. The hoses were a derivative of hoses developed by the Navy in WWII for high pressure applications and while incredibly heavy when compared to modern hoses, they were cutting edge at the time.

The truck still exists, living at a museum in Michigan and standing as a great reminder that human beings are amazingly inventive and creative beings when forced to find solutions to problems that endanger lots of lives or lots of valuable property!

A mighty beast was he! You can see the big Napier-Deltic diesel in the back of the rig. Like a modern motorhome, there were slideouts and all kinds of stuff that happened when the unit was in position. Setup time for all of it was about an hour but once it was roaring, it handled business pretty quick.

Here’s the tender unit we spoke of above. The job of this truck was to carry hoses and equipment to hook the pumper up to whatever was necessary. Also, note the massive water cannon behind the cab. This was similar to what would normally be found on a firefighting boat! The cab could be quickly unhitched from the trailer so that it could be placed into the best position for blasting the fire with the cannon. 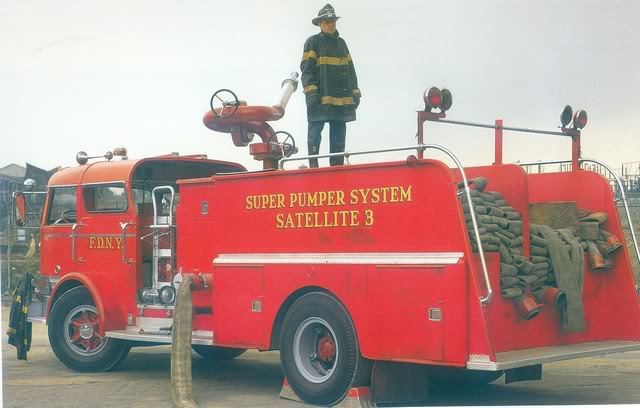 Here’s one of the three satellite trucks that were fed by the Super Pumper rig. They carried lots of hose and were not burdened with a pump of their own because the main pumper truck could supply them with more than enough water. 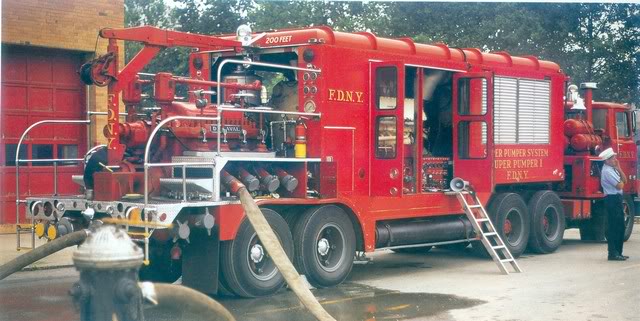 There’s the business end of the rig with the massive pump on full display. The crane boom you see was used to lift the hard lines into place when water was being drawn out of a body of water. 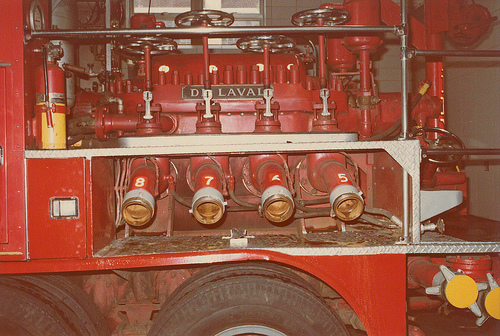 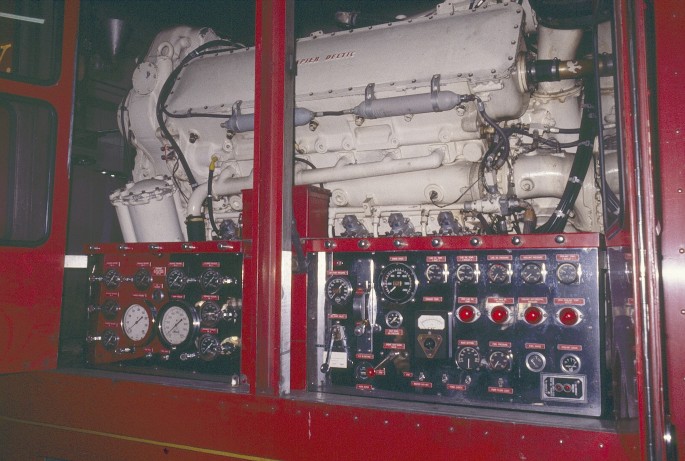 There it is, the mighty Napier-Deltic two stroke diesel power plant that did what no firefighting apparatus before or since has done. Advancing technology rendered the Super Pumper obsolete but it had a long day in the sun, battling fires in NYC and this big engine never let ’em down. These were used to power ships, locomotives, and this. 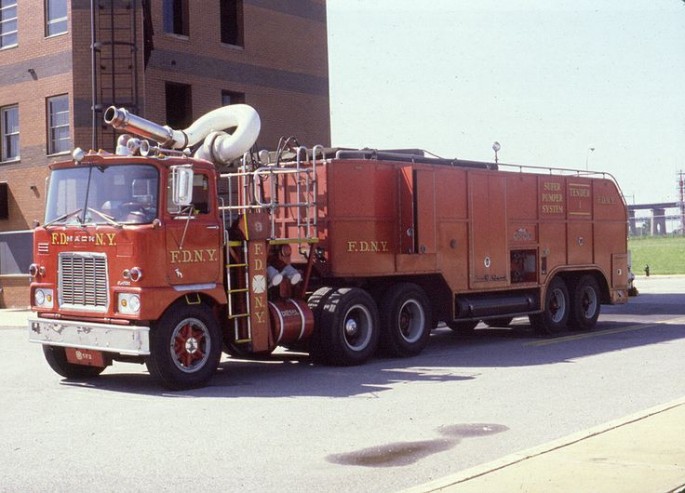 Another look at the tender truck. See the size of that water cannon?! — Image credit: Philip Goldstein 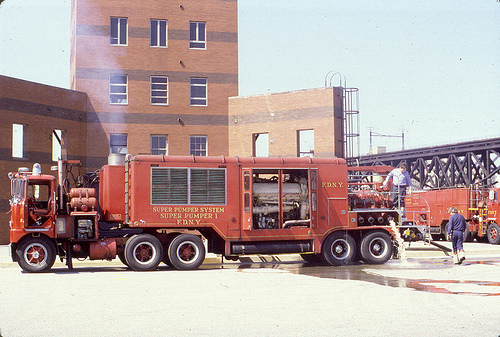 With the exhaust smoke rolling into the sky, and some water coming out the back of the truck, it looks like the rig is being set up for a training exercise in this photo. 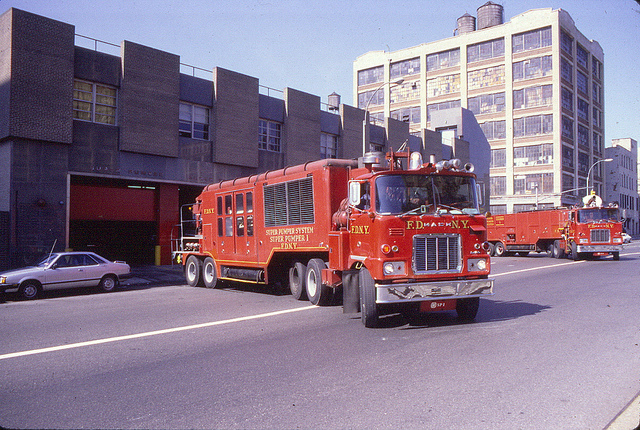 The truck, tender, and satellite units were all housed in a specially built station that was located to give them the best response time to downtown and points outside of the city. Here we see the pumper rig and tender leaving the station. The Satellite trucks would normally get on scene first to lay out their positions and prepare to get hooked to the pump. image credit: Philip Goldstein