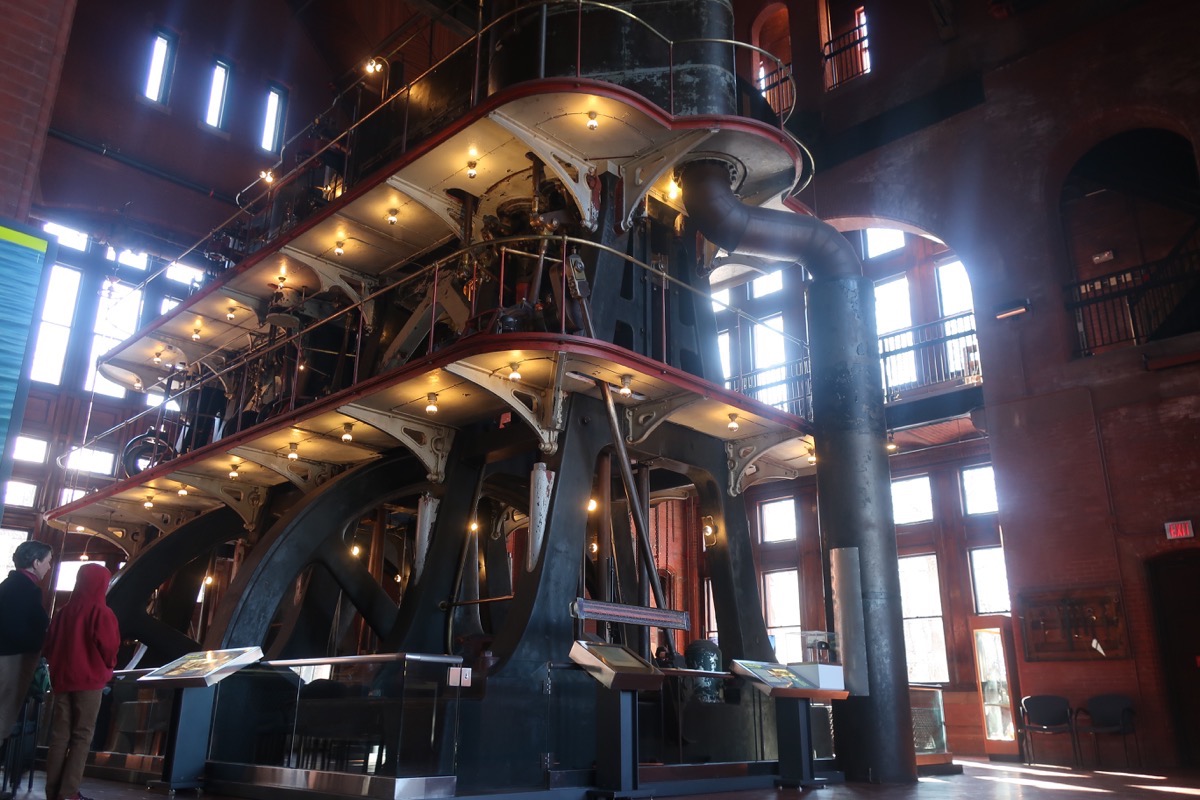 It’s always amazing when you live near something incredible and had no idea it existed. Such was the case with me and the Metropolitan Waterworks Museum in Watertown, Massachusetts. This place is a collection of three massive pumping engines that provided the water to the city of Boston for the better part of a century. We’re talking millions and millions of gallons of water per day, day after day, for decades. The engines are nearly beyond description as two of ’em stand more than three stories tall and the “small” one is a lay down style engine that was added to augment the hard work of a 5-story tall behemoth Allis piece. I have to thank BangShifter Stu Wotypka for the tip on this amazing place and for helping me and my sons kill an otherwise bone chilling Saturday reveling in the massive iron that kept Boston working.

Housed in the building that was originally constructed in the 1880s, the Metropolitan Water Works Museum looks back at how Boston not only grew, but how it developed what was the first metropolitan water works in the country. Along the way they became the first to test the public water supply as well. The building itself is grand and it grew over the years with the addition of the second and third pumping engines to the arsenal.

Let’s get to the business…the pumping engines!

(We have a full photo gallery below if you just want to see photos!) 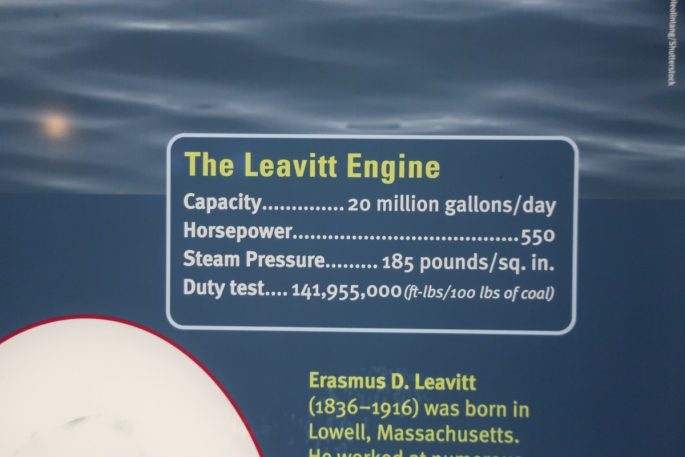 The Leavitt steam pumping engine was installed in 1894 and ran until 1928. It had a unique and complicated design because of where the building was. Seriously. Because of bedrock under the building, the pumps could not be placed in the normal location so the engine layout was modified to make it work. The connecting rode were attached to giant rocker arms. As the rods rose and fell in the engine those rocker arms actuated the pumps, moving 20-million gallons of water a day. The other weird thing about this engine is the fact that it was designed to run at like 60rpm which was almost unheard of at the time of its construction. Like all high-rpm engines it required near constant maintenance and upkeep and that is why it “only” worked until 1928.

The machine itself is beautiful and the use of dark walnut wood to insulate the pipes carrying steam speaks to an age where people did things with a level of care and quality we can hardly appreciate today. You could write a book on this engine, enjoy these photos. 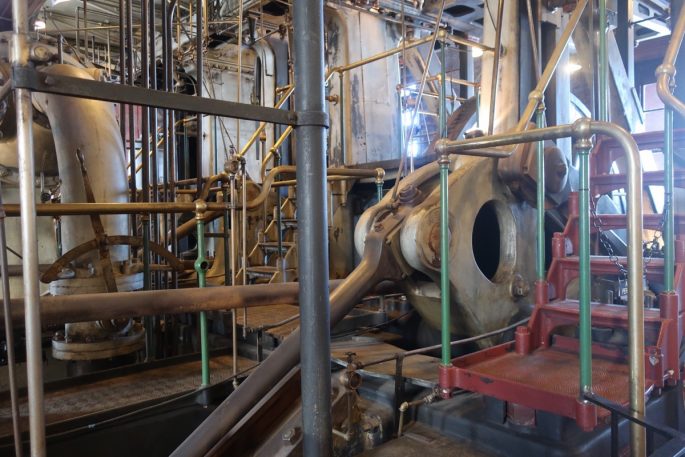 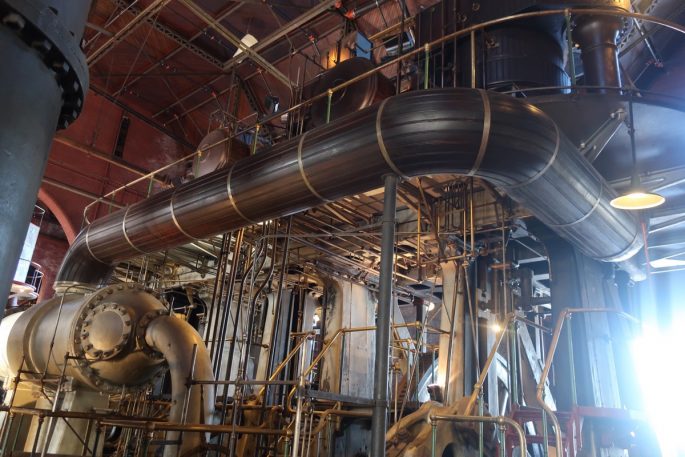 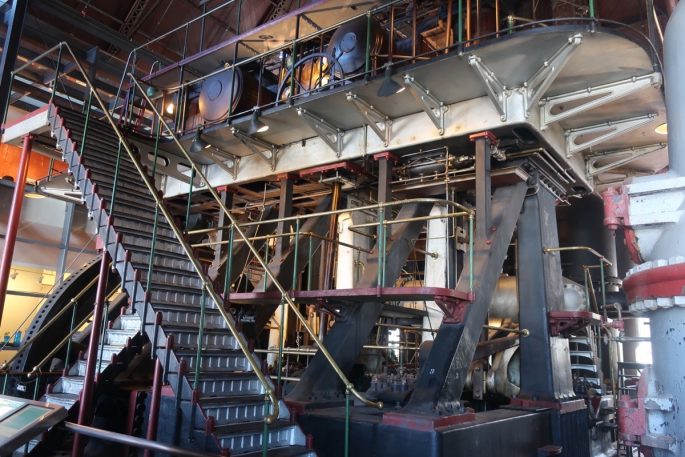 (Checkout more photos of this engine in the gallery below! 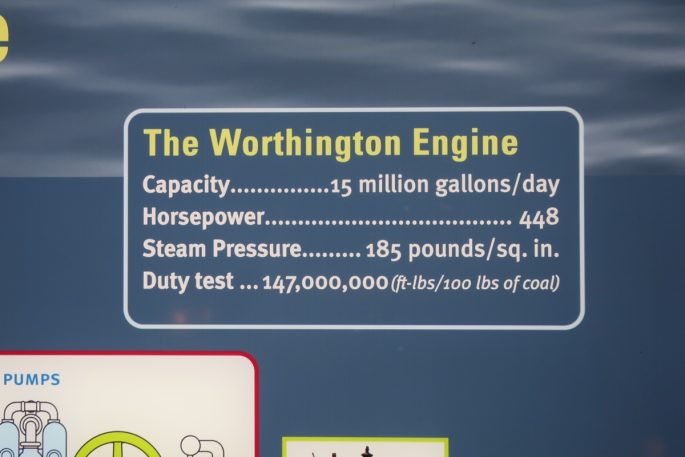 The “late model” engine in the place is this Worthington-Snow engine which has a lay down design. Added in 1922 to take some of the load off of the finicky Leavitt engine, it worked dutifully until the plant was taken off line in 1976. This machine is awesome for the fact that it shows the design improvements in steam engines over the years. While people think that steam is really antiquated and old fashioned the simple fact is that it is one of the most amazing and powerful forces that humans have ever discovered and the ways we have properly used that steam still show through in today’s world. According to a video attached to this engine, narrated by the plant foreman, this thing was rock slid reliable and ran almost silently for all of those years, requiring only the basic and planned maintenance that was recommended. Neat! 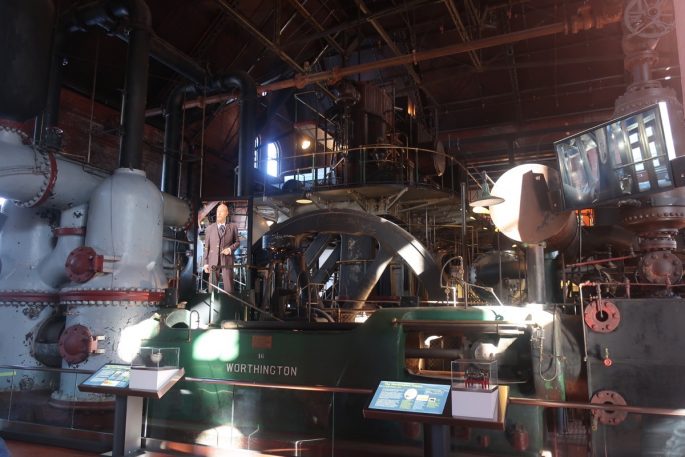 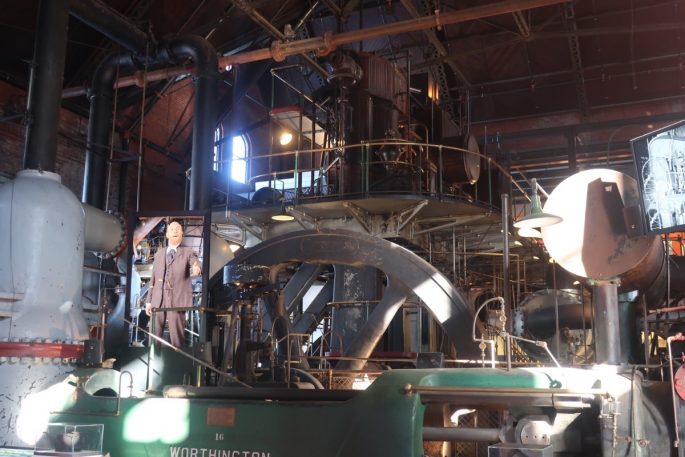 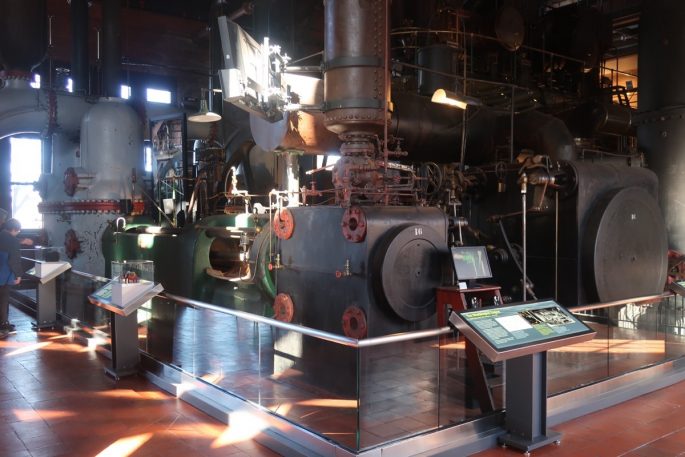 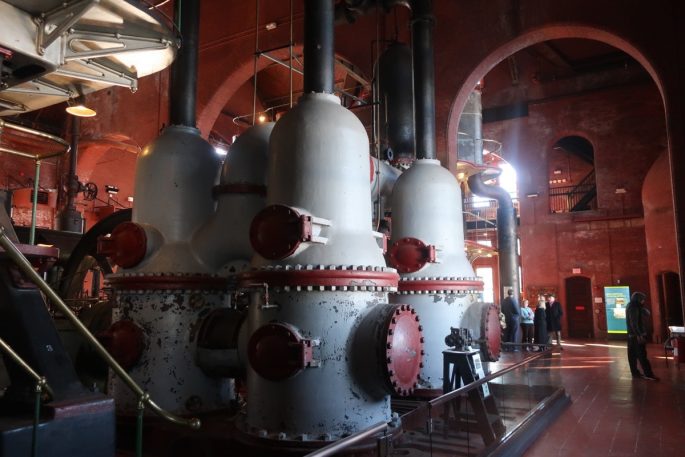 These are the actual pumps that the engine was driving. 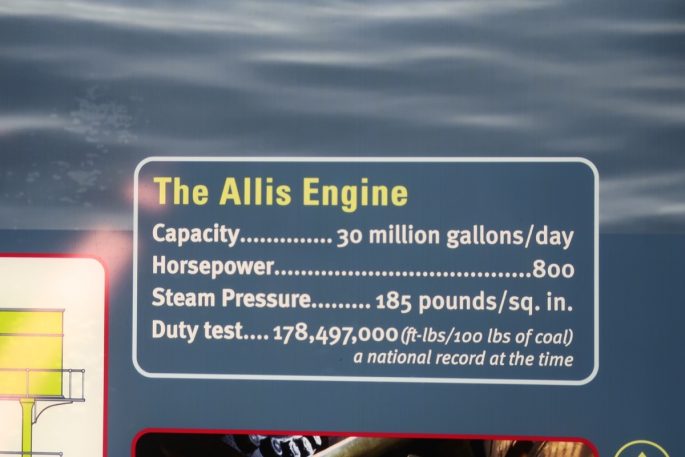 The most impressive and daunting piece in the engine building was this, the 800hp Allis engine that was commissioned in 1989 and worked right up entitle end of the pumping station’s working life in 1976. Yes, it moved 30 million gallons of water a day at 185psi through those massive pipes you can see. The engine is a total of five stories tall. Three of those stories are shown here below the floor there’s another 20ft of stuff including the pumps themselves.

This triple compounding engine burned about 500lbs of coal an hour when it was running and boy we sure we we could see it turn  over a couple of times just to watch its’s sheer girth come to life. The Allis engine is interesting as i was designed by a guy who worked for the Corliss Engine Company for many years. Corliss was one of the largest manufacturers of large steam engines in the country and when Edward Allis left the company to build his own stuff this was one of his first big projects. To say it was a success would be an understatement. The triple compounding engine is a thing of industrial strength beauty to behold. While it may lack the grace of the Leavitt engine and its aesthetics, it more than made up for it with strength and reliability.

Enjoy a full photo gallery with about 50 images of these engines below. 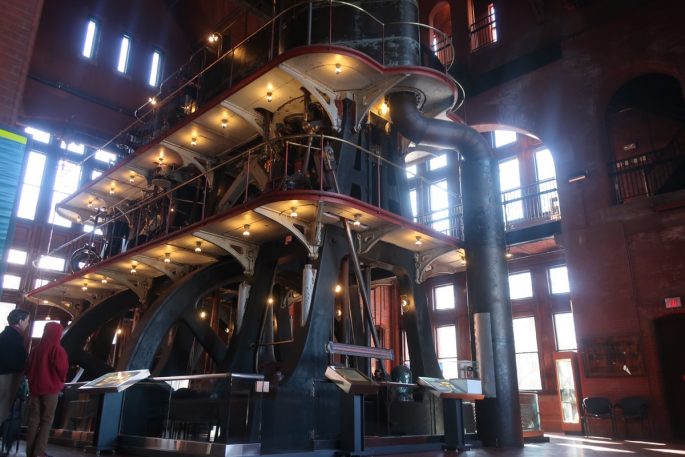 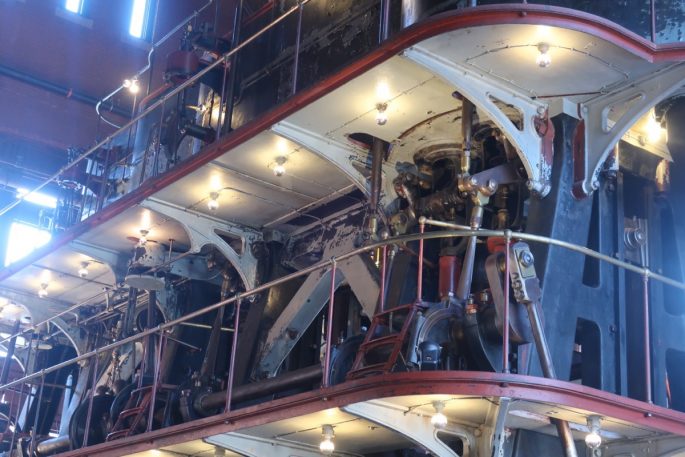 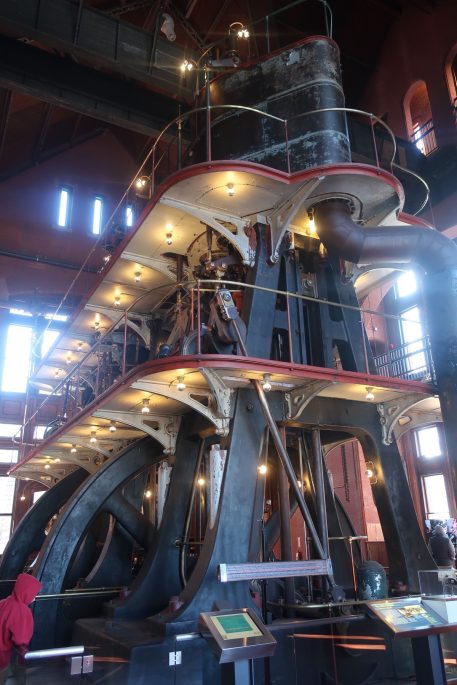 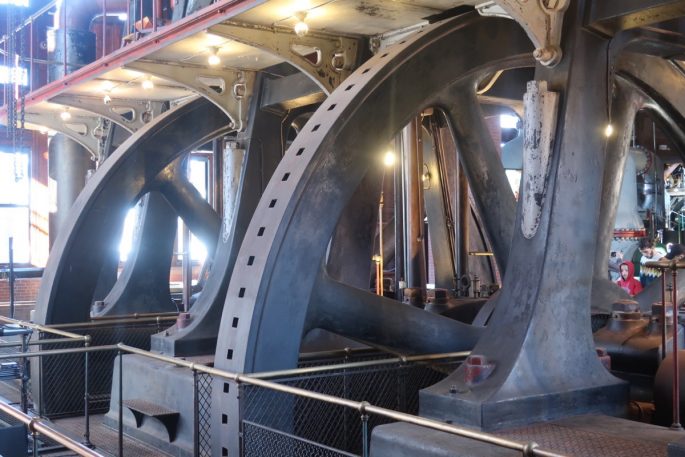 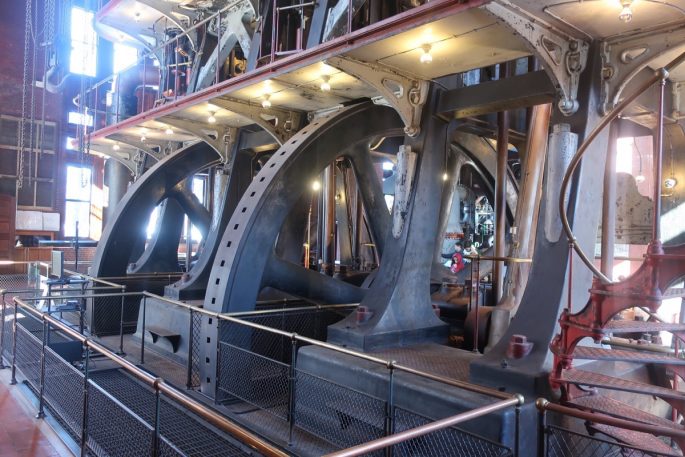 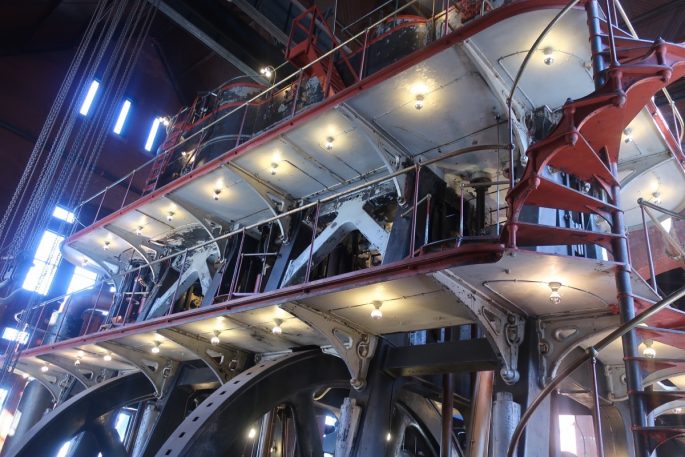 The Old Backwards Monster Truck Jump Trick: Watch Black Stallion Get it Done (Kind Of) Incredible Video: Calling These Model Trains Is Like Calling The Eiffel Tower A Pile Of Metal