Motorized Freak of the Week: The AMF Sur-Trek 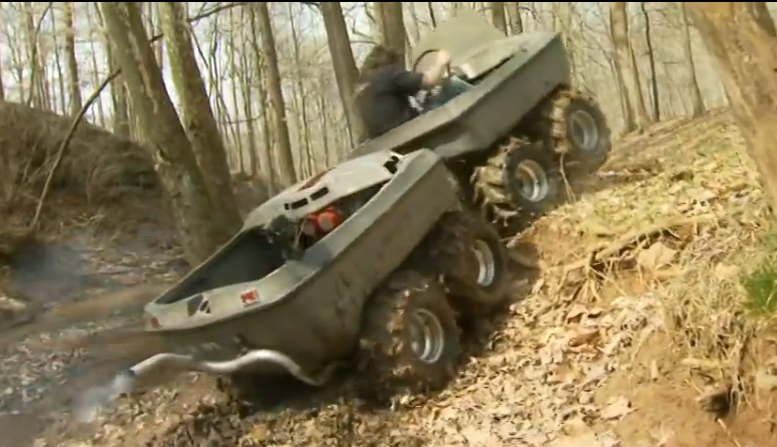 This week’s Motorized Freak is a slick little 8×8 amphibious vehicle produced by AMF in the late ‘60s and early ‘70s. It would make one bitchin’ pit vehicle at the dragstrip.

We don’t know tons about them but we’ve uncovered the technical info from an old sales brochure. We’re thinking that the guys in sales and marketing at AMF saw this little critter for the first time and asked, “Is this a joke?” How big could the market for these things be?

“Eight wheels are better than six. No joke. In hills that a six-wheeler can’t manage our eight-wheelers kick and bite and scratch their way to the top. And consider the psychological edge it gives you when you’re surrounded by six wheelers. Not mere on-upmanship. Two-upmanship.”

Yes, they were reaching.

The vehicle sat four people in what appears to be complete discomfort. It was broken into two sections, articulated in the middle, that made climbing and turning easier as well as making the thing more maneuverable.

Here’s the technical skinny. The diminutive beasts are about 11 feet long, 50 inches wide and 37 inches tall. It’s completely amphibious with a sealed hull and is capable of driving on just about anything, up to and including the lunar surface.

It sat four adults and had a weight capacity of 750 pounds. In today’s world of super sized people that’s about two.

It’s capable of 35 mph on land and a blazing 2 mph on water. It’ll climb a 45-degree grade and hang on to a side slope of 29 degrees. We’d rather not test those figures.

Automotive controls were on tap for the driver with a normal steering wheel and brake and gas pedals. It uses a two-speed transmission with a reverse gear, using its eight-wheel drive in a push/pull arrangement. All eight wheels are driving all the time.

Steering is accomplished by moving the rear section to push the front where you want it to go. The sales literature mentions it being similar to “boat tiller action.” The turning radius is 13 feet according to AMF.

Power is provided by a 295cc, 2-cycle, air-cooled, JLO engine that makes 20 hp. The engine has electric start but also a pull cord in the event you are sinking and your starter has shorted out. We’re guessing you’d get a full afternoon of fun out of the six gallon fuel tank. The whole thing weighs 700 pounds unloaded and we’re guessing that the fiberglass the body is made out of is pretty thick.

Hit the link here to see the groovy sales brochure.

Hit the link here to see one being restored. Settle This Debate: Was The 1964 Pontiac GTO The First Muscle Car? It Has Been Raging For 50 Years! New Product Action From QuickTrick: The RV4WD System Has Your Hauler, RV, and 4x4 Needs Covered - Never Pay For An Alignment Again

2 thoughts on “Motorized Freak of the Week: The AMF Sur-Trek”