Movie Truck Freak! Check Out This Weird Custom Truck Used In The Movie Tango And Cash! 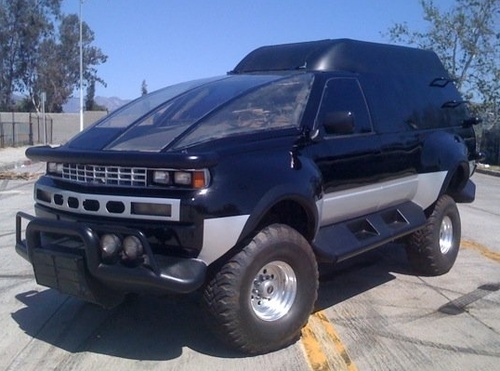 As a kid who grew up in the late 1980’s/early 1990’s, I have a fond appreciation for the great action movies of the era. My friends used to (and still do!) call these films “Tony’s Dad Movies”, because nearly every time they came over my place, my dad was firmly planted in front of the Sony Trinitron watching fools getting blown to pieces by Arnold Schwarzenegger, Sylvester Stallone, Bruce Willis, etc. Among these films, one of our favorite ones to watch was the 1989 buddy cop movie Tango & Cash. It’s completely ridiculous plot has two polar opposite cops, played by Sylvester Stallone and Kurt Russell, getting set up by a villainous mastermind played by Jack Palance. Toward the end of the movie, Stallone’s character’s sister (played by Teri Hatcher) gets kidnapped by the head baddie, and is held in a fortress surrounded by what seems to be a giant monster truck obstacle course, complete with flame throwing monster trucks, giant car-crushing construction vehicles, etc.

At the “construction site” that surrounds the fortress, there’s these late 70’s Broncos, complete with rocket pods…

This Caterpillar whatever-it-is also hangs out in the construction area, ready to crush would-be heroes…

Oh, and there’s this monster truck guy, too. He likes going off jumps while things explode in the background for no reason.

Since they can’t just go knock on the door, they need a vehicle that can handle that type of terrain. So they go to their guy at the police station, who shows them THIS THING: 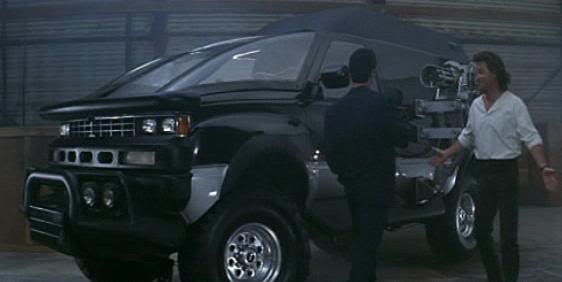 “What do you say, is it the new Bluesmobile or what?” Wait… wrong movie. But still, Look at this thing!!!

The truck is affectionately known as The RV From Hell. As a kid, I thought this was the most badass vehicle in existence! It was straight from the future, had a freaking Gatling Gun mounted on the driver’s side, and according to the character Owen who built the thing, it would run 10’s in the quarter mile on nitrous oxide. This is the type of vehicle that you want to be behind the wheel of on your daily slog to the office.

Ok, so let’s focus on the truck itself. I always wondered what it originally was before it’s transformation into this urban assault weapon. After some searching around on the Internet Movie Car Database (which RULES, by the way), I found an old For Sale ad of the movie truck. While I cannot find out who originally built it, the truck started off as a 1988 C3500 and is powered by a 454. There were three identical trucks built for the film; the one that survives today is one of the ones they took off jumps. Let’s have a closer look at this wonderful vehicle, shall we? 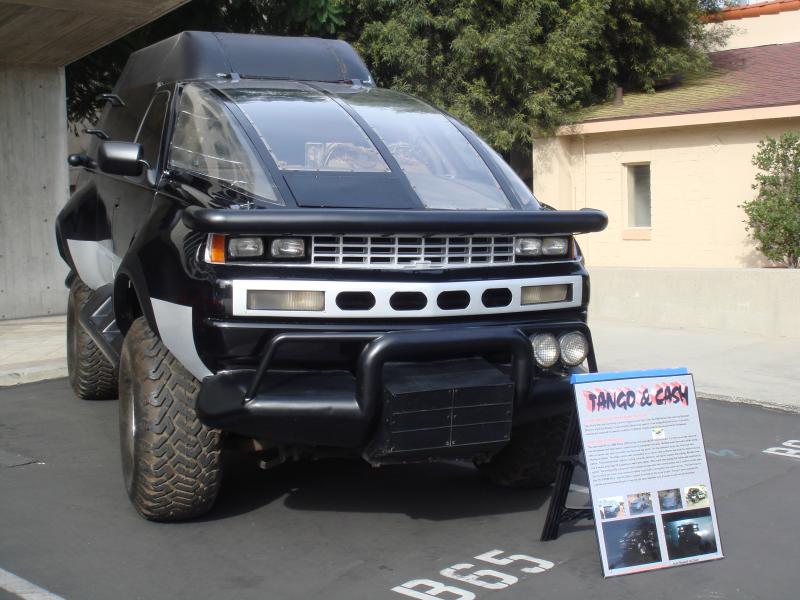 This truck is all sorts of wacky. First thing that you notice is the extremely strange windshield pod that replaces the standard hood and windshield. They cut the grille in half and mounted a custom bumper and brush guard. Then there’s the bulbous wheel flares, the custom RV shell molded into the bed, etc. Imagine if Chevy actually took some of these styling cues to market when they revised the C/K truck line in the early 90’s! 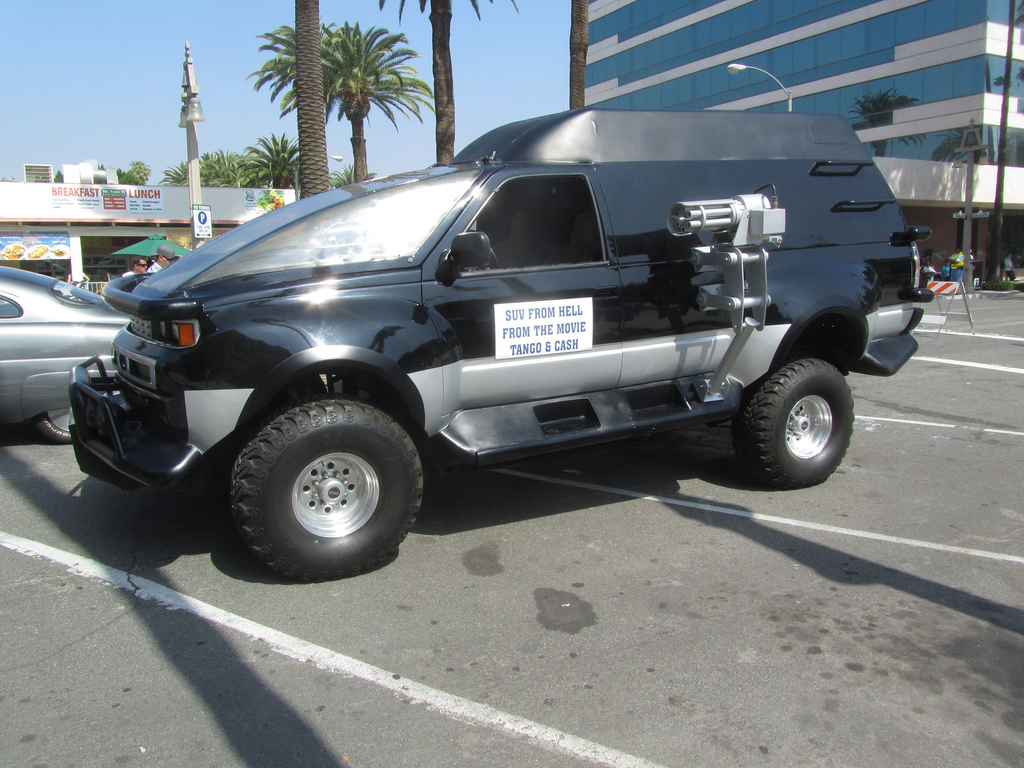 From the side, you can see that this used to be a 1988 GMT400-chassis 3500 pickup. I know some of you are probably thinking, “That’s a Suburban!”. Remember, the Suburbans of the GMT400 era didn’t come out until long after this movie hit the VHS bargain bin at your local Caldor. GM left the Suburban on the old 1973-up chassis until 1992. 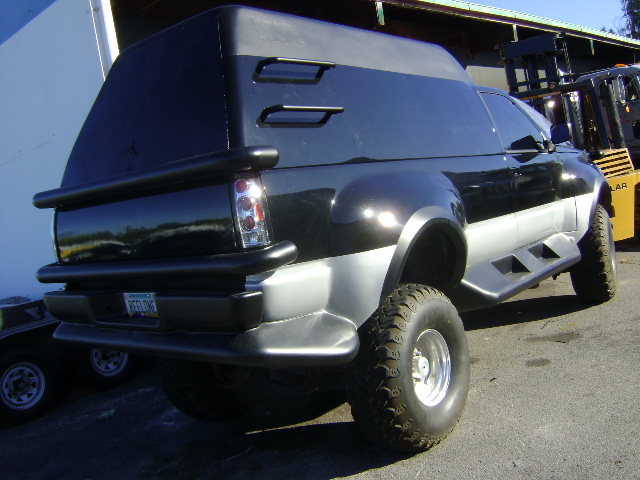 Out back, you can get a good look at the custom RV shell. I like the handles and side steps on the sides that allow for a couple machine gun-equipped henchmen to hang out back there. And, really with the “Altezza” taillights? Come on, man! 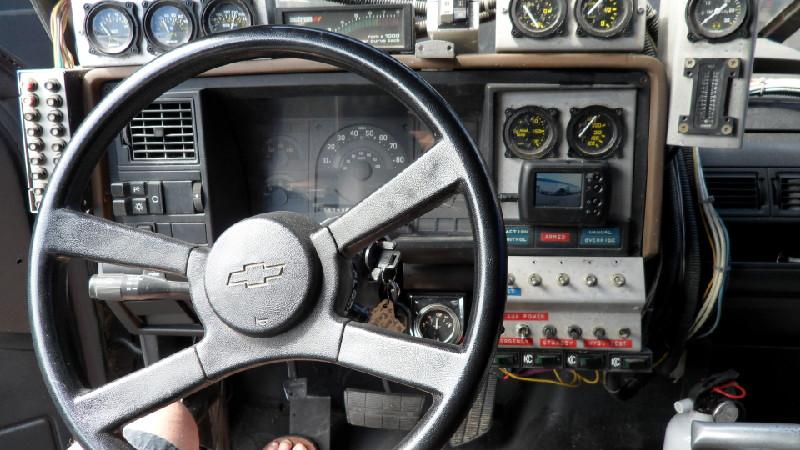 Got gauges? The only interior shots I could find for this thing were from an old For Sale ad for the truck that was used as the “jump truck”. This thing has the entire 1988 Autometer catalog on display inside. I think that little screen is a backup camera, and I sure hope it is, because you aren’t seeing out the back of this thing with that painted RV shell and that giant gun pod hanging off the side! 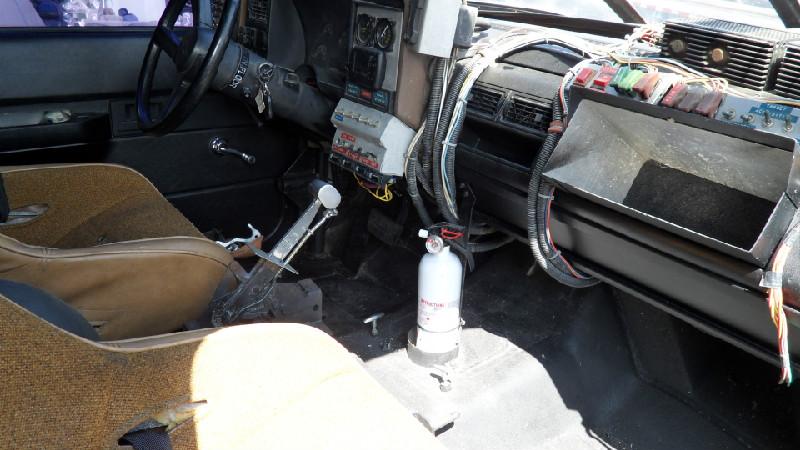 Man, there is a large amount of switchgear in this thing! What does it all do? Who knows. I don’t recall ever seeing the interior of this thing in the movie, so I’m not sure if the haphazard layout of everything is due to the fact that this is a “jump truck”, or them not caring since no one would be looking inside anyway. 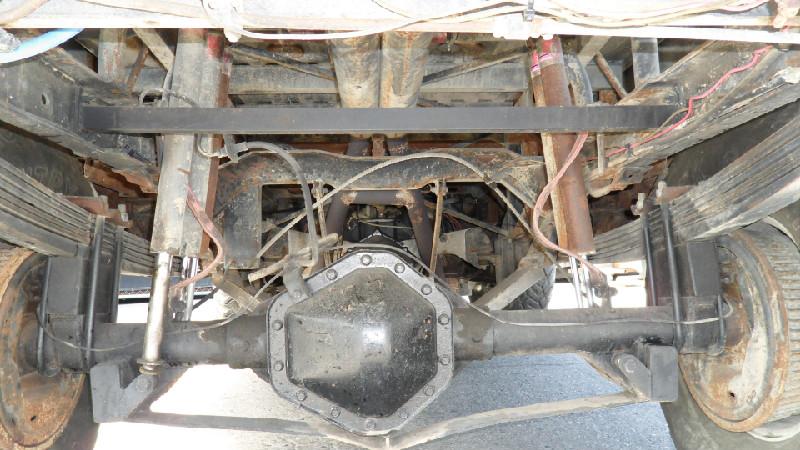 The only chassis shot I can find of the truck is right here. Parts of it look like standard 3500 fare, while other parts definitely don’t. What do you see under there?

Sadly, there are no under hood (or is it under windshield?) shots of this thing, but it’s supposed to have a 454 under that big bubble. Who knows if it really had nitrous, but it would be way cooler if it did! This beast seems to go up for sale every few years, and the last ad I saw from the mid-2000’s listed the truck at $45k. I wonder what it will sell for next?

Honestly, I feel that this truck is the star of this “Tony’s Dad Movie”. I still talk to my dad to this day about the Tango & Cash Truck and how ridiculous it is, and how I want to build a replica of it for 24 Hours of Lemons duty. I’m surprised there isn’t more info about it out there! If any of you BangShift readers have more info on this, you know what to do… post it below!

Craigslist Find: We Have Never Felt Sorrier For A Lincoln Town Car Than We Do For This One Watch The Murder Nova Wheelstand To A Win Round Win X275 During Lights Out 7 - On The Bumper At The Eighth!

2 thoughts on “Movie Truck Freak! Check Out This Weird Custom Truck Used In The Movie Tango And Cash!”