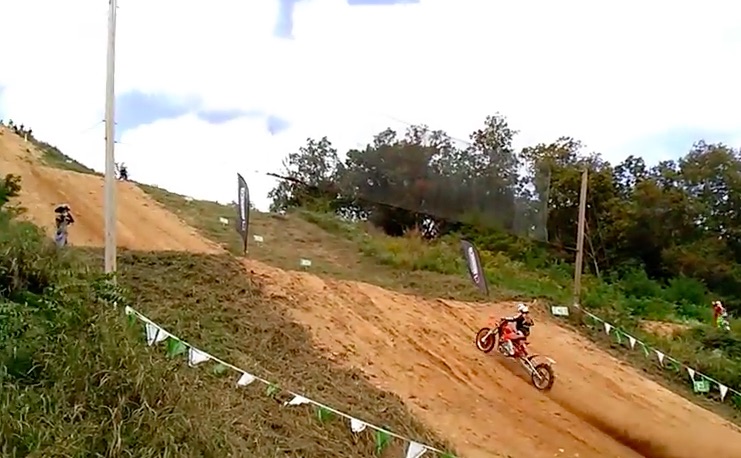 We often think of nitromethane as only being a drag racing fuel but that is really, really wrong. Motorcycle guys love to burn nitro in various different disciplines of competition. In this video we’re going to watch a nasty hill climb motorcycle based on a 1970s Triumph T140 clamor its way up a stepped slope with a 750cc engine that is running on a stiff load of fuel. The way that this thing accelerates and the amount of material it shovels out from under itself with those scooper tires will have the hair on the back of your neck standing up.

The Triumph T140 was a really popular bike that had a long production run that began in the early 1970s and ended in the late 1980s. Sold in the UK and in the USA you can still find used examples all over the place. The engine style is a 750cc parallel twin cylinder piece and while we’re sure very few of the parts in the beating heart of this monster have anything to do with Triumph, it still have the correct layout and if you have eve heard a one of these things running, it sounds like a stock bike that has been dosed up on ‘roids at idle. When the rider rips the throttle open the roar is freaking awesome.

One of the things we thought was cool was the other rider with the little air blower thing that was keeping the rider from being stuck in a cloud of his own nitro fumes. Pretty good thinking there!

We’ve never been to a motorcycle hillclimb like this one. We have certainly seen and shown plenty of videos but having never experienced it in person we’re thinking that it should be on our list of stuff to do. Hell, anywhere that people are burning nitro and running hardcore machinery is certainly BangShift approved, right?

Press play below and watch this nitro burning Triumph T140 attack the hill!

Vintage Rally Video: No Computers, No AWD, And All Sideways All The Time In The 1970s This Econoline VS Corvair Truck Video From The 1960s Proves Everything You Ever Thought About Them