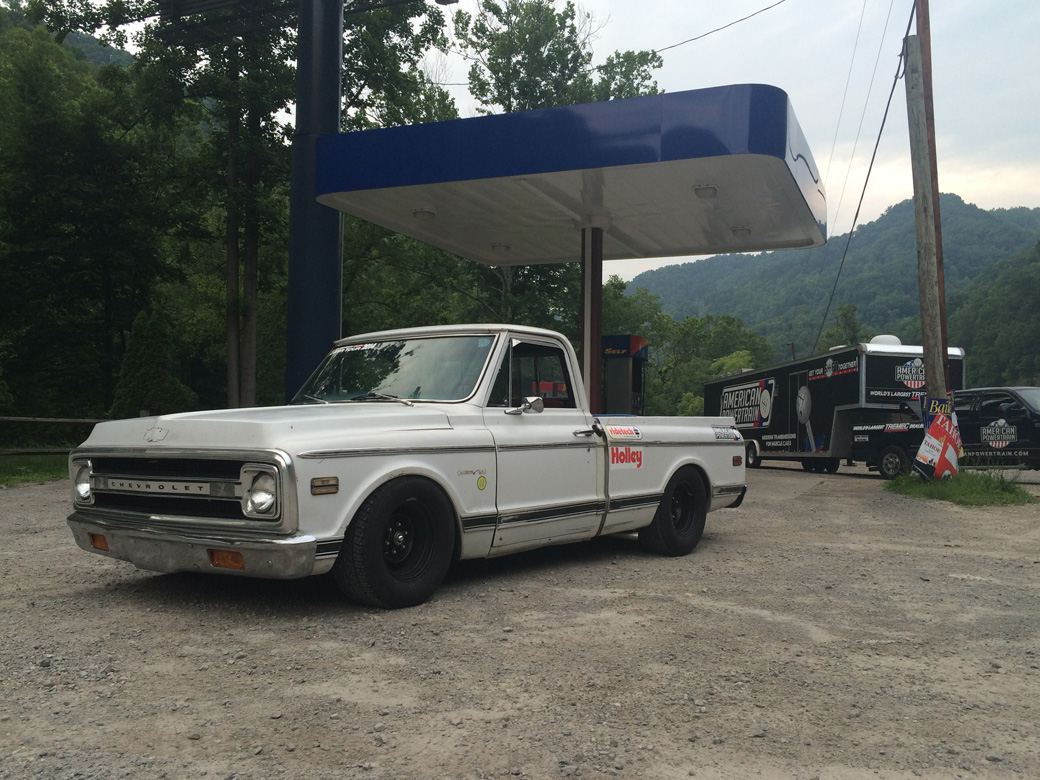 (Words and photos by Matt Graves/American Powertrain) – This will be a backwards deal. Normally you build a project car and document the build for an article then you have the payoff. Like taking the car to an event such as Powertour..Well, we built a car and you get the payoff first. Everybody wins.  So the project car (truck) we have for you is the C”heap”-`10.  We bought a cheap, cheap Chevy C10. Thrashed a bunch of budget minded parts on it and took it on Powertour. Did we succeed? So far we have, but not without drama. We will have a full build feature for you here on Bangshift shortly following Powertour. So for now you get to see our efforts come to life and see if it can survive the ultimate road trip.

The basic rundown on the truck set up is this. 5.3L LS, American Powertrain TKO 5-speed swap, Holley LS goods and Ridetech CoolRide air ride system. C10s are HOT right now. We came out with our C10 5-speed kit and wanted to show case it in a project truck. Well we didn’t have a ton of money to start out with so we decided to go low buck on the build. As you will learn from the build feature coming up things changed due to our excitement of actually buying a C10. For now here is the report from the road.

This is the 20th anniversary of Powertour. It is my 10th Powertour. My first one was in 2004. And it was an eye opening experience. I have not missed one yet. For those of you that may know or not know, I was the Cherry Bomb marketing manager for many years. We did Powertour from 2004 until 2010(during my tenure). I drove Powertour in many different types of vehicles over the years. But I learned the best vehicle to haul your gear and tools a truck is the way to go. And as you will see we used all the tools we brought.

PSSST — IF YOU ARE ON POWER TOUR AND ARE READING THIS, GO FIND MATT GRAVES AT THE AMERICAN POWERTRAIN BOOTH, TELL HIM YOU READ THE STORY AND HE’LL GIVE YOU A PRIZE….FIRST ONE THERE WINS!

WE’RE GOING TO TELL YOU THE REST OF THE STORY WITH PHOTOS! 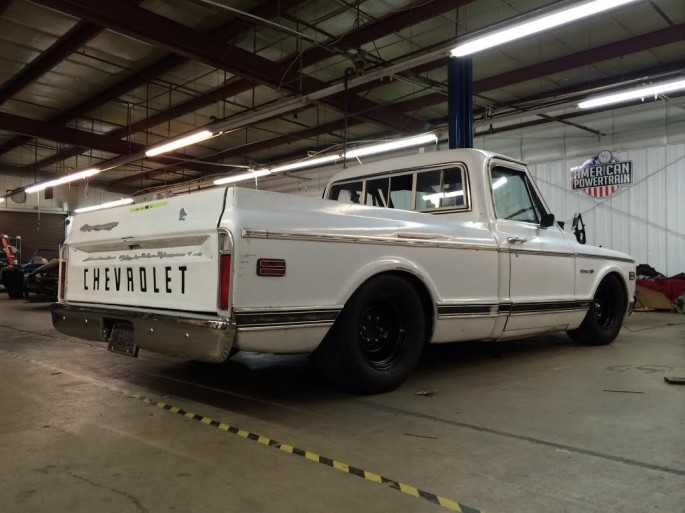 Truck just down off the lift with less than 24 hours before we have to leave for Powertour. What wheels are those? GM 4wd truck rally wheels powder coated black. I had to add this because for some reason this is the number question I am answering in the field. I just did it because it’s all we had. Two of them were bent beyond repair. I got lucky and found two more in a junk yard. 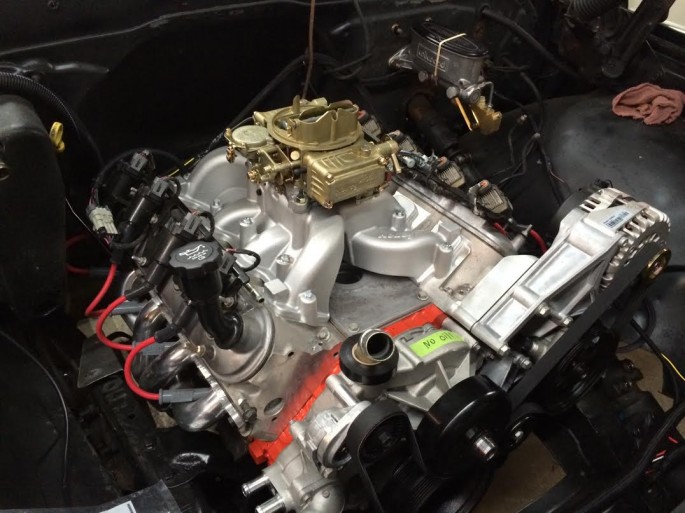 So you know what are dealing with. Basic 5.3L LS swap with Holley carb, intake and their new accessory drive which is super super nice to install. More on that whole install later… 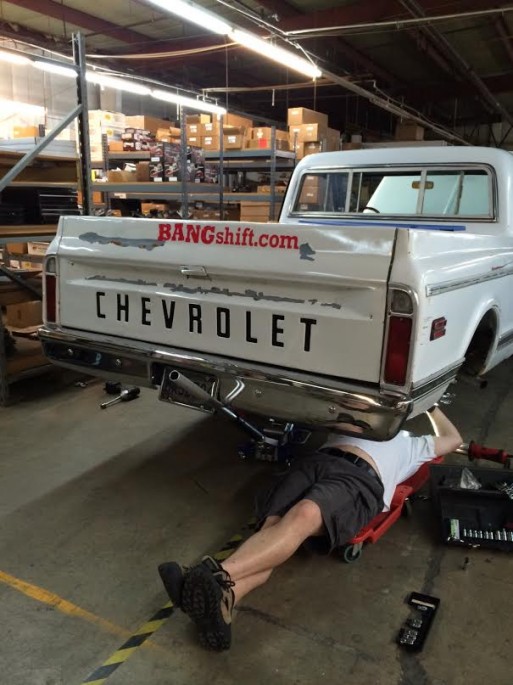 Just before we left for Charlotte we discovered the back brakes were dragging. We had to “clearance” them. In fact, the truck was running perfect until I put the Bangshift decal on the back. No joke we had a ton of weird problems happen right after that…. No, that is not me under the truck. 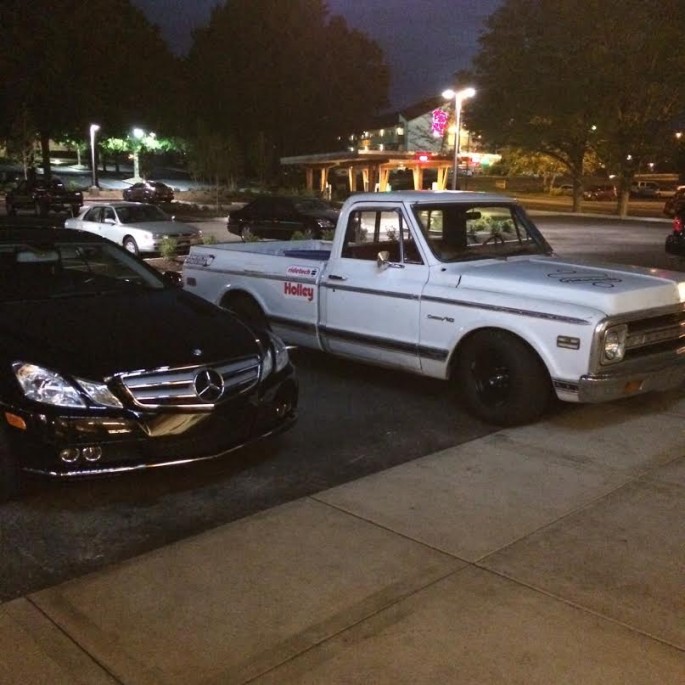 The night we left for Charlotte we hit a Chipotle burrito joint full of yuppies. They didn’t like my truck…I didn’t like them. I did like Chipotle… 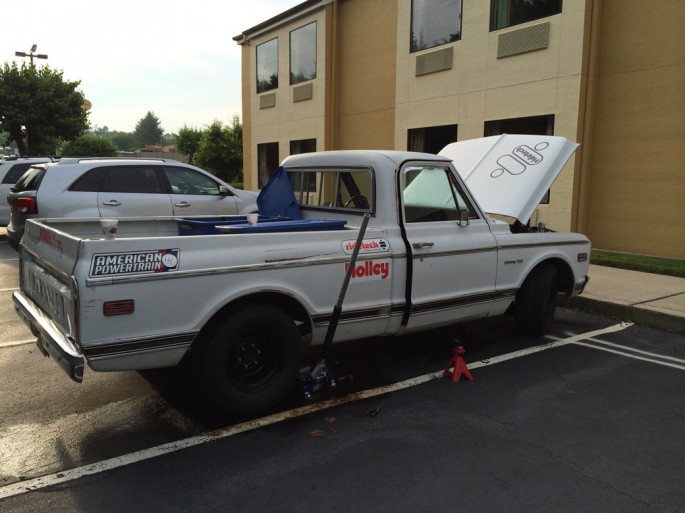 We drove most of the evening from Cookeville, Tn to Asheville, NC. Once we made the run through the curvy mountain roads the Cheap 10 starting acting like it was starving for fuel. I found a hotel and decided to fix in the morning. Turns out, we didn’t really look at the condition of the fuel tank so all that sloshing around churned up old rusty sludge. 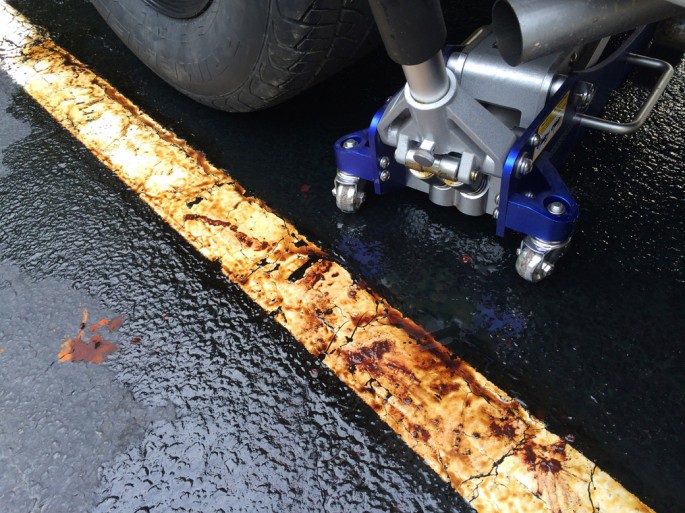 This is what came out of the fuel filter that I had luckily installed before the electric fuel pump. After drowning in fuel, rust and dirt we got the truck back on the road for Charlotte 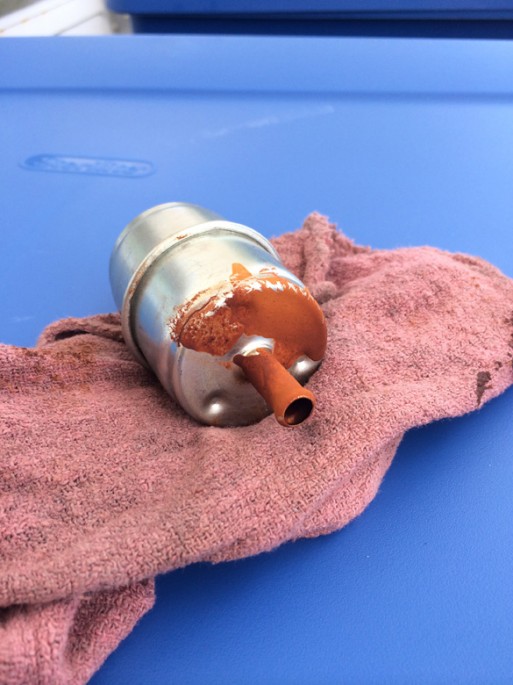 About every, say 300 miles we have to replace the fuel filters… 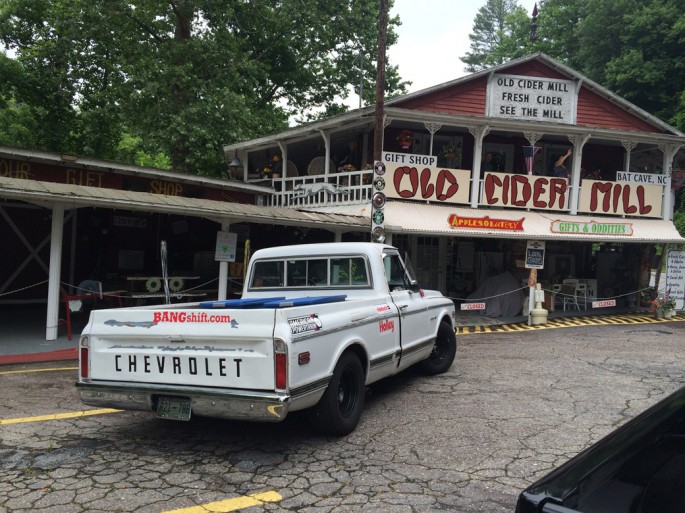 Chimney Rock, NC. If you have never been here, you are missing out. Awesome area and great drive 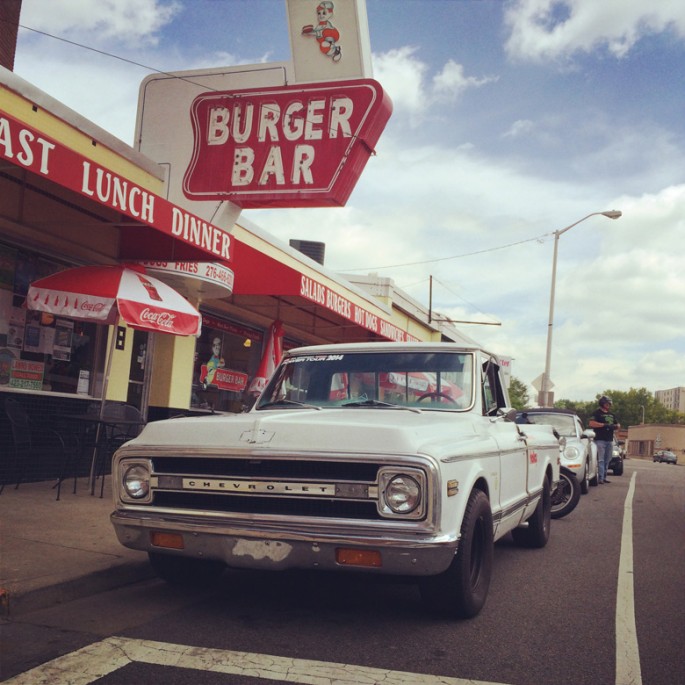 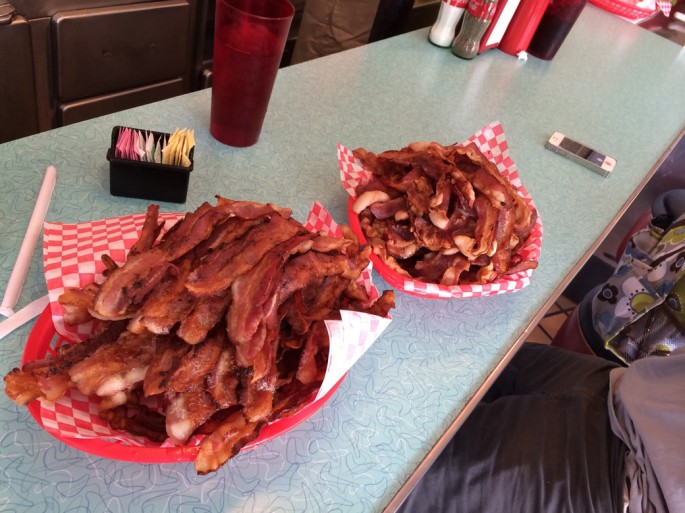 Bacon baskets…Do you need any more info??? If so you do not deserve this website.. 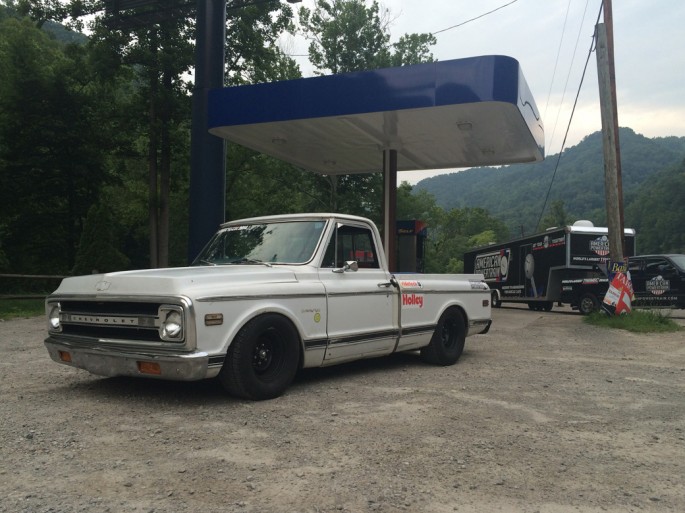 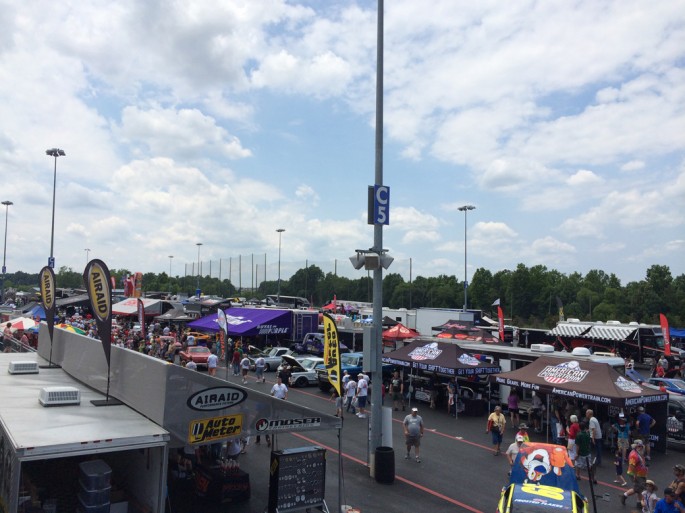 One thought on “Power Tour 2014 Road Report: American Powertrain’s Adventures On The Trail Of The Ultimate Gearhead Road Trip”