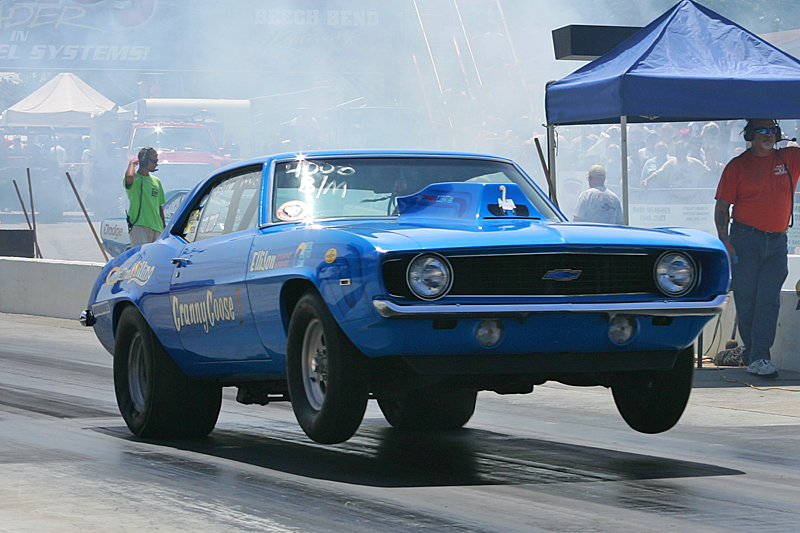 *(With our live streaming broadcast of the 2014 Holley NHRA National Hot Rod Reunion starting in two days, we have been looking back at some of the coolest cars we’ve featured from the race over the years. This one, the “Granny Goose II” Camaro is absolutely awesome and fast, too!) We’re lucky enough to spend lots of time at cool events either shooting video or photos of neat cars. During the Holley NHRA National Hot Rod Reunion, we saw a D/Modified Production 1969 Camaro called the Granny Goose II and immediately fell in love.

Modified Production was an NHRA class that appeared in 1964 and was killed off in 1981. Along the way, racers used multitudes of combinations in several different classes. While the A and B/MP cars got lots of recognition because of their ability to throw big numbers up on the score boards, it is cars like the Granny Goose II which ran in the lower classes that people remember so fondly. Why? You listen to the 331ci small block spin to about ten grand on the starting line and tell us.

This particular car was restored to the condition you see it in now just after the turn of the millenium. It was destined to live it’s life as a show car until it was seen by current owner James Payne in 2005. He managed to buy the car and despite please from the former owner to leave it as a show car, Payne did the right thing and prepped it for the track. We’re very glad that he did because it would be wrong to have this awesome piece of history used only for power parking at car shows.

The history of the car, which has been painstakingly documented by both the Paynes  and former owner Karl Thiele is awesome. Starting life as a 396/375hp “x66” code car, it ran B/Stock for a few seasons while doing some street duty with original owner Woody Bateman behind the wheel. In 1970 the car was purchased by Dave Lewis and Bruce Scott who whipped it into D/Modified Production form with a screaming small block and four speed transmission. The paint was laid on by renowned painter Bill Roell and the lettering was done by the equally respected Daubber. That pair actually painted this car three times. Firstly in 1970, then again in 1972, and finally during the resto process in 1999 (with work also being done by Doug Gumbert)! Jerry Coley and Max Hall bought the car in 1973 and raced it for several years. It then sat until the late 1980’s after being discovered by Thiele.

What made these cars, especially those in the lower MP classes so special was the combination of small blocks and four speeds. Modified Production was a heads-up class, you needed to be the baddest man on the grounds to leave with hardware. The “Goose” through both of it’s ownership regimes was a terror. It won Columbus in 1971, won Indy in 1972, the Winternationals in 1974, was an NHRA Division 2 champion, and was on the Car Craft All-Star team in 1971. This isn’t just a pretty old race car. This Camaro was a bona-fide ass kicker.

James Payne is the man who gets the credit for putting it back on the track. The car has gone a best of 10.27/132mph with Payne at the wheel. The low 10-second times are courtesy of a tunnel rammed 331ci small block Chevy. Instead of a factory four-speed this car uses a clutch assisted G-Force transmission that bludgeons a Dana 60 rear end with all the power from that screaming small block. The suspension is the same as it was when the car was campaigned in the 1970’s and judging by the way this monster launches, it works just fine for stone age technology.

Driving duties are now handled by Bill “Slow Dollar Bill” Stewart and he does a fine job rowing the gears and hustling the car down the track.

This car has a real effect on people. As we were shooting the feature photos at the end of the strip, people came wandering down to ask Bevy and James questions on the history of the car and to simply admire it. The stance is perfect. The motor, which revs to the freaking moon is perfect, and the fact that there is a third pedal and a shifter coming up through the floor completes the picture.

Click below to see a gallery of photos featuring the Granny Goose II 1969 Camaro! Power Tour 2014 Road Report: American Powertrain's Adventures On The Trail Of The Ultimate Gearhead Road Trip Bitchin' Or Bogus? Would You Drive This Mash Up Of A Firebird and A Superbird? Tell Us Your Thoughts On The Trans-Bird