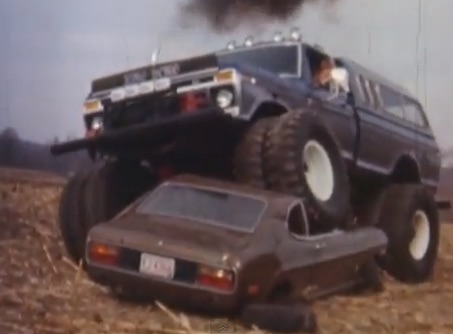 We were stoked to find this ancient video of Jeff Dane’s King Kong Ford Truck horsing around in the 1970s. This truck pre-dates the term monster truck and was one of the few vehicles, along with Bob Chandler’s Bigfoot that can be credited with creating the genre. The big old Ford had military axles under it, and a 600hp Continental diesel engine under the hood!

You’ll see Dane perform one of the earliest filmed car crushing exercises ever, the truck also does some hill climbing and mud bogging to boot.

Our favorite part is seeing the truck wearing eight large military non-directional tires and then swapping over to four huge by large fertilizer spreader tires to give it the look that would later come to define monster trucks.

Dane went from this Ford to a series of Awesome Kong trucks, one of which had an Allison airplane engine mounted in the bed for power. His stuff was always cutting edge and fast and Dane was a more than capable match for Bigfoot through most of the 1980s. Dane has long sense left the realm of monster trucks, but we hope he has this beast saved in a (big) corner of his shop somewhere.

KingSpeed Race And Repair Open House: Food And Friends Before The Races! Rough Start: This 1977 Ford Pinto Wagon Is Too Nice...How Did It Survive?!