Pulling Video: Art Arfons Vs The World Back In 1988 – USHRA Pulling Goodness 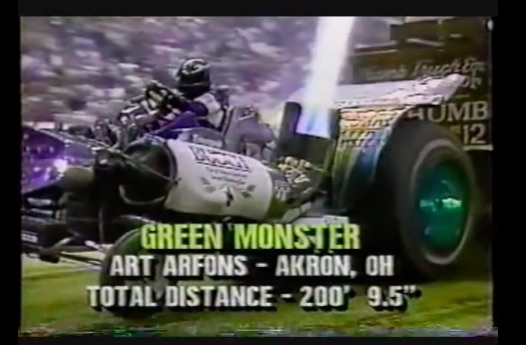 Here’s some cool footage from a 1988 broadcast of USHRA action from Richmond, Virginia. This clip concentrates on the pulling side of the event and specifically the modified tractors that were competing. We get a little sliver of the action but it does show off what made the USHRA shows so fun to watch in person when we were kids. The tractors we are going to see include one powered by an Allison airplane engine, one powered by three 572ci Arias hemi engines, and the indomitable Art Arfons on his Busch Beer sponsored, twin turbine engine powered rig. Shooting fire and with a drive sitting between the turbines, it was an awesome show.

Arfons is a BangShifty hero on about 50 different levels and we’re glad the announcers touch on his nature and accomplishments in the video. It is interesting to us that Arfons went from the peak speeds of his generation in motorsports to what is arguably one of the slowest (which does not mean it detracts from its coolness) motorsports in the world. He did awesomely well at both of them. Obviously his land speed exploits are the stuff of legend and in tractor pulling he was as innovative and successful as he was on the Bonneville Salt Flats.

4 thoughts on “Pulling Video: Art Arfons Vs The World Back In 1988 – USHRA Pulling Goodness”