Red Bull Frozen Rush 2014: We Go Rollin’ With Ricky Johnson In A Pro 2 Truck Through The Snow! Big Fun With The Legend Himself 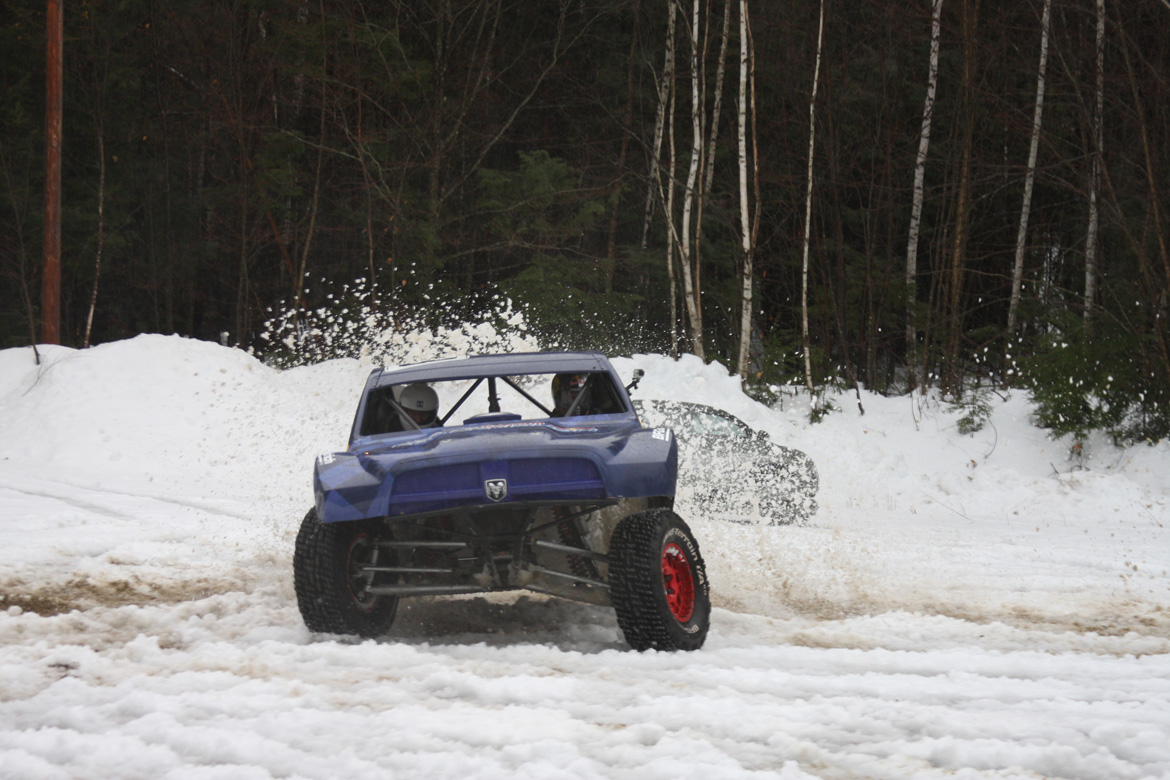 BangShift has afforded me a bunch of opportunities to do neat things with interesting people but I am not sure anything compared to ripping around in the snow with Ricky Johnson last week as a bit of a preview for Red Bull Frozen Rush 2014. If you are unfamiliar, Red Bull Frozen Rush is a unique off-road truck race contested on a wild course made of snow. This year the event will be run and the Sunday River Ski Resort in Maine. Last year, BangShift choked big time and failed to cover the event. This year we are not making the same mistake. 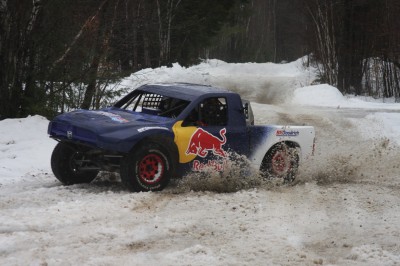 In order to get the best idea about what this madness was all about, Red Bull invited me and (my arch nemesis) Craig Fitzgerald up to Sunday River to take a ride in a Torc off road truck to get an idea of what the drivers will be dealing with on the mountain January 8-9 2014 when the racing actually happens. We rode in a Pro 2 class truck which is a different best than these guys will be driving but with 600hp, a ton of suspension travel, and a 408ci Ford stroker that sounded about as pissed off as you can imagine, it was one hell of a ride. During the actual event, the drivers will be in Pro 4 trucks which are 900hp four wheel drive machines that can tear at the snow and fly like few other wheeled vehicles on planet Earth. As it that wasn’t enough, the truck we were riding in was to be driven by Ricky Johnson the motorcross and off road racing legend.

I first learned of Ricky Johnson in the 1980s as a kid watching TV. He was one of the most dominant motocross riders ever and some of the singular races that he won are the stuff of legend. He racked up championships and retired from what was a hall of fame career on dirt bikes at the age of 26. His attention then turned to four wheeled vehicles and he’s competed in everything from stock cars to the Craftsman Truck series and of course short course off road trucks. Johnson founded the TORC series and has been one of the most stout competitors in it since the beginning. He’s won championships in trucks, too. To his credit are the 2010 Pro 2 series championship, in 2014 he won the Pro 4 title and on the same weekend he kicked everyone’s asses in the AMSOIL cup race which is like a battle royale with all the best Pro 2 and Pro 4 trucks thrown into the mix at once. Now I can tell you from personal experience sitting next to the guy that he can chuck one of these trucks around like you can’t imagine.

The area that we got to ride around in was a wooded and stepped dirt road with several openings for parking when the mountain is jammed full of skiers. While it was not the actual race course that Johnson and his cohorts will be competing on in a couple of weeks, it was a perfect place to experience the power of the trucks, the compliance of the suspension system, and the raw skill of Johnson as a driver. Equipped with BFG All Terrain T/A tires that had steel studs added to them, the traction was astonishing. When Johnson leveled the pedal of that truck onto the floor it dug in and went with the tires literally chewing at the ground beneath them. Since the fronts were also equipped with studs, the cornering was also bizarrely good on the wet and sloppy snow that we were rolling on. Johnson pitched the truck into some huge drifts, we spun donuts, and we 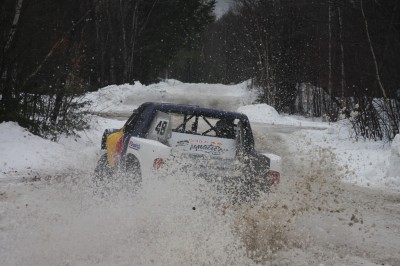 were doing it all with a blinding amount of rain and sleet flying through the open windshield area of the truck. Between the screaming motor, the sideways action, and simply being able to sit there and watch him drive the truck, this was an epic ride. I literally cannot imagine throwing another drive axle, 300hp, and huge jumps into the mix. There were a couple areas of the “course” we were on that allowed Johnson to get up a big head of steam and let the suspension of the truck work.

The amount of travel and the way the huge Fox shocks soaked everything up was unlike anything I have ever experienced. Both Craig and I were laughing like idiots and repeating phrases that would get a string of letters sent if I repeated them here. Be it my limited intelligence or my appreciation for what I just did, but I couldn’t help muttering a few “blue” words after the whole deal was done.

Perhaps the most fun part of the day actually came after the ride. Craig and I got to have lunch with Johnson at the ski lodge and we chatted him up for a couple of hours. As everyone well knows, sometimes these encounters leave you with a slightly rough taste in your mouth after learning a guy who you have followed for so many years is kind of a jerk. Such is the exact opposite in this case. Johnson is a true enthusiast of both cars and trucks. He regaled us with stories of Baja, training military Special Ops guys to drive off road, battles in both the trucks and during his motorcross days, and how the whole Frozen Rush concept came to be. He’s not a “big timer” or someone who only wants to hear himself speak. In short, Johnson is a guy who would be a total riot to have a couple of beers with. To us, it is awesome to learn that a guy who has been in the world of competitive motorsports for so long is still as “into it” as he was back in the day as a young man. Johnson was the founder and creator of the TORC series and many people do no know that. It takes a special kind of determination to found a racing series and actually make a success out of it.

I’m a know-nothing about dirt bikes but Fitzgerald and Johnson were chatting about two wheeled terrors like they had known each other for decades. Frankly I was surprised that Johnson didn’t start whipping nachos at Craig’s face like I wanted to, but he’s obviously a man of better moral character than me. I’m joking of course. Fitzgerald and I had the time of our lives and are even more wound up about covering the actual race January 8-9 at Sunday River. We’re going to be back with more information tomorrow on the course and the specifics of the event. It is going to be all time and you’ll be able to watch the live stream right here at BangShift! 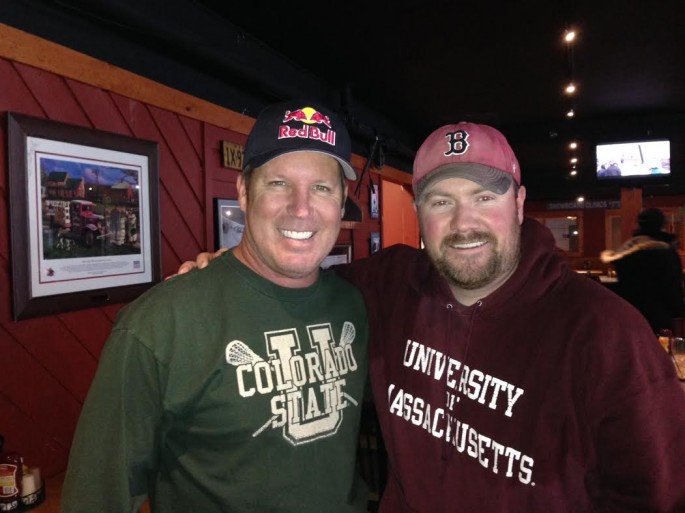 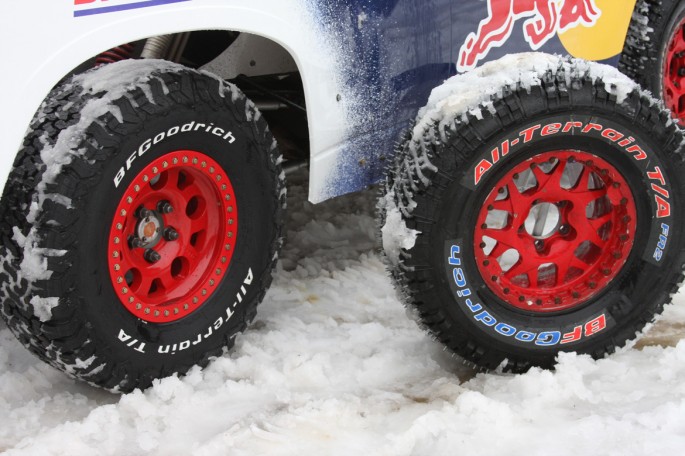 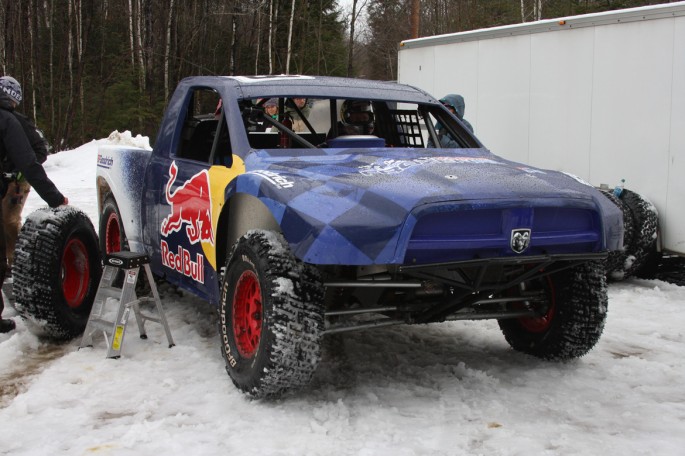 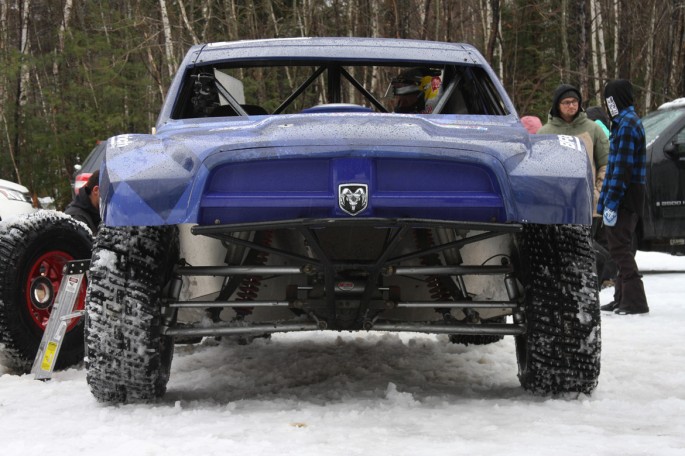 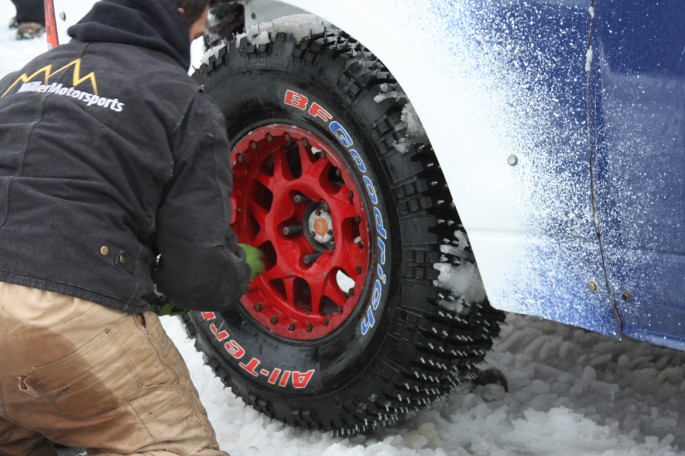 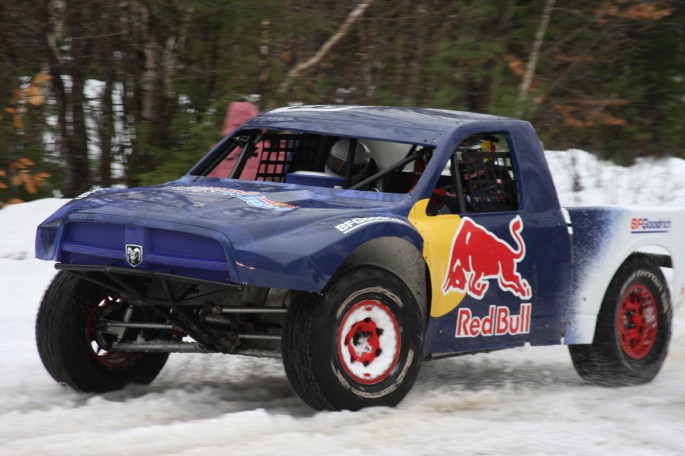 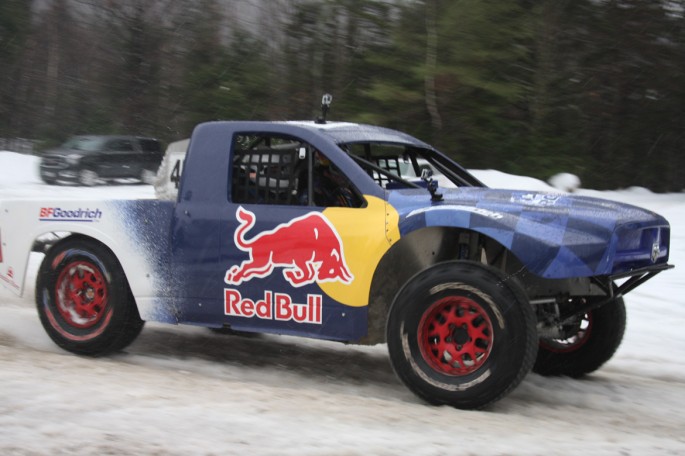 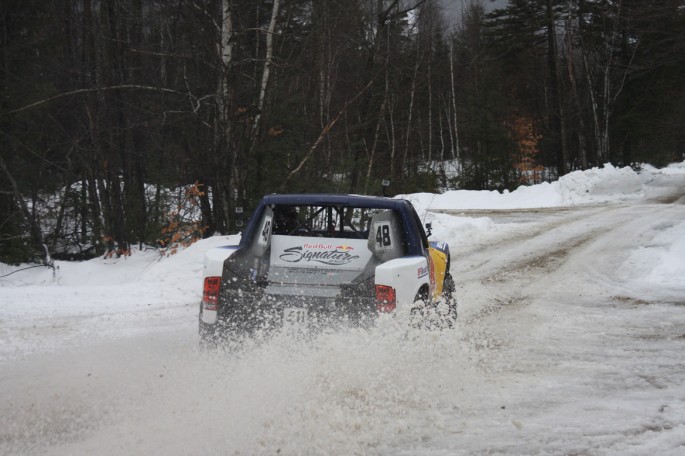 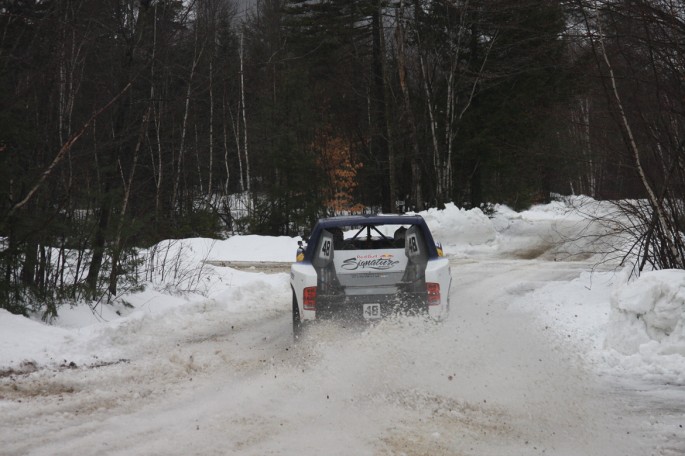 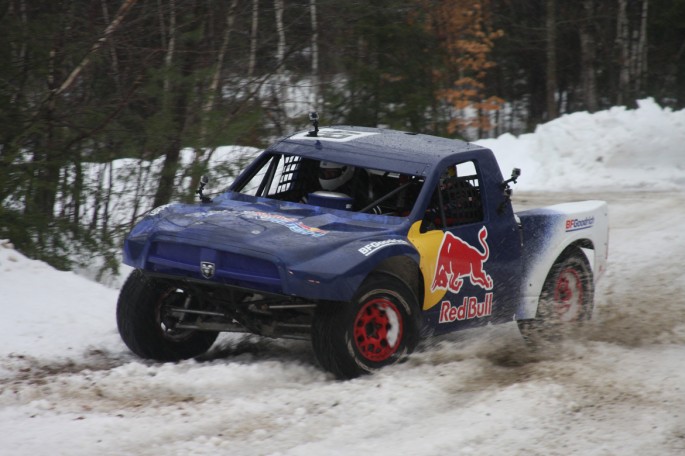 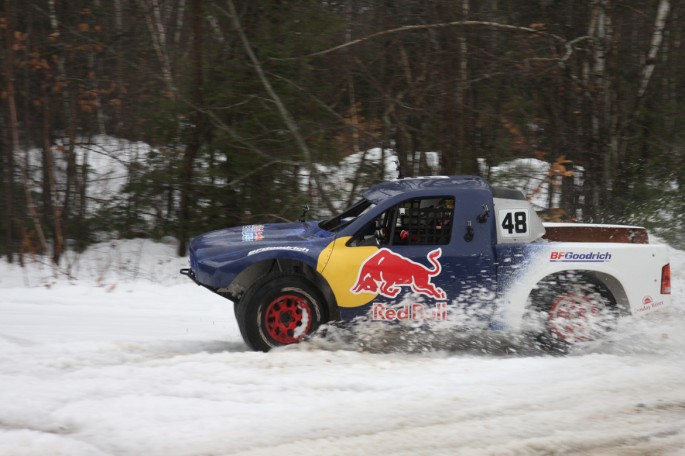 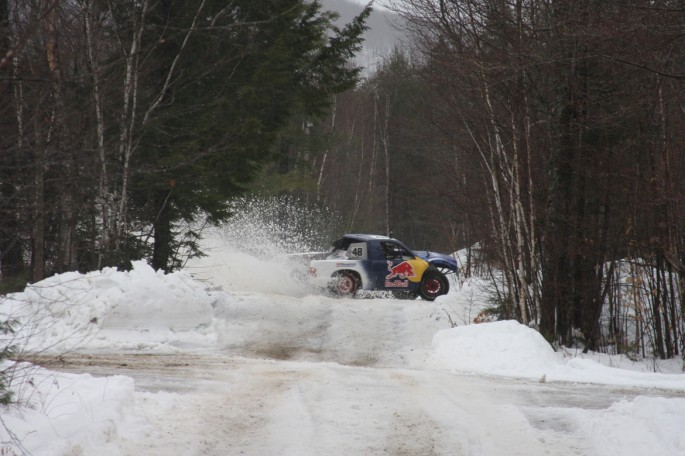 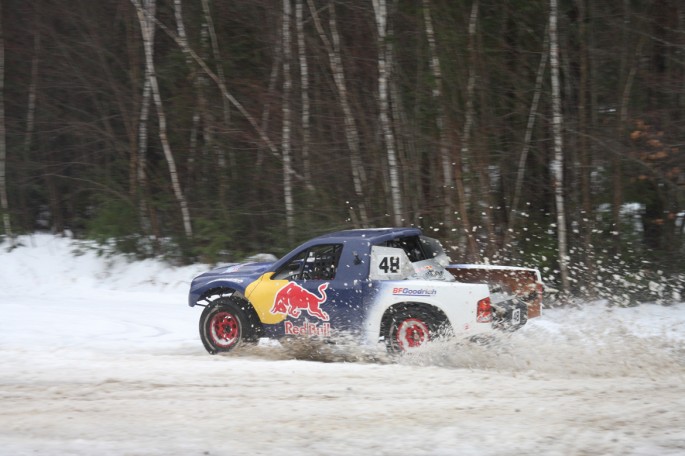 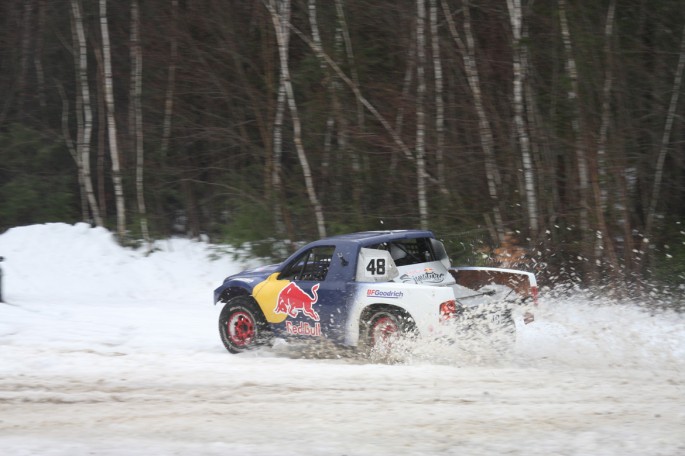 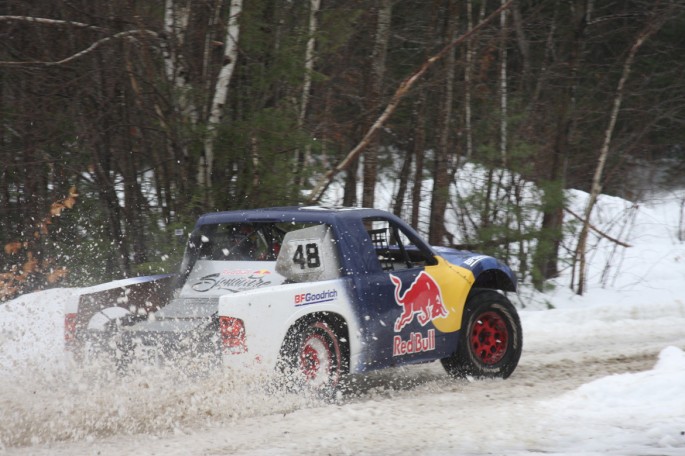 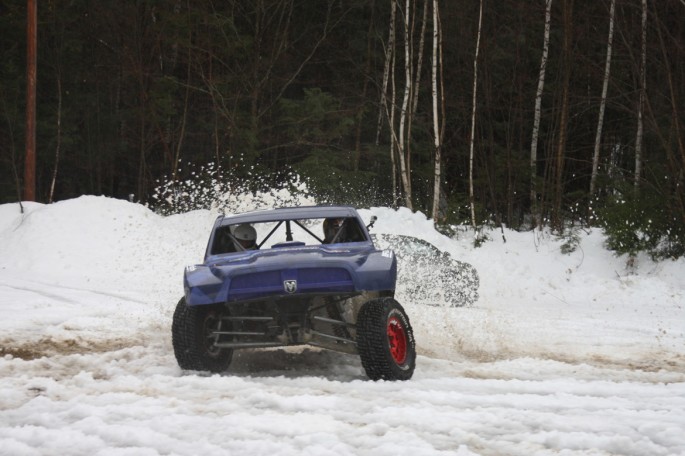 5 thoughts on “Red Bull Frozen Rush 2014: We Go Rollin’ With Ricky Johnson In A Pro 2 Truck Through The Snow! Big Fun With The Legend Himself”