The Roto-Wing Plow Was A Man-Eating Snow Mover From The 1930s – What Happened To It?!

Aug 21, 2019Brian LohnesBangShift XL, XL VideosComments Off on The Roto-Wing Plow Was A Man-Eating Snow Mover From The 1930s – What Happened To It?! 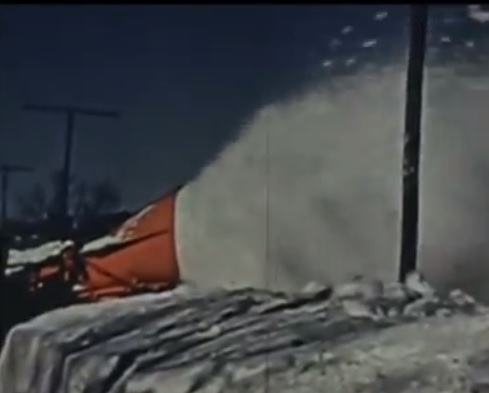 As I write this I am nowhere near snow. I’m at the San Francisco airport and it is warm out yet I am still thinking about the white stuff. The invention you will see in action below, called the Roto-Wing plow is pretty awesome. In fact, it seems like something that should be in use today but we’e never seen one. The major problem is that the Roto-Wing seems to have been lost to history. This unit is genius level, especially in a situation like you see here because it is designed to lop off the tops of the snow banks and heave that snow halfway to China. Yes, if used in a residential neighborhood it would probably blow out every window on the street, but to make an omelet you need to break a few eggs, right?

I’m not sure how this thing worked specifically but in simple terms this was a wing plow on the side of a truck designed to funnel the snow back from the tops of the snowbanks with a twist. At the top of the plow there was a rotary snow blower which blew the snow back a long way and cleared the area for more snow to be shoved there if need be. Streets here are not being plowed with heavy equipment, road graders, and that type of stuff. They can only stack the white junk so high. With the Roto-Wing, all that changes. I’m guessing this was operated off of the truck’s PTO somehow, but that is a guess.

The only question I have at this point is what happened to this thing? It seems too good to be shelved and never seen again. Granted under normal circumstance it wouldn’t be that necessary but when you get to Defcon level one snow like we have some winters it would be a game changer. This is a quick video showing the Roto-Wing in action circa 1939. We need this sucker back!