Safety on the job site is no laughing matter. Well, maybe a little – Shake Hands With Danger Scores High On Unintentional Comedy (Video) 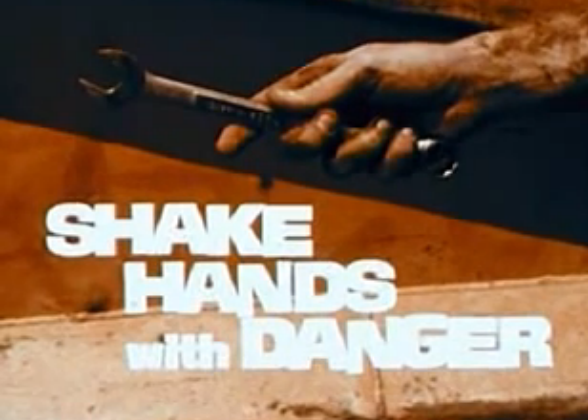 (Words by Greg Rourke) – Shake Hands With Danger is an industrial safety film produced in 1980. It was directed by Herk Harvey, best known as the director of “Carnival Of Souls”, a horror flick apparently produced with change found in the couch cushions.

It looks like Herk’s agent called him as he was leaving a Three Stooges film festival and said “Herk baby, we have a project for you”. We have actors with disco style hair and porn style ‘staches taking all sorts of short cuts while attempting repairs on big yellow iron. Ominous music plays, letting us know yet another disaster is about to happen. Lyrics include “I used to laugh at safety, now they call me Three Finger Joe”. Resulting disasters include a destroyed mid 60’s Ford service truck, a brake chamber shot through a pickup, and an excavator pushing a small dozer down a hill while chase style banjo music plays.
Narration was provided by Charles Oldfather, who was a professor at the University of Kansas School Of Law. He may have left this gem off of his resume.

Lets all be careful around the construction site. And be real, REAL careful when changing loader buckets.

2014 Winternationals Gallery: People and Pits Photos From The 2014 NHRA Winternationals Video Of Corvette Museum Sinkhole Released - Helicopter Drone Footage From Inside The Hole!

3 thoughts on “Safety on the job site is no laughing matter. Well, maybe a little – Shake Hands With Danger Scores High On Unintentional Comedy (Video)”