SNAP: When An Oil Rig Anchor Chain Snaps No One Is Safe

Jul 22, 2019Brian LohnesBangShift XL, XL VideosComments Off on SNAP: When An Oil Rig Anchor Chain Snaps No One Is Safe 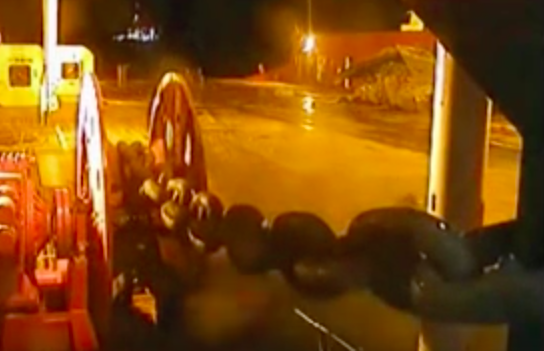 Spending the majority of your time on the ocean is incredibly dangerous and not just because of the drowning risk. Typically large vessels, oil rigs, and other overgrown bath tub toys have systems and parts of them that can kill you in a heart beat if you are not paying attention. That’s the case in this video where a beyond monster-huge anchor chain on an oil rig snaps without warning and nearly kills a guy.

Weighing tens of tons on their own, the chains that lower the anchors into the ocean seem like fairly docile, gentle things but the reality is that their huge size tends to belie the fact that there’s humongous stresses being exerted on them from both ends can lead to the occasional disaster like we see here.

Basically you will see a guy on the dock walk out of the frame and everything looks OK. He then walks off the frame and that is when the chain snaps. If you watch the bottom of your screen you’ll see him make a break for it. After the whole thing is over, he reemerges and seems kind of dazed. The video end with him surround by co workers and sitting on deck.

Think that anchor is still down there?

Press play below and watch this monster chain try to kill an innocent guy – Crazy!

BangShift Question Of The Day: What Was Your Favorite Factory Mule Tester? Mark Williams Leads The Way In Drag Racing Driveshaft Technology, Safety, and Engineering