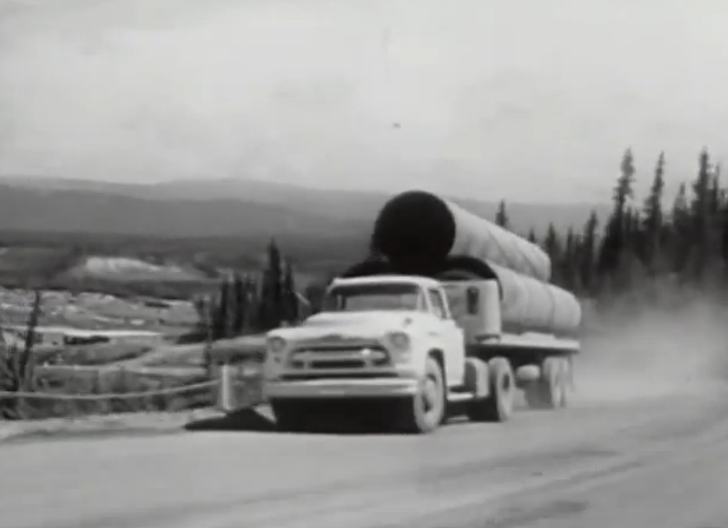 Some videos are just timelessly cool, like this one. The nearly four minute promotional video for the 1957 Chevy truck lineup is great on all levels. From the trucks that are showcased to the booming voice of the announcer, the catchy song that is backing the whole thing and the scenery shown as this convoy of classic iron makes the “Alcan Run” in record time. The team of trucks that ran up to Alaska included a Cameo, a one ton panel truck, a dump truck, and a pair of tractor trailers. One of the tractor trailers was equipped with an automatic transmission as a demonstration of that component’s durability.

Finnegan and Freiburger made this same run in their Ranchero during the Alaksa adventure Roadkill episode so it is neat to see what it looked like 60 years ago. The scenery has not changed much but we have to guess that the few amenities that the Roadkill boys experienced along the way weren’t on the Alcan at the time this video was made. The claim at the end is that the trucks make it in about 45 hours, which had to have been grueling in the relatively spartan confines of trucks in the 1950s, especially the rigs. The one ton panel truck was probably like driving a base drum for much of the trip on the unpaved road. The guys in that truck may have had it the worst of the bunch! The entire thing is spoken and sung in rhyme which if done today would be disasterous, but when done in the late ’50s is period freaking correct!

While today’s ads like to show trucks doing all kinds of crazy stunts, real world accomplishments like this stuff are more in tune with our interests. Who wants to find an old 1950s Chevy big rig and recreate the trip? It would be a butt kicker but we want in!

Oh, and you’ll totally be humming the line, “CHEVROLET! Champs of the Alcan Run!” by the time you are done watching this.

PRESS PLAY BELOW TO SEE AN AWESOME 1957 CHEVY FILM FEATURING THEIR TRUCKS MAKING THE ALCAN RUN!
How Did The Corvette Morph Into A Mid-Engined Layout? Regular Car Reviews Takes On The Story In-Car Video: Watch What Happens When A Tire Fails At 235Mph - Truly Insane Video!