Awesome Historical Video: The Industrial Use Of Caterpillar Tractors – Mechanical Awesome From 1926 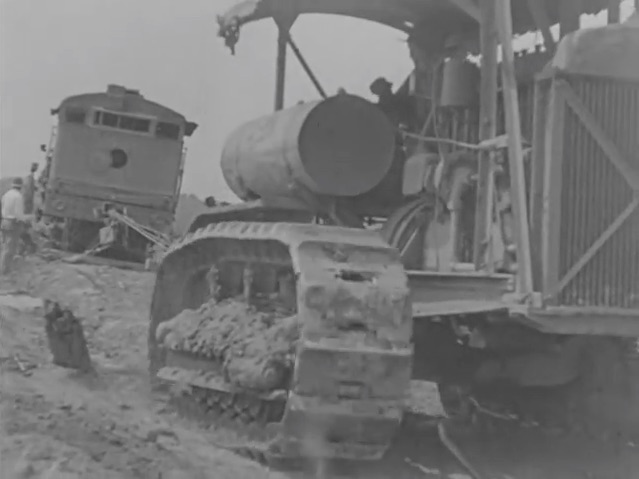 Well this is perhaps one of the coolest things I have ever found on YouTube. You are about to watch a silent film (not apologizing for the lack of sound) called The Industrial Use of Caterpillar Tractors which was made in 1926. The 10-minute film shows crawler tractors doing an amazing array of work during an era when the world was purely mechanical. No digital stuff, no electronics, no finesse, just brute strength to get the job done by any means necessary. From cleaning out the stockyards to hauling small trains, pulling down buildings, running telephone lines, and manicuring golf courses.

One of the most interesting things is the salt mining operation that is shown. The entire thing is run off of the tractor and it looks to me like the are mining on the Bonneville Salt Flats.

If this video had sound it would be squeaking, clanking, and rumbling noise. The kind of noise that these old machines made. They were loud and dangerous and unforgiving. Few of them had a roof over the operator’s head. All of the controls were manual and despite the fact one guy is dressed in a sweater, collared shirt, tie, and cap, the men who ran these things left work each day sore and half-deaf.

The Caterpillar 30 and 60 tractors shown were really revolutionary in so many ways and the company was very good and illustrating just how they changed the world. They were maneuverable and strong. They could outwork the wheeled tractors of the day in so many different ways it was crazy. It did not take long for other manufacturers to get in on the game but as we all know, Caterpillar’s strong start led it to become one of the world’s great industrial empires.

In short, this is a window into world that is rarely seen. The true face of work about 90 years ago.

Check This Out: A Visual Timeline Of The Build Of This Mustang/Integra Mashup! Respect Your Elders: Watch This 1927 Bugatti Type 35B Absolutely Scream At Goodwood 2017!

One thought on “Awesome Historical Video: The Industrial Use Of Caterpillar Tractors – Mechanical Awesome From 1926”