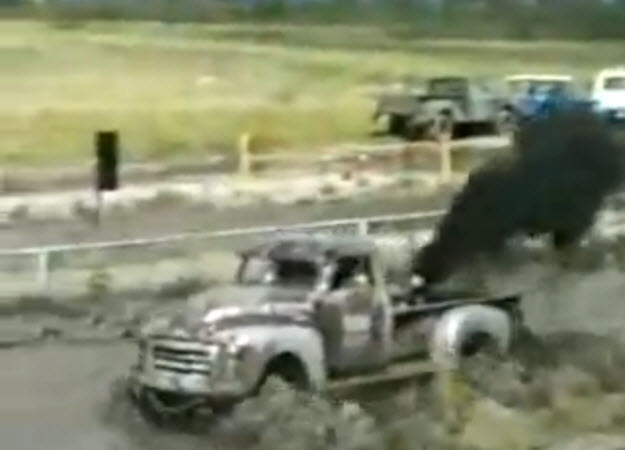 Back when I was in high school in 1985, I loaded up a couple of my pals at 5:30 one Saturday morning and headed north to just outside the state capitol of New Hampshire. In a small town called Bow, we stood behind the iron-clad safety of 300 yards of snow fence at the Breakaway Truck Stop and watched a never-ending procession of trucks battle it out against New Hampshire mud the consistency of concrete. I had a flashback to that event when I watched this video from 1986, of a mud bog event at Tail Creek Raceway in the wilds of Lacombe County, Alberta, Canada.

This is two and a half minutes of wheel-turnin’, mud-flingin’ fun. The only difference between this and my sojourn to Bow, New Hampshire is that these guys seem to be experienced enough at this to be able to get through the mud without an old Trojan front loader to haul them out by cable.

The best occurs at about 1:38 with a late 1940s Chevy pickup fitted with Satan’s own diesel, rolling coal and putting forth a jet-black column of diesel smoke that’s probably still floating in the atmosphere over Alix, Alberta.

Tail Creek Raceway is still running these same kind of events, only now it looks like they’ve got actual guardrails in a nod to attendee safety. It plays host to the Tail Creek Music and Mud Festival the last weekend in June, 2014, a full weekend of music, camping and mud action. Check out the video from last year’s event, too.

$150 Off From Ridetech For Your USCA Texas Race Entry This Weekend! RacingJunk Find: The Meanest, Coolest, And Most BangShift Approved Mustang II We've Ever Seen