Wandering Colossus: This Former Big Foot Truck Went From Major Movie Stardom To The Corner Of A Florida Midway- How? 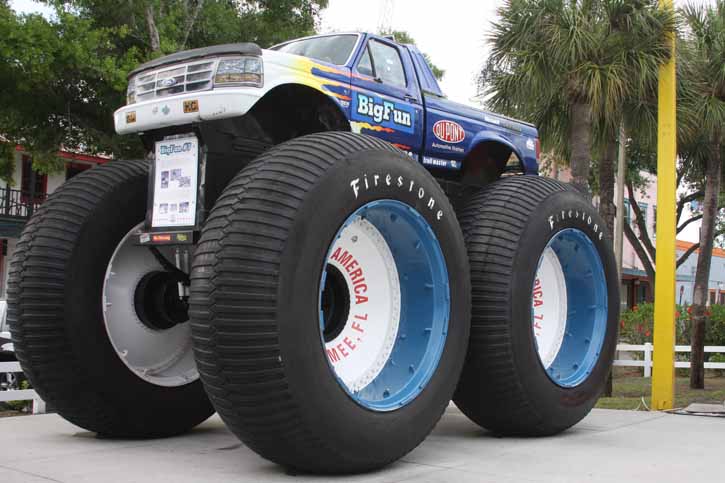 In today’s world few people likely remember the story of legendary boxer Joe Louis. The man had an incredible career that literally made him an American hero at its peak. Like many boxers he made mammoth sums of money during his time as a fighter and even after earning over $5-million bucks during the 1940s and  early 50s he was virtually broke and owed the government lots of back tax money. He came out of retirement for a couple of bouts, lost them both, and ended up working as a greeter at a Las Vegas hotel for several years before his health degenerated further and he lived out the rest of his years out of the public eye. A sad end to a meteoric career. I bring up this odd story because the truck you see above and below is the mechanical equivalent of Joe Louis. How so? I’m going to tell you.

Despite the words “Big Fun” being scrawled across the doors, this is actually Bigfoot 7, a truck that was built to be a star, literally. Bigfoot 7 was constructed to make an appearance in the now cult classic movie Roadhouse. During one of the craziest scenes in the movie the truck would be driven through a Ford dealership show room, crushing everything in its path much to the distress of the guy that owned the place. Here’s the scene:

Note that it was wearing the standard issue monster truck 66″ tires there. It would wear those tires on international tours of countries like Australia and New Zealand during the 1990s as well. The truck appeared again on the big screen in the movie Tango and Cash. We cannot find that scene on YouTube which is kind of shocking because EVERY other scene from that garbage movie can be found there. Odd to say the least. Anyway, Bigfoot 7 was a bona fide star both home and abroad with film credits and lots of time traveling the oceans as well. It was during this time in the 1990s when truck chassis started getting more advanced as did suspension systems and construction techniques as well. The monster truck racing world really kicked it into high gear during the early 2000s and it was at that time when Bigfoot 7 began its descent into sideshow hell.

In the mid 2000s the truck was upfitted with the monster 10′ tall tundra train tires that it wears now and sold to the owner of a Florida restaurant called Race Rock. This was a theme place that took the Hard Rock Cafe idea and applied it to racing. The massive truck lived in the parking lot right beside RT 95 in Orlando, Florida. For years it sat there drawing attention to the restaurant (which had an entry way with the Sampson monster truck hanging over it and a bar that had an actual Indy car rotating upside down over the bar tenders and drinks). It was something I got to see in person while on a family vacation and I even went full tourist and climbed into the tire for a photo op. This would have been in the 2004 range or so if I had to guess.

Anyway, Race Rock went out of business and the truck, like everything else sat there for a while before being snapped up by a place called Fun Spot USA which is located on International Drive in Kissimmee, Florida. To describe International Drive in words is virtually impossible. If it needed to be described in a sound, it would be the Earth farting out every chain eatery, hotel, t-shirt shop, weirdo roadside attraction (The Titanic Experience!), crummy bar, and “adult novelties” emporium ever conceived in one 10 mile stretch. It is glorious and horrible all at once. Naturally, I wanted to see it after not having had a look in 20 years and I wanted my kids to see it as well because I am a bad parent.

My intention was to check out a cruise night at a place called Old Town but since there was a threat of rain and everyone in Florida has cars which are water soluble, no one showed up. Because no one showed and my son had to take a leak we walked over to this Fun Spot joint, turned the corner and there was the truck!

The rims had been painted at some point in the last 10 years but the rest of the thing is in pretty tough shape. The awesome 10′ tall tires are cracked and looking bad, the paint on the thing is a disaster, the display signs have replaced all references to Bigfoot with the word Bigfeet, and the whole truck just seems to have a single tear running down its cheek, crying for freedom or death, whichever could be achieved quickest and with the least amount of pain. Hey, those ancient tires are still holding air, though!

On the positive side, my kids loved the huge truck because they had seen videos of the other Bigfoot examples with the tundra tires running mud pits and crushing other monster trucks from my sweet 80s collection of tapes. They like I, climbed into the rim for the photo you will see below. My oldest son Tom said, “Dad, the words ‘no climbing’ are written right here.” I let him know that I’d gladly split their bail if the Fun Spot gestapo came and dragged us away. Thankfully it did not happen and I was not forced to make another prisoner my bitch that night.

While there are clearly massive Rockwell axles under the truck, I do not think there is an engine in it. Bigfoot 7 is still impressive to be around and I was happy to see it again. Before we left I gave it a pat on one of those massive Firestone tires because chances are by the time I come looking for it in the future, it’ll likely be lost to history forever.

Scroll down for photos of Bigfoot 7 As It Sits Today At Fun Spot On International Dr.  – 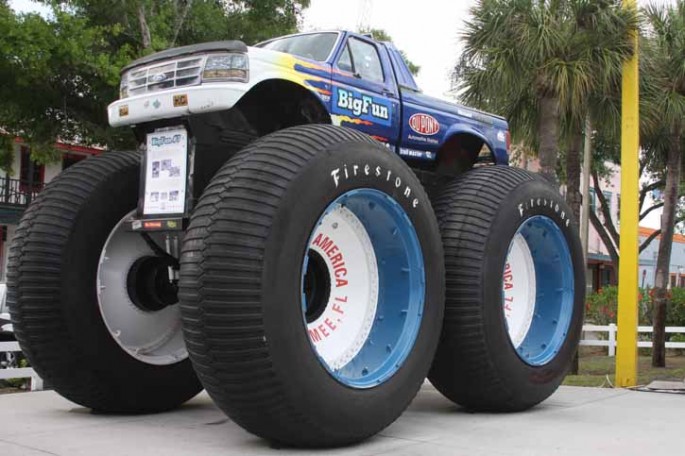 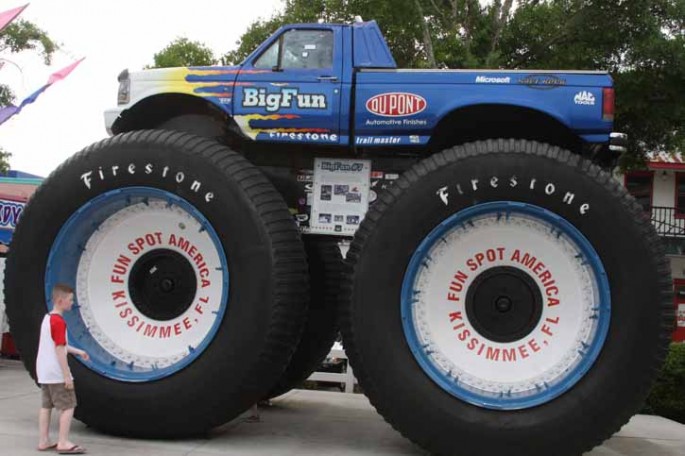 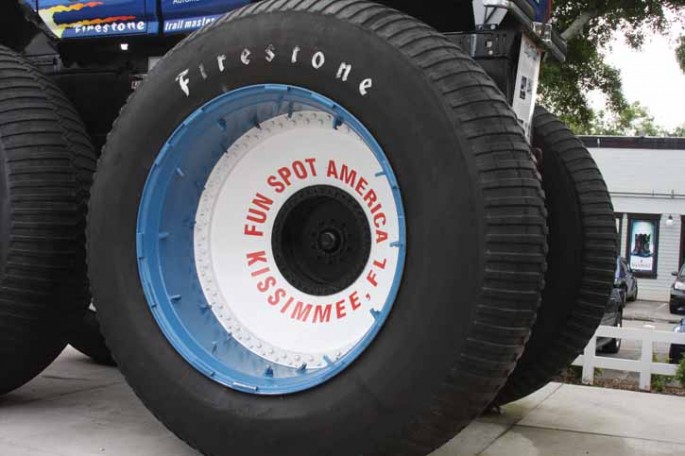 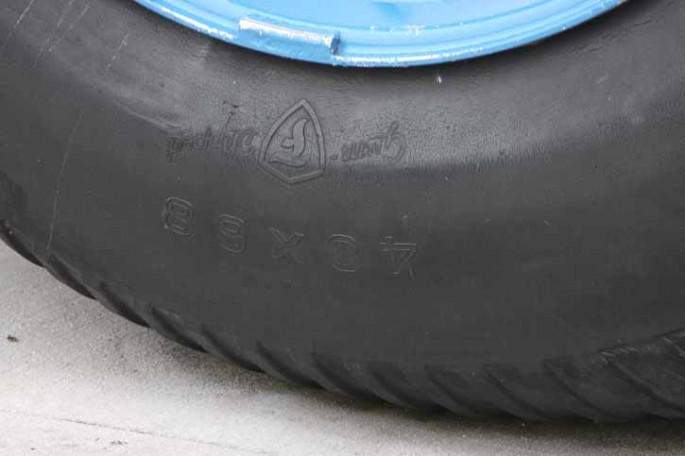 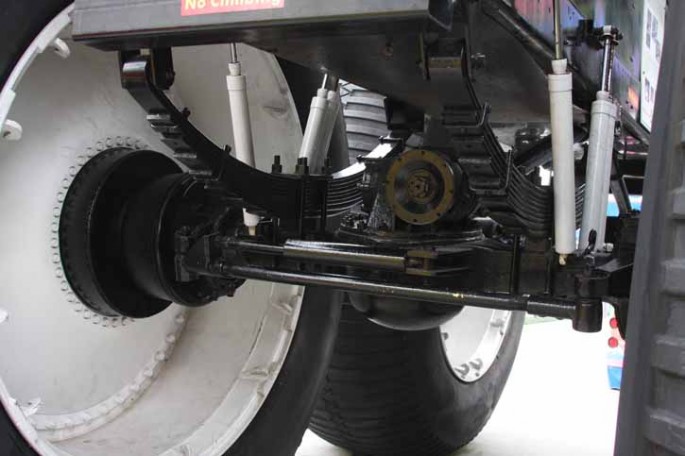 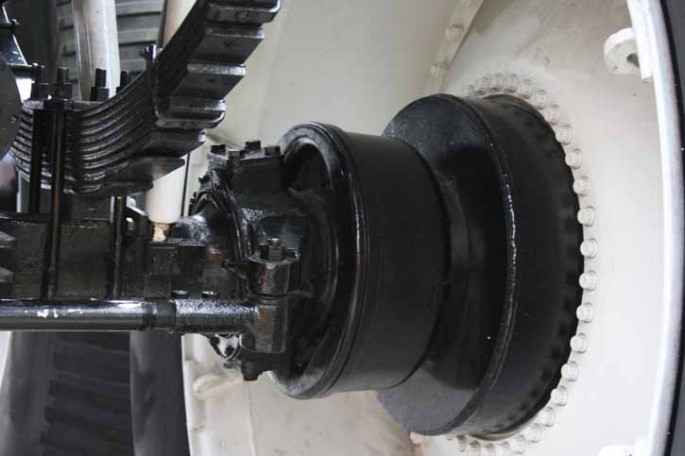 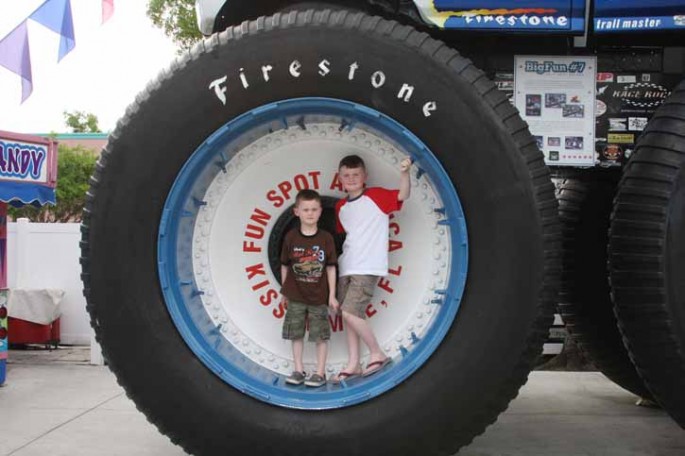 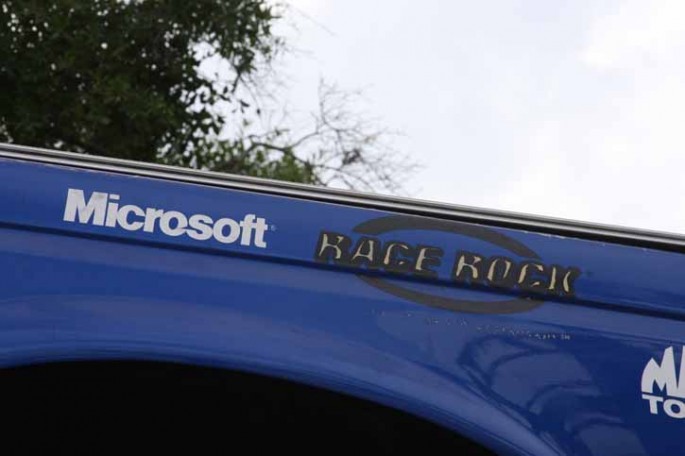 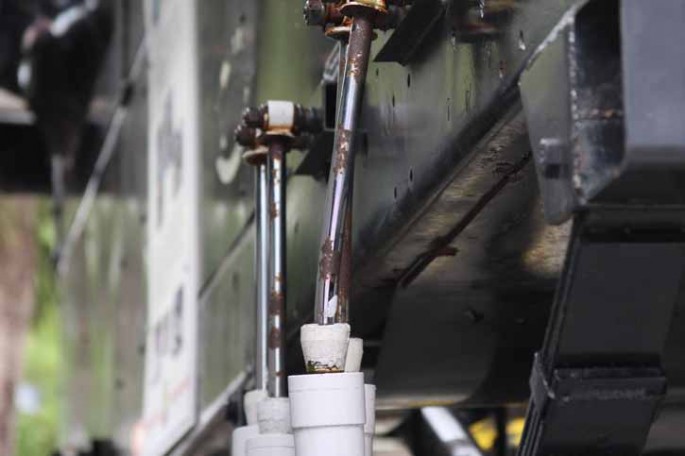 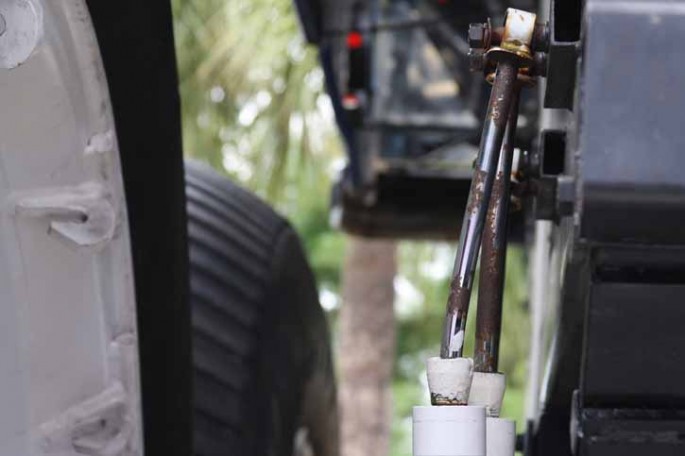 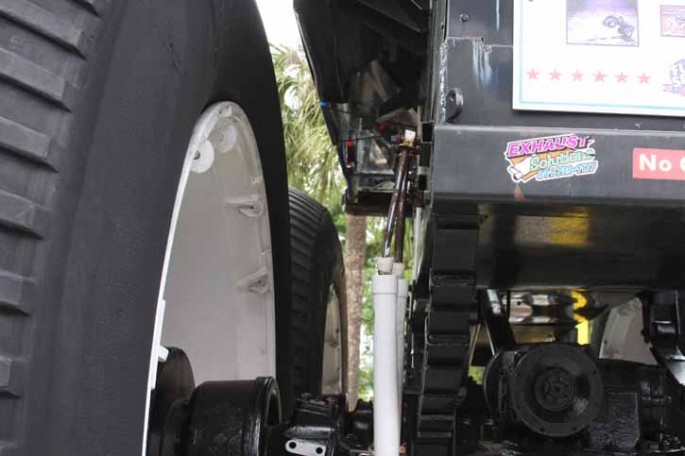 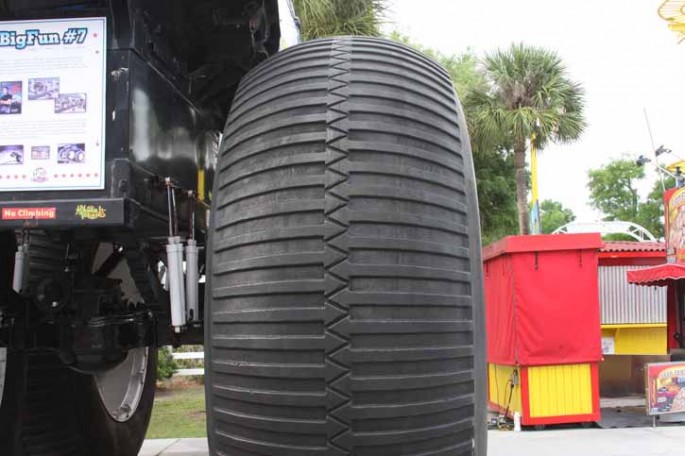 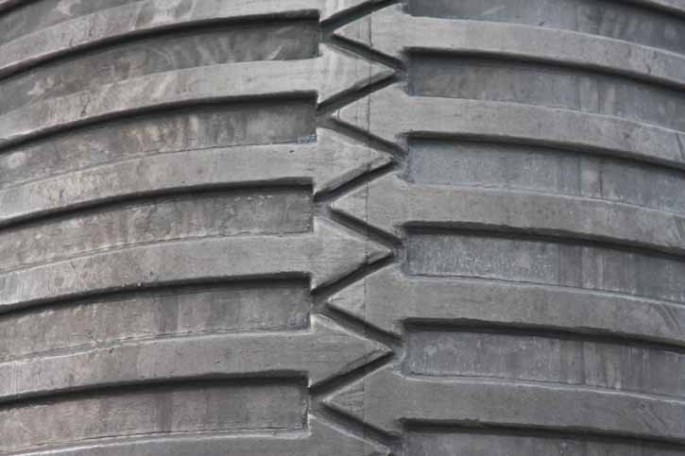 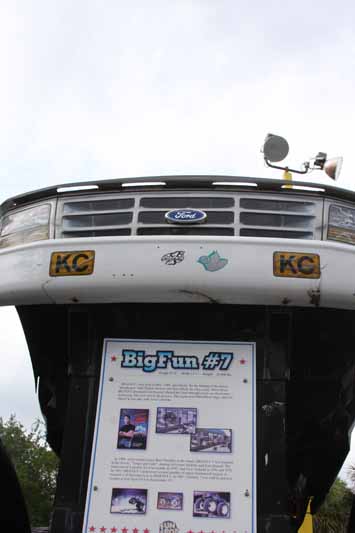 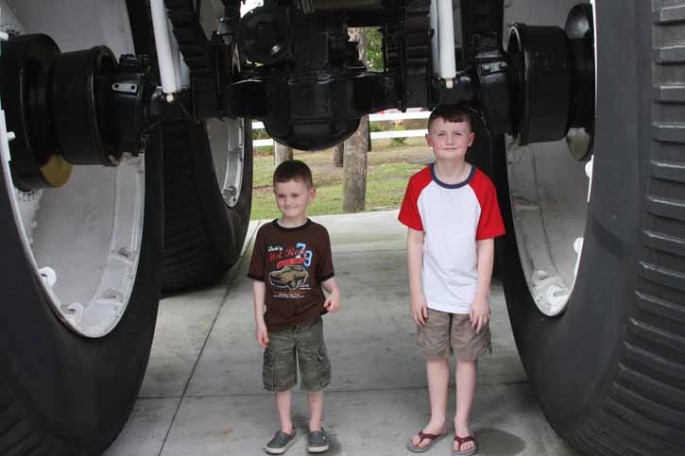 13 thoughts on “Wandering Colossus: This Former Big Foot Truck Went From Major Movie Stardom To The Corner Of A Florida Midway- How?”