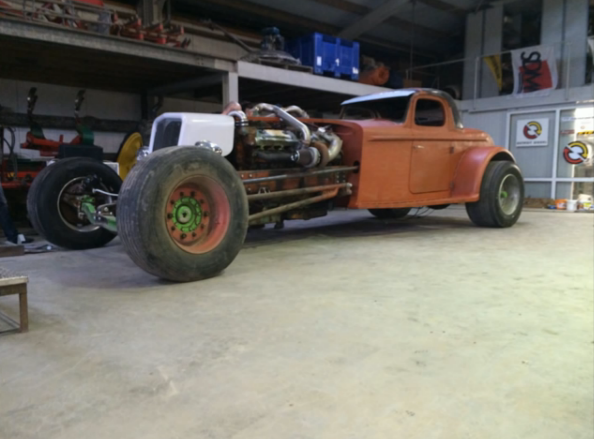 Somewhere in the world, right now, at this very second, there is a 16V92 Detroit Diesel hot rod being built and there is video proof that the big machine actually runs and makes incredible noise below. From the looks of the guy who is building/having this machine built he’s a total dieselholic. He has a Chevy Nova with a 6.5 diesel in it, at least one pulling truck with an oil burner making the power, and many of his videos are of trucks and tractors all powered by smoke belchin’ diesels. He seems to be located in Europe going off of the locations of the pulls he has attended. There are a couple videos made in Canada as well so we’re taking a shot there.

The whole “insane humongous diesel hot rod” thing has been going on for a while now and as you know, we’re fans. When you hear what this 16V92 Detroit sounds like when it is fired up (with an air starter), you’ll be on board as well. Before settling into a normal idle the truck has an absolutely wicked lope. Between the sound of the air starter and the sound of the engine, this is very cool stuff.

You can see the body on the car and the front grill and how it all ties together. Once painted and finished, the machine should be a looker, especially with the giant Detroit Diesel engine being the centerpiece of the operation. In case you were wondering, the car should absolutely haul ass. With the turbos, we’re estimating horsepower to be in the 800-1,000 range and torque is estimated to be some absolutely off the charts stupid huge number. Braking should be pretty epic as well with all the weight of the big rig body gone and all the big stoppers still intact.

These big cars aren’t for everyone but they sure are for us! We’re going to keep an eye on this monster to see it come together and pay attention to how they finish things like the wheels, how they paint it, and what the interior is going to be like. We want to drive it!

This Is How A Four-Cylinder Should Sound: The Lancia 037 - Screaming Supercharged Violence Another One Bites The Dust: Nissan's Xterra Ends Production After 2015