This Is How A Four-Cylinder Should Sound: The Lancia 037 – Screaming Supercharged Violence 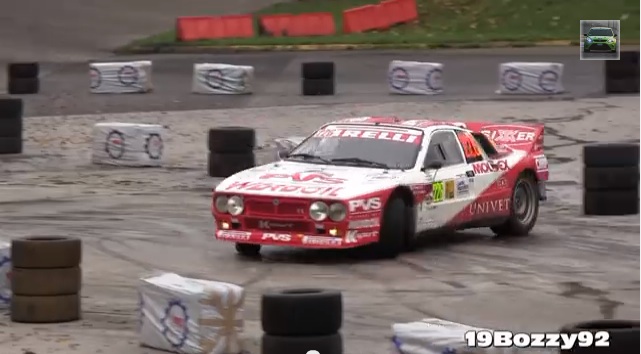 We aren’t exactly kind to four-bangers around here, and you can blame a lot of that on the “fast and furious” crowd that made every Honda Civic sound like an armada of Asian Giant Hornets for years with exhausts that looked better suited for potato guns. Sure, there are some stout pieces out there…the older Ford 2.3L, Chrysler’s 2.2 Turbo  and Pontiac’s Iron Duke four come to mind for most people. But if you want a seriously pissed-off four-cylinder that makes a noise that can only be classified as “glorious”, look to Lancia. While the company is now a punchline in the FCA group, in the 1970s and 1980s Lancias were something to be feared in rally racing, mainly because the company was insane enough to try anything to work the already liberal rules over. The Stratos was the first, using a Ferrari-designeed V6 and a wedge body, and it was a stormer. The Delta S4 and Integrale took the Group B rulebook and ran it to it’s ragged edge. But the one that really shines is the 037, the last RWD World Rally champ. Just listen to it…at idle the 037 sounds like a weed-whacker with Explosive Anger Disorder, and at full throttle the supercharger doesn’t whine, it screams and forces the four-banger to move the car in a way that makes you think there’s much more than the 255-325hp they normally produced. The only shame in the 037, besides so few existing, is that there is no physical way I fit inside the car. I’ve tried.

Look Out Below! Boston Driver Launches His Toyota Tacoma Off Of Interstate 93 Watch This 16V92 Detroit Diesel Powered Hot Rod Fire Up - One Huge Coupe

7 thoughts on “This Is How A Four-Cylinder Should Sound: The Lancia 037 – Screaming Supercharged Violence”