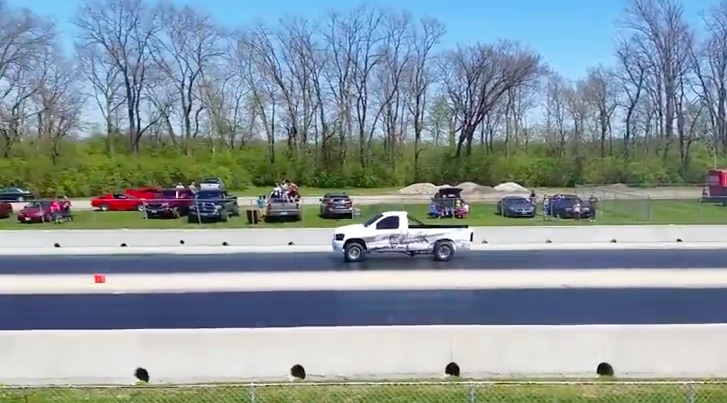 If you are someone who pays attention to the world of diesel performance, you know the name Lavon Miller. His company, Firepunk Diesel which is located in Ohio is one of the leading builders of high performance transmissions and crazy high horsepower diesel trucks in the country. His own trucks are on the true bleeding edge of diesel performance. He’s won the Diesel Power Challenge multiple times and he has a new truck that is competing in what could be the craziest diesel truck event of all time in Utah, the Ultimate Call Out Challenge.

This event has brought together more than 20 trucks and they are some of the toughest in the country. Lavon’s newest creation is there and he is fairing well so far. The truck is a “lightweight” 4,500lb Dodge with a deck plate equipped version of the 6.7L Cummins inline six engine. His previous truck known as the “Enforcer” was the vehicle that defeated all comers (going away) twice in a row at the Diesel Power Challenge in Colorado.

In the video below you are going to see Miller testing the truck at Kil-Kare Dragway in Ohio. The monster runs a blistering 8.27/166mph shot and really shows its teeth. The trap speed is pretty incredible to us, especially for a full-sized truck. During the event in Utah it is not a heads up race but rather time trials with the low elapsed time winning that portion of the deal.

As we write this, Lavon had put down over 2,200hp at the wheels during the dyno portion of the event. Will the light weight hurt him on the pulling course? We’re waiting to find out. It certainly does not hurt him on the drag strip because this thing is a missile.

Now…what do you think it would run at the Ohio Mile?

eBay Find: It's Rusting, Neglected, And Needs A Lot Of Work, But This 1958 Plymouth Fury Can Be Something... Ford And The National Inventors Hall Of Fame Museum Have Partnered To Display This Combination 1965/2015 Ford Mustang!