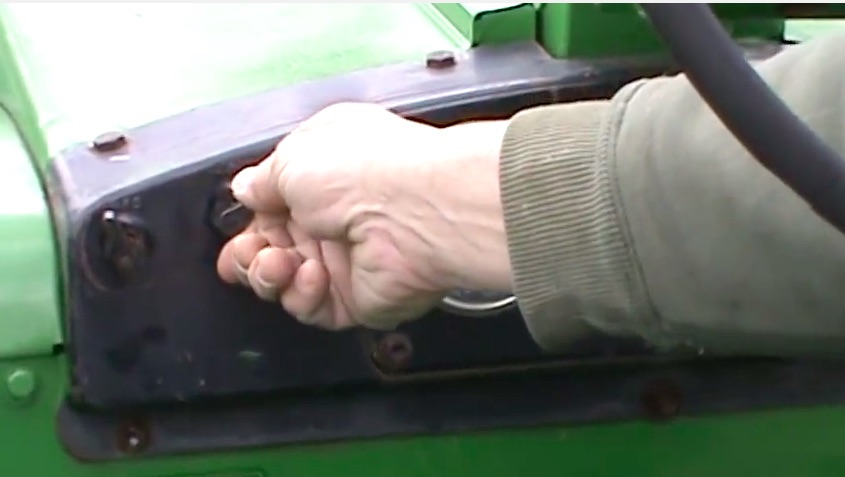 If there is a basic rule of life it is that any engine that needs or happily uses another engine to start it is pretty awesome and the big (400+ ci) two cylinder John Deere diesel is nothing but awesome. This engine lived for MANY years and was produced in mass quantity providing the power for many American famers to cultivate the land, plant their crops and harvest them as well. The L-head “Johnny Popper” is a great piece of American gearhead history. The tractor in this video is a 1958 John Deere 820 and its 75hp diesel was plenty hot enough to help is drag plows and run implements as well. Starting the thing was a pretty well orchestrated procedure that involved firing up a small displacement four cylinder gas engine to get the big diesel turning over.

As you will see you really have two procedures in one. Getting the gasser running is one job and once that is handled there is a whole different set of instructions for getting the diesel turning over and lit off. Using the levers to hang engage the clutch and get the engine turning as well as hanging the valves open so that there is no compression and that the oil pressure can build. Once the oil pressure comes to life he slams the compression lever closed and the engine comes rumbling to life. At that point he kills the pony and lets the big diesel make its famed noise.

The thing that we find most entertaining about this is the fact that machines, cars, and everything else has been dumbed down into nearly “one button” operation today. We’re thinking that the average BangShifter could figure out how to crank this thing off after some trying but the average “man on the street” would be at it for hours before giving up and breaking something. Can you imagine the talk that the sales guy had to give the buyer of this thing on how to start it? 1958 means that virtually everyone buying one of these had already owned some sort of tractor perviously. Remember, if they had been working their stuff for 20 years they were upgrading from a 1930s model so this baby might as well have been a spaceship in many ways.

While it is not “bad” we can just hit the key and drive off these days, there’s something totally freaking awesome about this whole program, right?