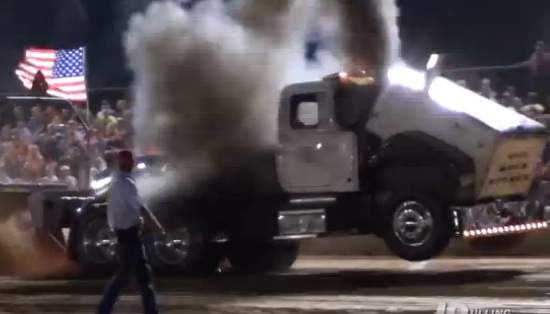 We’ve showed you lots of videos of pulling trucks and tractors suffering big time engine failures while trying to drag the mighty sled down course. This is one of the first videos we’ll show you that illustrates what happens when a failure in the driveline itself rears its ugly head. Spoiler alert…violence. The truck that you’ll see in this video is the “Big Mack Attack” which is driven by Shane Canterbury. The footage was taken at an Ohio event in August. Like in all of these videos, things start out pretty good and then without warning the worm turns.

This time the engine isn’t the blown up piece but it is the responsible for the failure because of the insane amount of power the mill is creating. One of the humongous universal joints that connects the transmission to the (in this case) twin screw axles out back blows to pieces and then physics takes over. The whole thing is so violent the nose of the truck flops up, Canterbury gets thrown around inside the truck like a strapped in rag doll, and the multi-ton truck jumps, bounces, and heaves like something its size should never be able to do.

The incident is shown in real-time and slow motion. The slow motion is fascinating because you can watch the moment when the join breaks and all of the stuff that happens in the second or two after it. The first thing you’ll notice is the bursts of smoke out of the exhaust stack which we think is the result of the driver jouncing around and bouncing his foot off the pedal. You can also see the rear axle literally jump off the ground and the truck make a weird lunge immediately after the failure. We wish there were some photos of the broken parts for us to revel in, though.

PRESS PLAY BELOW TO SEE A MULTI-THOUSAND HORSEPOWER BIG RIG SHATTER A UNIVERSAL JOINT DURING A PULL AND SUFFER THE VIOLENT CONSEQUENCES!

This 1954 Chevrolet 3800 Flatbed Is Work Truck Greatness That Would Make A Cool Hauler Watch The 1988 IHRA Super Nationals From Bradenton, Florida Here - This Is Fantastic!