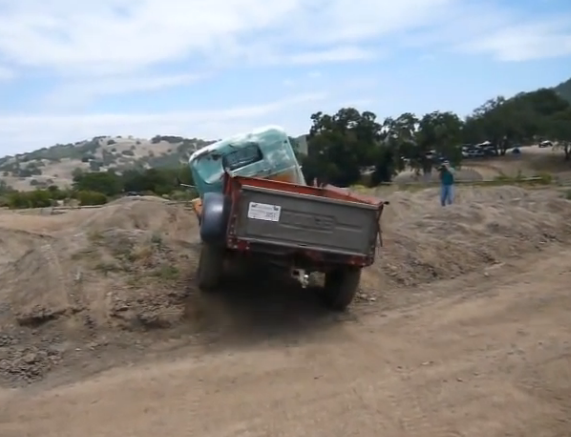 We’ve long praised and drooled over classic Dodge Power Wagon trucks but only today have we learned of the super rare and very cool Willock Swivel-Frame option that was available to Power Wagon buyers. This was a special articulating frame that apparently was only added to about 49 trucks over the course of the Power Wagon production run. The Willock Swivel frame was a pretty ingenious design that coupled the front and back halves of the frame via a pipe-like swivel joint.

The crazy articulation provided by the joint makes it look like the truck is going to bust in half and we’re sure it made the already mountain goat-esque Power Wagon an unstoppable bulldozer off road. In this short video we see a classic and classically patina ridden truck climb over some big dirt berms and it looks like the thing is twisting itself into pieces! The awesome clanking and banging of the old truck adds to the whole scene and we watched the video a couple of times because the whole deal struck us as being so cool.

There’s apparently a company making a modern version of the swivel joint and you can convert a non-swivel truck if you so desire. Given two things (1) the truck and (2) the money to modify the frame we’d be on that deal like stink on rice….or whatever the expression may be. After watching this video, how could one dare NOT modify their frame for this kind of mind bending fun. Hell, just parking the thing on snow banks in the winter to see people freak out would rule pretty hard.

Rolling Alien: Mighty Car Mods Bring In A Toyota Sera That Needs De-Pimping! Polishing Up The Gold Nugget: Buffing Out The Storage-Shed 1972 Cutlass