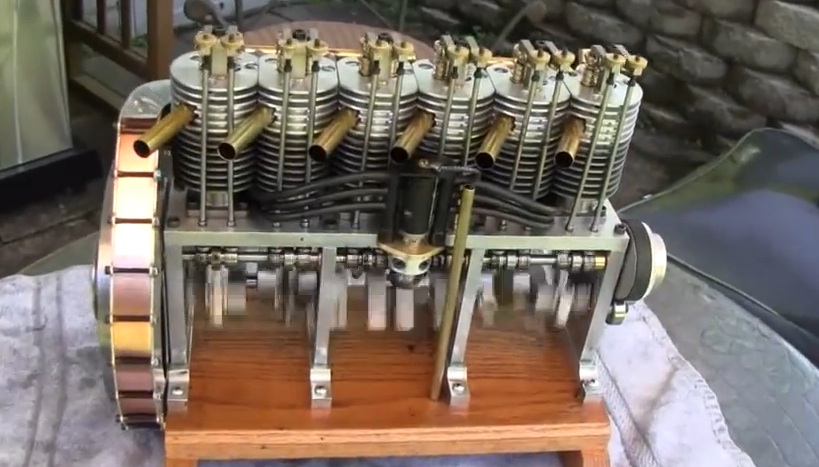 Miniature engines have been featured many, many times over the years here at BangShift because they are awesome. Most often these are creations completely handmade by their owners and they represent untold hours of machining and work that happens at night, on the weekends, or whenever spare time presents itself. This air cooled inline six engine is spectacular for about a million reasons but the one we want to focus on is the exposed crankshaft whipping around.

The reason that strikes us as so neat is because as often as we talk about RPM and engine speed, and all that stuff, it is tough to visualize what is actually happening in real time. This little bugger gives us an up close and personal view like you’ll rarely see. To boot, it sounds awesome, the cam and rockers are exposed as well, and it is just something to admire. We have enough trouble with the full sized variants of these machines that one in this scale would probably drive us up the wall. Hell, we lose wrenches at the drop of the hat so the tiny piston and rod assemblies would disappear quicker than we would know what to do about. This engine that you are about to watch has a 1″ bore and a 1.5″ stroke. This inliner displaces 7ci and we love each and every one of them. The glass jar fuel tank is pretty sweet as well.

We do have one question though. How is oil not slinging all over the place for the rods and all? We figured the crank was on roller bearings but what about everything else

Watch This Massive English Road Locomotive Make A Tight Turn And Power Up A Hill...In Traffic! The American Powertrain Monday Shift: Ride In Gene Felton's Stock Car As He Rips Around Sebring!

One thought on “Watching This Miniature Air Cooled Inline Six Engine Run With An Exposed Crank Is The Neatest Thing!”