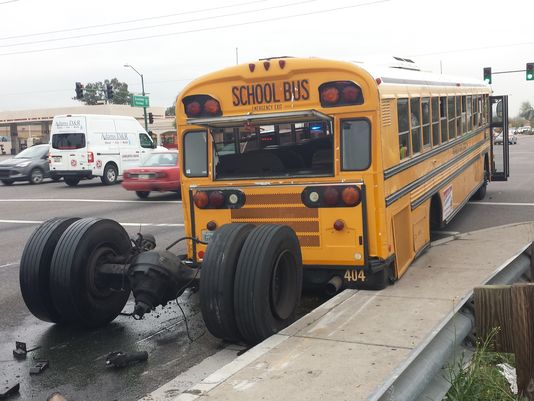 (Photo by Joe Botticelli/USA Today) – Some school kids in Arizona recently had the bumpiest ride ever on the way to school when their bus spit the rear axle out from under it at a traffic light. None of the kids were hurt but it sure seems like there will be some bruised backsides from this thing because you can imagine how the rear kicked up and then smashed to the ground when it cleared the wheels and tires that were formerly supporting it. We have no idea if the driver was practicing hole shot launches or how this baby came free but it much have provided some interesting views to everyone else in traffic. There were 30 kids on the bus at the time and we’re sure several of them will reconsider ever riding in the back seat again.

One thing we have to wonder is whether the bus was “telling” the driver that something was wrong before this happened. If you have ever looked under a cheese wagon like the one in the photo you know that the parts under there are not light duty. Of course the possibilities are pretty long that maybe the thing was in for service a while back and the axle was removed and not reinstalled properly, perhaps there was some sort of defective part that failed, etc. It just seems weird to see it happen to a school bus! Being that this happened in Arizona we can’t see rust as a potential cause.

Photo Coverage: General Motors Muscle At The Somernites Cruise - Lots Of Neat Stuff The Best Automotive Super Bowl Ad Of All Time Was The 1970 GTO Humbler Spot That Only Aired Once And Got An Option Package Killed