Wreckage Video: A Mud Dragster With a Stuck Throttle Launches Onto A Public Road! 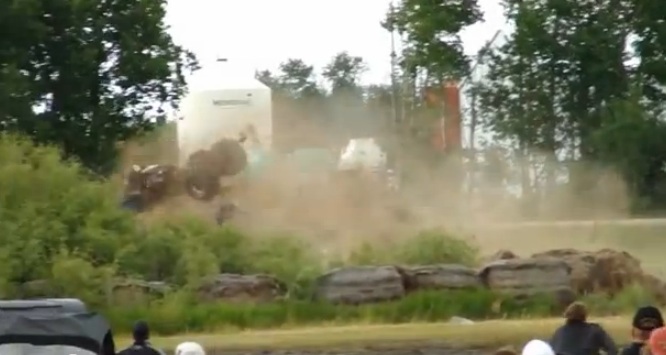 Mud drag racing is a fast and pretty violent motorsport. Short wheelbase rails fly over rutted mud pits at high speed with drivers sawing at the steering wheel to keep the slimey side down. In the case of this video, the run went fine, it was the stopping that really sucked. You’ll see the mud machine launch at full bore and then continue in that fashion long after it was supposed to be stopping!

The craziest part? The course these dudes were running down was aimed right at a public road and the only “wall” was a line of hay bales that didn’t so much as put a dent in the head of steam this racer had as he plowed through it with a stuck throttle. You’ll see him get huge air and flop down on said public road. He’s damned lucky there was no traffic coming!

This is like an insane, mini version of National Trail Raceway in Columbus, Ohio, which has a shutdown area runs across a public road. They have a traffic light, gates, and a cop stationed down there, though!

Craigslist Find: This Bone Stock 1947 Fiat Topolino Will Either Be Restored By A European Car Lover Or Chopped To Pieces By A Drag Racer Hot Rods And Hot Dogs, We Visit The Optima Batteries Annual Car Show

5 thoughts on “Wreckage Video: A Mud Dragster With a Stuck Throttle Launches Onto A Public Road!”