5 Minutes With Rich Guasco, Pure Hell Himself. The Icon, The Car, And More. 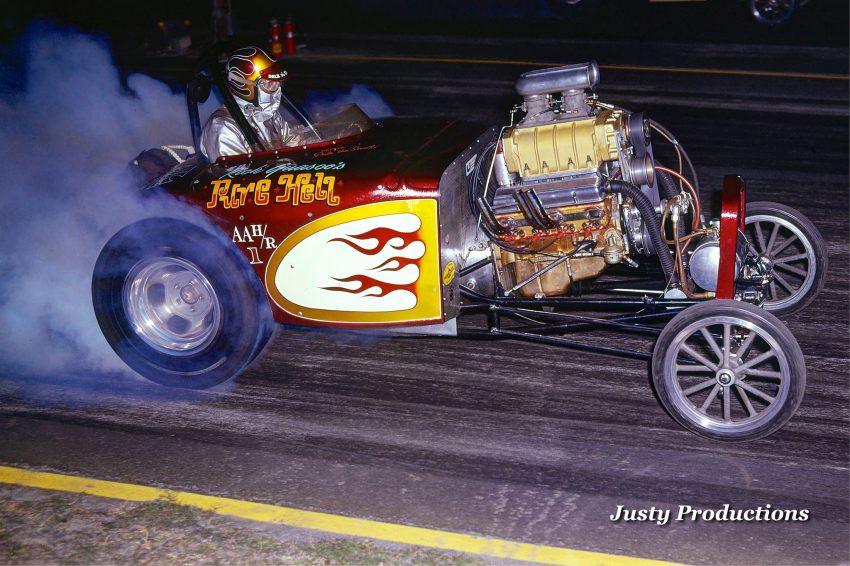 Few cars have had the impact on the drag racing industry that Pure Hell has, and few racers have had a career as impressive as that of Pure Hell’s driver and owner, Rich Guasco. Over the course of his 65-year career, Guasco has managed to win an AMBR award, become a member of numerous Halls of Fame, and become an internationally known nostalgia racing celebrity, just to name a few of his many accomplishments.

For Guasco, who grew up around his father’s towing company and wrecking yard, there was never another option than to work with cars. He would eventually take over both family businesses, in addition to maintaining his successful racing career. “From the time I was 13 or 14, all I wanted to do was build hot rods and drag race,” Guasco says. “I’ve never done anything else. Even when I was working the wrecking yard and towing company, I was still traveling around the country with teams.”

In 2015, Guasco retired from racing Pure Hell after 53 years. However, he didn’t slow down (or quit raising hell!) We snagged five minutes with Guasco back in 2016 to talk about his car, his career and his plans for the coming years.

GG: You’ve been involved with cars since childhood. What career do you think you would have had if you hadn’t gotten into racing cars?

Rich Guasco: At one time I used to dream about owning a parts store. My dad was in the auto wrecking business and had a towing company and I ended up taking those over. I grew up around cars, so I couldn’t help it!

GG: Your ’29 Ford Roadster won the AMBR trophy in 1961. A few years prior, your dad ordered you to destroy the car after a joyriding incident. How did you get the car back and win the AMBR with it?

Rich Guasco: I dismantled the car and hid the parts around my dad’s wrecking yard. Gradually, I reassembled the car. When I graduated high school and started earning money, I began to fix the car up. I’d put it in a show and they’d tell me what was wrong with it and I’d fix it. When it won the AMBR in ’61, very few people knew the story behind the car, which is kind of funny. It was very close to being junked.

GG: Who has had the biggest influence on your career?

Rich Guasco: Ed Pink. He really taught me what I know about running a fuel Chrysler. Another person was my friend Al Stanton. After World War II, he built a roadster and that was the first hot rod I had ever seen. I actually patterned my car after his.

GG: Pure Hell is an internationally famous race car and brand. Why do you think that car is so popular with the fans?

Rich Guasco: A lot of it had to do with the name, I’m sure. It just caught on. It also helped that the first few years we ran the car we were unbelievably lucky. That thing set records from day one! When nostalgia racing came about, it brought everything back two-fold. I think the car’s more popular now than it was then. We’ve been in England a few times in the last few years, and I can’t believe how popular it was over there!

GG: How did you come up with the name Pure Hell for your race car?

Rich Guasco: I’ve told so many stories I don’t remember the real story! The way I remember it, Tony Del Rio and Pete Ogden and I all kind of came up with it somehow. Tony would sometimes call me ‘Pure Hell’ when we were growing up.

GG: You almost died at Fremont Dragstrip when your dragster spun a rearend in 1964. What do you remember most about that day?

Rich Guasco: I remember wishing that I had stayed in bed that day! We had mounted a set of tires that morning and one was really out of balance and I couldn’t see…the car was vibrating so bad. It was the first time we ever ran the car. When the rear end let lose, I remember driving into a ditch to get the car to stop.  I don’t know how fast I was going but when it hit the other bank, the blower just kept going. They were cutting the car in half to get me out. It was a brand new car, so I didn’t want them to cut it apart! I didn’t lose consciousness until I was in the ambulance but I knew I was hurt really bad. I remember telling one of the guys to have a priest waiting for me at the hospital to give me my last rites. I woke up 10 days later.

GG: Why didn’t you quit racing after that horrible accident?

Rich Guasco: I knew it wasn’t my fault. The accident was caused by mechanical failure. It didn’t bother me at all. I drove someone else’s fuel altered while I was recovering. I was still on crutches and had to be helped into the car!

GG:How did you get to be so good at tuning a blown nitro engine? What’s your secret?

Rich Guasco: I’ve been doing it all my life. I’ve been running a fuel car since the early 1960s, and I have kept the same combination all these years, just with bigger fuel pumps and better blowers. It just evolved. I never really had a lot of money so I couldn’t hurt things, so I just ran it easy and perfected what I had. I had a lot of help from Dale Emery as well.

Rich Guasco: I drive either my ’51 Ford Victoria or a ’39 Deluxe coupe with a blown flathead in it. I drive them every day.

GG: If you could go back in time and meet someone, who would you choose?

Rich Guasco: I don’t even have to think about it, Henry Ford of course! What a genius he was!

GG: The 2015 season was your last with Pure Hell. What are your plans for the future, and what will happen to the car?

Rich  Guasco: Well seeing as how I’m 79, I just hope I’m still here in the future! I think that would be a milestone right there! Hopefully I am still driving my hot rods down the road and taking them on Goodguys events.

As far as Pure Hell, the original car is in a museum and (other car) car is currently sitting in my shop on stands. We’re going to service the car and get it ready to run and after that, who knows? In recent years, I’ve been traveling around the country with my daughter, Jill Swain, and Ron Rogers and the Hope family. I’m very grateful to all of them because I love being able to travel.

The Bandag Bullet Has 1500 Cubic Inches And Is A Tire Smoking Machine! The After-Party: Rockbouncers and Side-By-Sides Go Play On The Hills In Tennessee!

3 thoughts on “5 Minutes With Rich Guasco, Pure Hell Himself. The Icon, The Car, And More.”