BangShift Question of the Day: What Historical Automotive Figure Would You Pluck From the Past Into the Present? 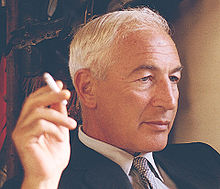 Every time we post a cool video, document a racing accomplishment, or revel in the pure awesome of a video we found on the interwebs we end up thinking that Mickey Thompson should have been there to see it. Surely, he would be into it if he were still walking the Earth. That thought led us to wonder about what figure or figures from the gearhead past we would hop in a time machine and bring back to modern times given the chance.

The guy in the small lead photo for this blog item would be one of them. That’s Zora Arkus Duntov, one of the most forward thinking automotive engineers of the last 100 years. His ideas about racing, performance cars, and developing products that an energetic youthful audience could afford to buy and then modify for competition were revolutionary and GM listened to him, amazingly.

Imagine dragging Henry Ford up to 2014. Either his head would explode, or he’d figure out all this modern junk in record time and start changing the world again, although lots of his political views wouldn’t fly these days.

Who would you snatch from the annals of gearhead history and bring into the 21st century?

Mondo-Roto Video: More New Footage Of The 12 Rotor Engine On The Dyno - The Sound Is Good Hacks of the Week from Reddit's JustRolledIntoTheShop

16 thoughts on “BangShift Question of the Day: What Historical Automotive Figure Would You Pluck From the Past Into the Present?”