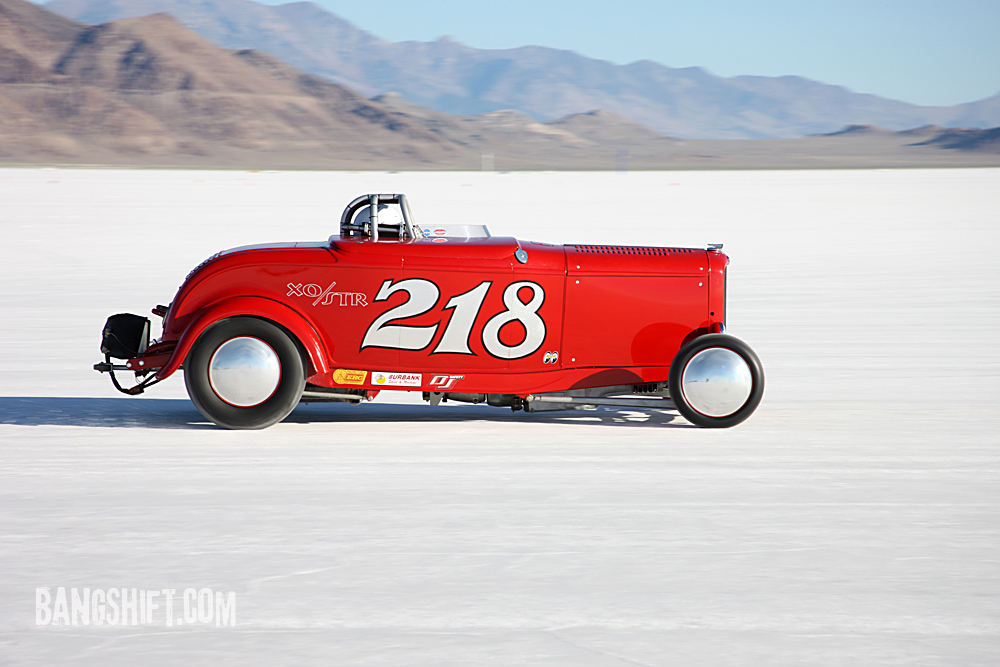 By now you’re probably sick of seeing the photos of cars running on the salt or reading our stories about cars, motorcycles, and contraptions I can scarcely identify doing the same. Our goal when we got to the salt this year was to kick as much ass, crank as much content, and share as many stories as we possibly could. Between Doug Garrison, Chad, and I we did the best we could and I can say that I am pretty happy with what we accomplished.

HERE’S A NOTEBOOK AND BRAIN DUMP FROM THE SALT – (apologies on this, it is a long one!)

Outside of the SCTA website I think we were the only people making an earnest effort to inform folks about stories outside of the streamliner wars and that was my primary concern. I really wanted to try to shine the light on stuff that most others had not been doing. With my series of “This is Bonneville” stories, I was trying to add some flavor to coverage that can sometimes lack it. I’m not going to lie to you. When it came time for me to pull off the salt on Wednesday morning, part of me was frustrated and sad that I wouldn’t be there to see the event close out and the other part of me was elated because I was going to get more than 2.5 hours of sleep that night. As I learned, Bonneville is absolutely filled with that type of duality. It was my first visit to the salt and to call it drinking from a fire hose would be underselling it. This was like trying to drink from a 75-foot wave that Laird Hamilton had jet skied out to in order to surf. The information comes in torrents. With multiple courses running at once, someone could be qualifying or setting a record at virtually all times. Juggling where to listen and who to talk to became the key. That and not becoming too obsessed with every freaking awesome race car or hot rod that rolled by.

I was asked multiple times by multiple people what my favorite part of the Speed Week experience was. While I think I have a habit of getting too profound with stuff, indulge me again if you would. I am not the guy who can answer a question like that with, “The cars!” or something similar. I envy people who can. I spend too much time in my own head thinking about this stuff, so it took me days to get my five remaining brain cells around what it was that struck me so vividly about this type of competition and the people involved. Topping it all off, whenever I told someone who asked me, I pretty much broke down every time. I was like freaking Dick Vermeil out there.

The simple fact is that a large portion of our world relies on the picto-graph menu at McDonalds to survive. Pictures and numbers are what we have boiled lots of the world down to. We exist on a planet that we have largely tailored to the lowest common denominator. There are NONE of those people on the salt. Every person there is operating on a higher mental plane. These are not people of excuses or people who know what the word quit is. These are not people who lack for drive or will or mental fortitude. They don’t lack for bravery or cunning either. That collection of people  represented the best our society has to offer in many aspects. There were engineers, mathematicians, aerodynamic specialists, amazing mechanics, self taught geniuses, free thinkers, and dudes who have brain power in areas I am not even fit to explain. That was what I liked best about Bonneville. Just being surrounded by the best people our world has to offer and sharing that space and time with them. Watching them succeed and seeing them work harder when they didn’t. Told you I get too profound about this stuff but I’ll never forget that energy. It was all time.

I always laugh when I hear guys talking about their “personal philosophies” regarding stuff like race announcing or reporting because it normally sounds like a lot of self serving crap. Well that doesn’t mean I don’t have one, I just normally don’t share it. Since its just us here, I guess I will open up a little on this end of things. I have always felt that to be a really good announcer or reporter, you have to be a good observer. Yeah, you have to ask questions and stuff but the reality is, you can learn A LOT of stuff by simply pulling back from a situation and watching stuff happen. I took the opportunity to do that a lot on the salt. Whether it was watching a team’s starting line rituals, how they serviced a car in impound, or how they assessed a situation after a run that went really well or really badly. Seeing this stuff happen organically and naturally (for me anyway) is more valuable to me than interjecting myself into a scene to “get the scoop” or whatnot. I think the story we told about the guy and the girl wrenching on the old Triumph in impound highlighted this. Just watching them operate for a few minutes before asking what their deal was allowed me to put some stuff in that story that would have been otherwise lost. Part of me has always felt like great race reporting and announcing should be like an omnipotent narrator. You don’t necessarily need to know HOW the guy has the information but you are entertained and interested because he has it. See? I told you. Personal philosophy stuff is horrible to listen to. First time and last time on sharing that junk!

The sheer desolation of the place is amazing. People from home asked me if it was like standing on a snow covered frozen lake. In a way it was, but the stark reality is that you’re standing in a place where no living organism can survive. There is a weirdness to that which I cannot really describe but when you consider settlers and others trekked across that thing hundreds of years ago and many died in the process, it becomes very real. The heat is a bizarre thing there as well. It can be literally hot as blazes with air temps in the 110+ range and significantly higher, but due to the lack of humidity it feels hot but not all that bad. The problems begin when you realize that it is 4pm and you last went to the bathroom at about 8am. Time for a water break!

There’s no sense of pretension out there. That was freaking awesome. There’s no hype machine, no promoter trying to tell you why this thing is going to be the best race ever, etc. There’s the SCTA who do a fantastic job of running the meet with a crew of volunteers that have salt fever as bad or worse than the racers, there’s a couple thousand fans that are the hardest core sons-a-bitches in motorsports, and there’s 500-600 racers out there in all different kinds of stuff just trying to do the best they can. No fireworks, cheesy ass laser show, dancing girls, whatever. It exists as a race on one of the most desolate surfaces known to man in a location that sucks to get to from any direction and by chance the fastest vehicles in the world will be there. So, “come if you want but we’ll be there either way,” is the kind of attitude I took from it and that was refreshing as all get out.

The “city” of Wendover is about one of the weirdest places you’ll ever go. I literally cannot image it outside of Speed Week. Who knew there were that man chain smoking penny slot machine players so hooked on the deal that they’d drive hours into the ass middle of nowhere to “try their luck” at a couple of the casinos in town. If you get invited to visit Wendover outside of Speed Week respectfully decline unless you are doing a sociology project of some kind. Then, by all means check it out.

Watching people order fish at dinner while we were at a place SEEMINGLY TWO BILLION MILES FROM THE OCEAN let alone the supposed locale where said water borne creature was caught was comical. I didn’t see one person who opted for fish at any of the places we ate (some relatively nice) say, “Man, this is good!” There were other things said which I cannot repeat but when you are in the desert, Brian’s guide to being a fatty fatso foodie says SKIP THE FISH.

The effort put forth in the design and construction of the cars out there was spellbinding. From the Allen Johnson Studebaker which was hand built in every possible sense of the word to some of the more humble machines that were a consortium of local talent and investment between friends, I loved them all. I wouldn’t own them all,  but I loved them all.

It was cool to see the guys from MotoIQ.com out there on the salt and even cooler that they smashed an existing record in H/Production Supercharged to pieces. The MotorIQ fellas are great people and we enjoy harassing each other and making scenes at some of the events we both attend during the year. Kudos to them for putting the effort forth and making it happen with great success.

Being there before sunrise and watching the teams wrench on their stuff in impound is beyond the coolest thing ever. It is just the stuff to be up with all these guys and girls trying to make their own little bit of history and then to see the sun coming up in the background with nitro burning engines cackling away and making all that glorious noise…it was something that made me very happy to be alive. A really spiritual feeling and I am notoriously lacking on that front. Ultra good.

God or Mother Nature or whatever supreme force or being you believe it has a sense of humor. How do I know this? Because they created the ultimate race course for this sport in the form of the Bonneville Salt Flats but they covered it in a material that is constantly variable, grants nothing close to good traction, and literally tries to eat the very cars that are racing on it. It is all wrong, but it is all so very right.

Lastly, leaving the place and contemplating what I had been involved with over the near week that I had been on the salt was a good soul search. I didn’t leave thinking that I needed to come back with a car in 2014 or that I need to get a red baseball cap as a member of the amazingly cool Bonneville 200mph club. I left thinking that I needed to have a better plan for next year on how to make the coverage better. I left with a sense of duty to better inform and entertain. I never want to see Bonneville become anything other than it is. No influence from big money or what not (even though there is some HUGE MONEY out there on the salt). I just want to keep telling people who will never get there what it is like, what it isn’t like, why it is important, and how it stands as the great burning core of things that rule about racing. 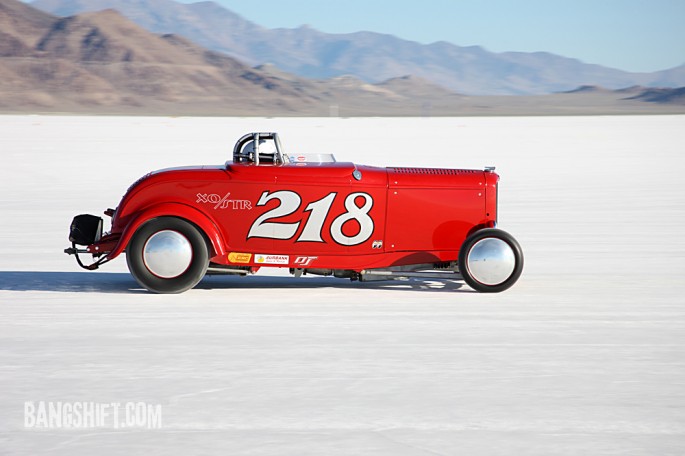 14 thoughts on “Barnstormin’: The Bonneville Edition”