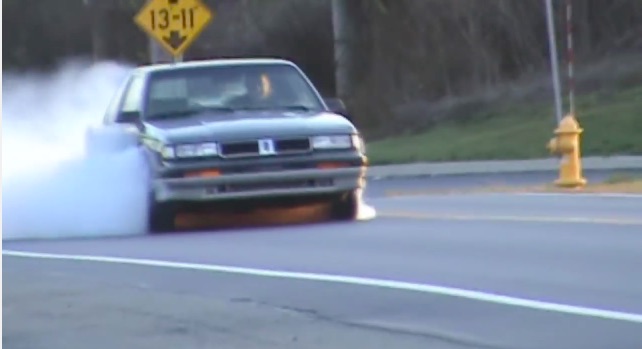 A few years ago, I ran a story on a 1986 Olds Cutlass Ciera GT and uttered a phrase that has haunted me ever since: “Pro Commuter”. The concept has some merit: giving what would be an otherwise unloved and unworthy daily beater that has decent looks going for it some teeth. A little power, a bit of handling, and some MPG-maximising tips and you could feasibly have a daily that doesn’t suck to drive everyday. Not every car would qualify, so don’t bother bringing up Chevrolet Corsicas or Dodge Dynastys….there’s no hope for those things. But a Chrysler Laser, or a Ford Escort GT, maybe there’s something there. But I stand by one statement: the Ciera GT is a handsome little car, one of GM’s better-looking 1980s FWD machines, but horsepower is certainly needed.

Josh Ricker is the owner of the Cutlass you’ll see in this video from a few years ago, and as far as I’m concerned, this is proof that I didn’t suffer from temporary insanity when I wrote that article. The Cutlass is still around, though it’s been down for repairs for a bit now, but hopefully it comes back to life as it was or better…this mean little SOB gets down!

Technical Zen: This Guy Explains How He Created A Digital Dash For His Eagle! Classic YouTube: Maynard Troyer's Monster Rollover At The 1971 Daytona 500

2 thoughts on “Classic YouTube: A 400+ Horsepower Turbocharged Cutlass Ciera GT Having Some Fun”