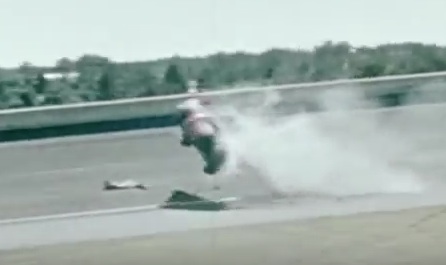 Maynard Troyer’s NASCAR career was short. He only had two active years, 1971 and 1973. Two years before calling it quits seems strange, but not so strange as the gap year in between, right? Well, let’s clear up the confusion right now: the footage you will see below probably explains why Troyer took 1972 off entirely. He was running in the Daytona 500 in a 1969 Ford Torino when, on lap nine, the engine called it a day while Troyer was at full chat. The rear wheels locked up and Troyer went on one of the nastiest rides we can think of ever seeing. The Torino slid down off of the banking, dug in and proceeded to go over and over fifteen times at speed before the car finally, mercifully, landed wheels-down. Reportedly, Troyer only suffered a concussion in the ordeal, but could you blame him for packing it up and taking a year off to do anything else?

NASCAR has made incredible gains where safety is concerned since the “early days” where basic roll cages inside of factory-made machines was all that really was required. But watching the Torino pinwheel down the straight is testament enough to the level of safety that was present even back then.

Classic YouTube: A 400+ Horsepower Turbocharged Cutlass Ciera GT Having Some Fun Pace Car Indeed: Ride Along In This 1979 Ford Mustang IMSA Racer As It Rolls Around Mont Tremblant!