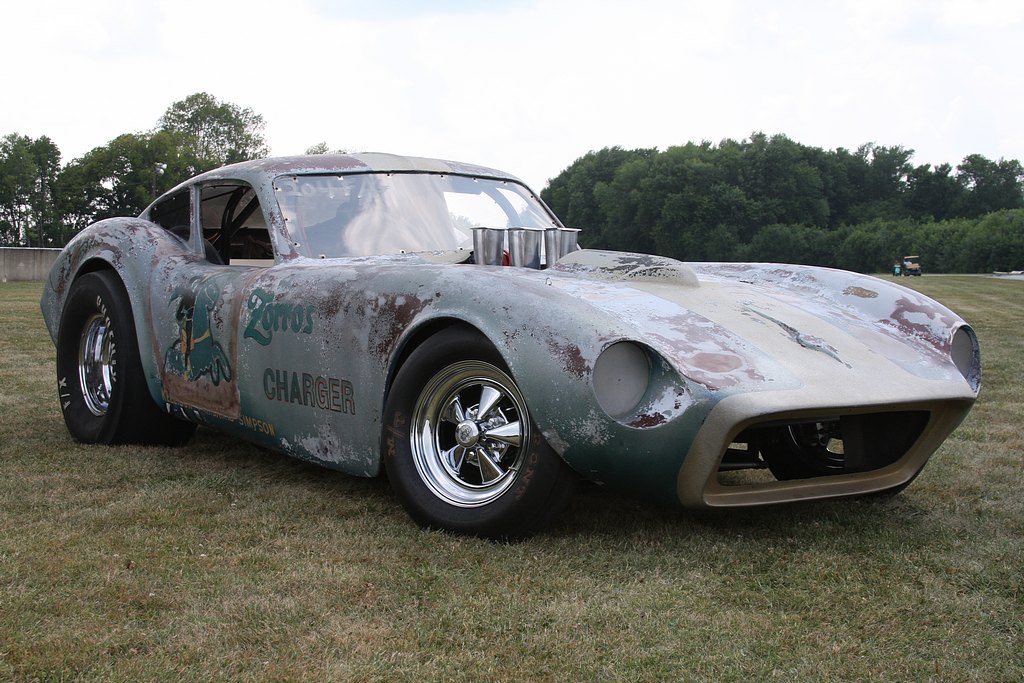 (Since we’ll be live broadcasting the 2014 Holley NHRA National Hot Rod Reunion from Bowling Green next week, we decided to run some of the coolest car features we shot at the race over the years this weekend. Here’s another of our favorites, “Zorro’s Charger”. Boy is this a neat piece. Details on our broadcast coming soon!) – This is not a Jaguar, this is not a Cheetah, this is not a Devin, and unless you know what the heck a Kellison is, you’re never going to guess. When Chad and I saw this car roar down the strip at Beech Bend Raceway last weekend we nearly leaped off of the scaffolding and gave chase. With a high winding small inch Chevy engine mechanically injected on alcohol, the kind of patina and shabbiness that no man could ever replicate, and awesome racing history to boot, this is one of our favorite old race cars ever.

Starting with the most obvious thing in the car, the body, we can tell you that it is called a Kellison J-6 Panther. The Kellison company was in business for about 20 years selling fiberglass sports car bodies and kit car packages to people who wanted to spice up old Corvettes, small English sports cars, and other vehicles with more stylish and sexy bodies. Most of these cars ended up as road racers or just as sports cars that guys drove on the street. A few of them became drag cars and there are a few old photos of Kellison’s with blown engines and the like at the strip. We’ve never seen another one in the wild aside from this example owned by Robert Walker of Tennessee. 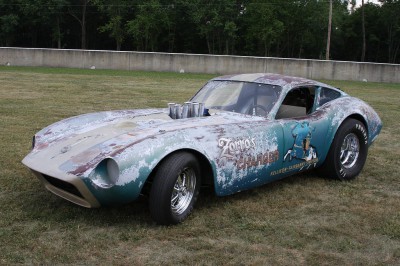 You can see all of the right styling elements in this body to make it appealing to hot rodders and road racers alike. Kellison certainly took some cues from cars like the Jaguar XKE, Cheetah, and Devin that we mentioned above and melded them all into a package that we think looks pretty slick. The massive slicks filling the large rear wheel openings and the skinnies up front certainly “make” the look for us, but even in the trim of a road racing car, these babies were lookers, then and now.

Current owner Walker was the right man at the right time for this car. We’re of the belief that sometimes people find cars and sometimes cars find people, this is a case of the latter we think. Robert is in the telecommunications industry and his work takes him through lots of central Tennessee. He happened to be on a job one day and saw this car sitting on the side of the road, for sale. As it turns out, a group of guys who had no clue bought the thing from an estate sale the day before and were looking to flip the car for a few bucks. Walker needed about five minutes to fall in love and buy the car. That purchase sent him down a very interesting historical road regarding this Kellison. 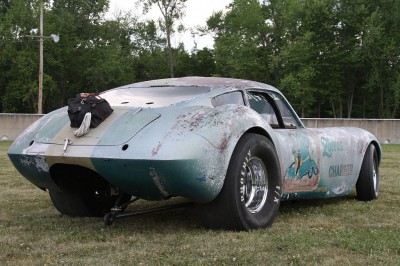 Through some research and by going through the collected documentation with the car, Walker was able to discern that the machine was built by a Dr. Randall Zorn. Dr. Zorn was an ophthalmologist in Tennessee and obviously had an affinity for high horsepower and straight line acceleration! We feel that both his selection of this particular body and his choice to name the car “Zorro’s Charger” speak to his educated background. There’s some appreciation for the fine lines of the Panther body and then the name is downright literary with respect to the majority of 1960s drag car names we have seen that refer to recreational drug use, lady parts, and other awesome uncouth stuff.

Zorn commissioned well known Memphis based chassis builder John Albright to weld the tube chassis that the body sits on. The car is 100% original in the fact that it rides on the original chassis, has the original body, and even the original DZ302 based engine is providing the power.

Albright built lots of strong running cars in the Mid-South during the time period that Zorn had this one built, which Walker believes is 1968 or thereabouts. He even constructed a few cars for Sox and Martin back in the day. Robert said that this car drives as, “straight as a string” and the fact that he is relatively new to the sport and can rip off consistent elapsed times in the 10.0 range without breaking a sweat says something about that. Other than upgrading the brakes and removing the clutch-flite style trans for a modern TCI piece, and putting new wheels and tires on it, this car is as it was in the late 1960s. 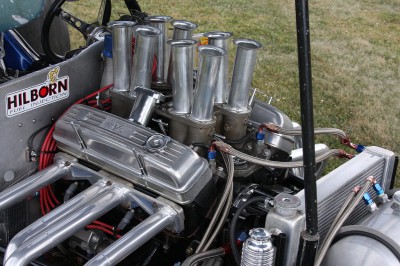 The engine in the car is a real deal DZ302, crammed with a very stout Engle cam, 14.25:1 compression and fired by a Vertex magneto. The original Hilborn mechanical injection feeds the engine, albeit with new velocity stacks because the old ones were jacked up beyond repair, so they were replaced. The power heads through a TCI Turbo 400 and into an Olds rear that packs stump pulling 5.38 gears. We didn’t ask Robert what he sees on the tack at the finish line, but the motor sure sounds like it is singing when it gets there!

This car was raced regionally when Zorn had it in the late 1960s and we’re trying to mentally pin down what class it would have run in back then. We’re assuming that it competed in one of the gas classes (obviously not supercharged) due to the fact that it has functioning doors. If it were run as an injected funny car it would not have such luxuries as doors! 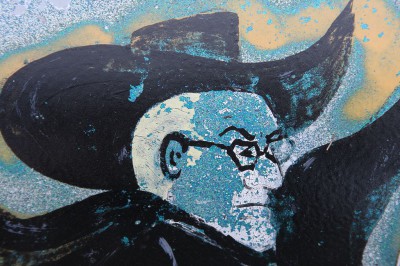 We already mentioned that Dr. Zorn was an eye doctor so we found it exceptionally cool that the dashing figure painted on the door (which we assume is a cartoon of Zorn himself is equipped with glasses! This guy either had a great sense of humor or his pissed off the painter and those glasses were some subtle revenge. We’re tending to think that he had a good sense of humor because if it was him painted on the door in such a dashing fashion, what other reason is there?

Robert Walker has owned this car for three years and other than getting it running and fixing what needed to be fixed for safety reasons, he has done nothing extra and plans to do nothing extra. The true wonder of this car is the fact that it survives exactly as it should, an unmolested example of what actually was in drag racing circa the late 1960s. The scene in the South was so wild at that time, Zorn may have just match bash raced this thing in open fields or small heads up races at eighth mile and quarter mile tracks in the Tennessee valley. 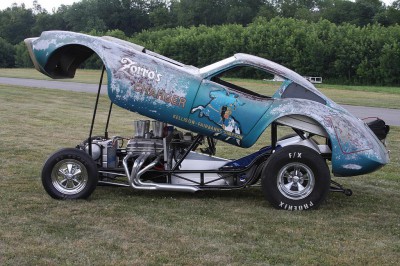 There’s not a lot more to say about this car, but we have a lot more to show you. Along with the photos in this story, we have a gallery of nearly 60 photos that will show you every inch, line, piece of patina, and sexy curve that this awesome car has. They literally don’t make them like this any more (and that may be a good thing, it took a couple of dudes to heave the body up and one more to lay the support poles in for this shoot. Zorn was either one strong dude or he traveled with help at the drags!)

SCROLL DOWN FOR THE LINK TO A HUGE GALLERY OF KILLER PHOTOS DOCUMENTING “ZORRO’S CHARGER”! 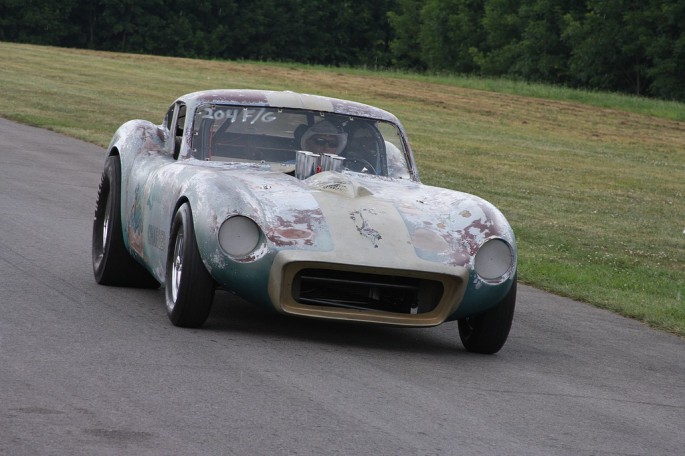 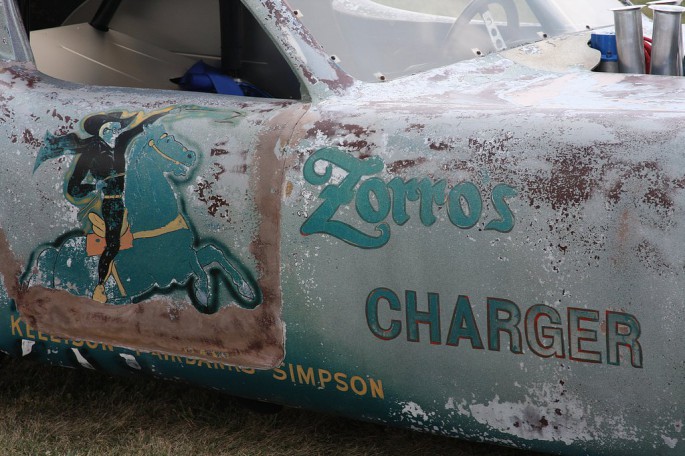 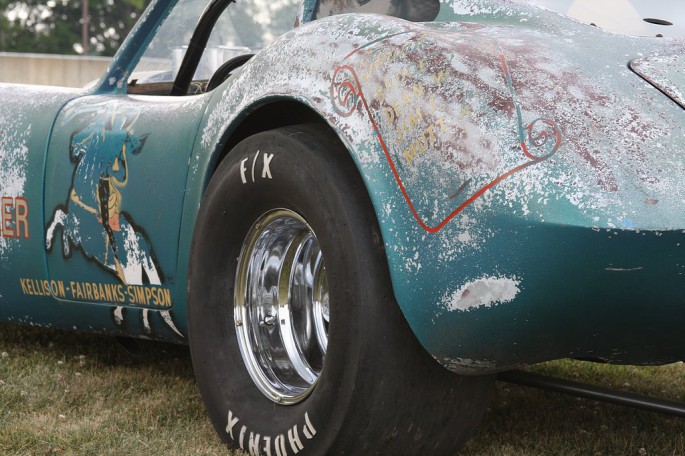 Listen To A Live Audiocast From The Ohio Mile Today! Live Streaming Audio Of All The Action On The Track Starts At (About 8am EST) Don Garlits And The Swamp Rat 37 Electric Dragster Are On The Track Today In Search Of 200 MPH! Up To The Minute Updates Here!