Missing The Point Has Never Been More Awesome: A Nitrous-Snorting Cobra Runs The Strip! 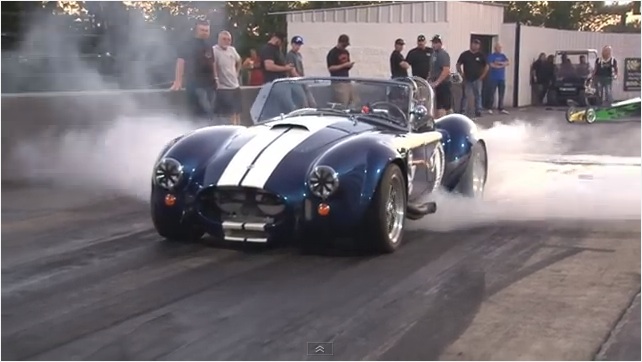 Carroll Shelby made a name for himself as a race car driver, but by 1959 he had been forced to retire from wheelman duties due to his heart health. Normally, he had nitroglycerin pills to take care of any issues he experienced, but when he partnered up with British manufacturer AC and got permission to jam Ford engines into their Ace roadster, he found a slightly better way of jump-starting his heart. The AC Cobra is an automotive icon, from it’s hunkered down shape to it’s reputation as one of the hairiest vehicles you could slip behind the wheel of. Built to take on Corvette and Ferrari at their own games, a few Cobras were converted to Dragonsnake specifications. Yes, that’s right, the Cobra had a drag pack option!

This isn’t a Dragonsnake, and we’re willing to venture that this isn’t a CSX-numbered Cobra with all of the kit cars out there. But that doesn’t matter, because what is going on here is that sweet little roadster is ripping it up at the Throwdown in T-Town at Tulsa Raceway Park. Urban Hillbilly Videos was paying attention when the snake slithered it’s way onto the track to go head-to-head with a C2 Corvette. We know how valuable the real deals are, but it still doesn’t diminish seeing a Cobra come out in full anger.

3 thoughts on “Missing The Point Has Never Been More Awesome: A Nitrous-Snorting Cobra Runs The Strip!”