Best of 2019: The Ford SVT Thunderbird Proposals – When Ford Decided Give The ‘Bird The Bird 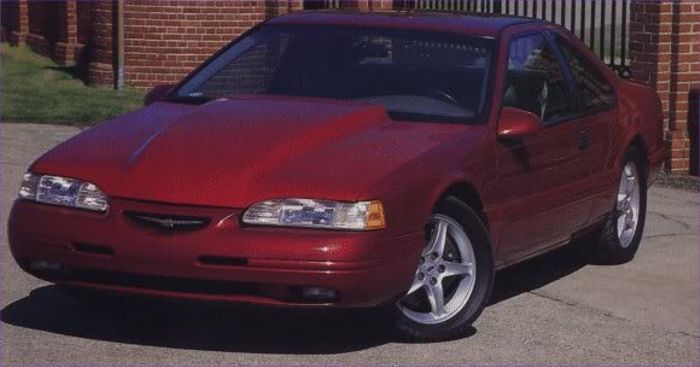 In the mid-1990s, a horsepower war was firing off that consumers couldn’t quite access. Yes, there was the usual Mustang vs. Camaro/Firebird deal that was heating up, but those cars were still hanging under 300 horsepower for the most part. But if you looked at the inner workings of both GM and Ford at the time, you saw a couple of names that stuck out: John Coletti and Jon Moss. SVO, SVE, and SVT versus Chevrolet Specialty Vehicles and the mystical Toy Box collection of cars. There were the cars themselves: the black-and-silver ZL-1 Camaro, the big bad Boss Mustang, and a myriad of other vehicles that were teaser prototypes. More often than not they were showoffs or market thermometers, display cars that didn’t always make it to market but one or two that would. Case in point: during a 1998 episode of Motor Trend Television, a black Monte Carlo with a supercharged 3.8L V6 showed up, ripping the skins off of it’s front wheels. That car happened. Shame the big-block F-body that they highlighted didn’t. 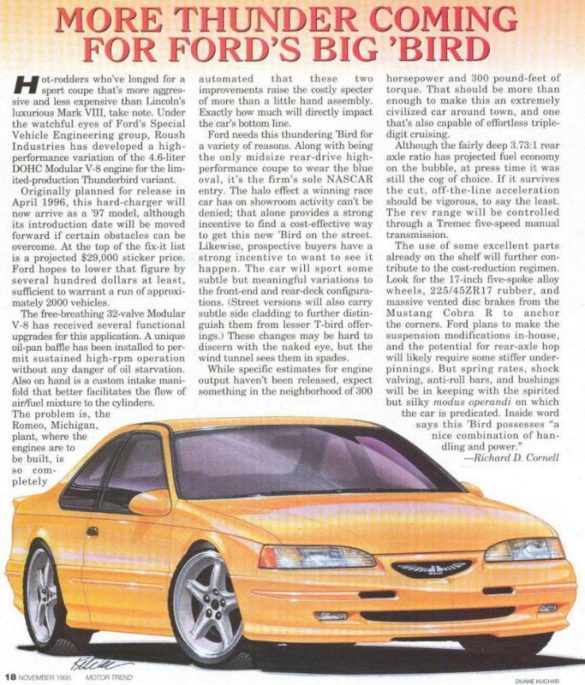 Ford tended to do the same thing. They started in the early Eighties with the SVO Mustang, which while unique was on-par with the 5.0L cars. The 1993 Cobra was a better shot, as was the first-gen Lightning pickup and the Cobra R series, but if you want to see when SVT really took off, start looking about 1995 or so. The Mustang Cobra, the SVT Contour, the SVT Focus, the second-generation Lightning, the Terminator Cobra Mustang…Ford knew how to make a product, make it exciting, and with Coletti’s swagger, make it sell. But there is a list of products that SVT tried out that didn’t make it to market. Among those stillborn projects is rumored to be an Escort that was over the 300 horsepower mark for the American market, a V-10-powered Mustang mule test car, a supercharged V8 powered Ranger wearing a sidestep bed and an Explorer front clip, the Mustang Super Stallion (a 5.4L powered stomper that could run on gas or alcohol), and one other that almost made production…if the platform hadn’t been so hated.

The MN-12 Ford Thunderbird had been hated from the moment the cars debuted. The cars were heavier and costlier than Ford had wanted by 250 pounds and $900. According to lore, then President of Ford Harold Poling tore into the entire MN-12 program staff during a meeting in January 1989 for missing the targets, which pissed off program manager Anthony Kuchta so badly that he voluntarily retired that year. Outside of Super Coupe versions, which have a strong following, though, the Thunderbird didn’t make much of an impact on sales…it’s only saving grace was it’s presence in NASCAR, where the cars did battle with front-drive based GM competition. By the mid-1990s, the Thunderbird was in the doldrums, selling enough to keep plodding on, but without any real flavor.

But cue in Special Vehicle Engineering once more. Sometime around 1996, the idea came about to give the big Bird the kick in the ass it desperately needed. The Thunderbird’s best attributes were it’s slippery shape, it’s independent rear suspension and it’s racer image from NASCAR, so why not hot rod the MN-12? Depending on who you ask, there may have been as many as five or only one Thunderbird modified to SVT standards. With certainty, one was made because it was driven on the Hot Rod Power Tour. The plan was a 4.6L V8 four-valve engine with a blower sourced from Eaton, mated to a five-speed manual transmission, and outfitted with suspension parts from Eibach. They were supposed to have larger sway bars, bigger brakes, and the works, but the SVT Thunderbird’s legend from this point forward gets more convoluted than the story of Bigfoot. According to a quick summary of the Internet, Coletti kept one for himself, but on the other hand all of the cars were dismantled and destroyed. The cars were complete, while they had the engines, trans, body mods and Eibach springs…and nothing else. You can get lost in the legend for days on this stuff. 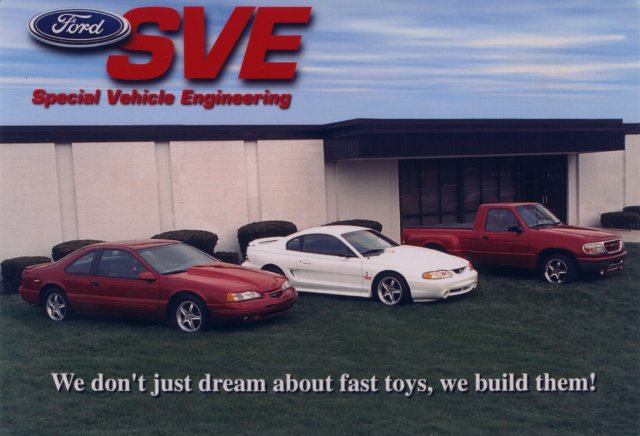 No matter what happened, the truth was that there would be no SVT Thunderbird. By 1997, it was clear that the Thunderbird and Cougar had no future at Ford, and that the lines would be shut down, with the Lincoln Mark VIII following suit in 1998. Big five-door coupes didn’t sell, rear-drive was a novelty and no matter how advanced the MN-12 platform was, it wasn’t going to make anyone within Ford’s approval system happy. So it was killed off and really wasn’t replaced. In the 10-year anniversary book that SVT put out, there is a caption next to the pictures of the red T-bird that went on Power Tour:

“According to former SVT marketing manager Tim Boyd – whose career at Ford spanned a quarter century – not producing the supercharged 4.6 SVT Thunderbird was the hardest decision he’s ever faced in his career.”

In an interview for an article on the new-for-1998 Contour SVT, Boyd addressed this by mentioning that the Thunderbird didn’t contribute enough to the bottom line to justify it’s existence after years of neglect. While there is no doubt that the Thunderbird was neglected, could it have been saved? Playing the guessing game and using hindsight always leads to interesting discussions. But look at what showed up after the SVT Thunderbird was denied: IRS for the Mustang Cobra, shortly followed by the 390-horsepower supercharged Terminator. Had that bomb dropped in the shape of a Thunderbird instead of the Mustang, it’s not a far-fetched bet to say that it might have been enough to give the T-bird a reprieve…or, at least, a proper final send-off.

Best of 2019: Historic Drag Video: Garlits Does England Circa 1976 -- An Awesome Look At Big Daddy In The Mid-1970s! Best of 2019: Watch Jet Car Racer Brian Mitchell Put On A Massive And Completely Unplanned Fire Show At Great Lakes Dragaway

5 thoughts on “Best of 2019: The Ford SVT Thunderbird Proposals – When Ford Decided Give The ‘Bird The Bird”