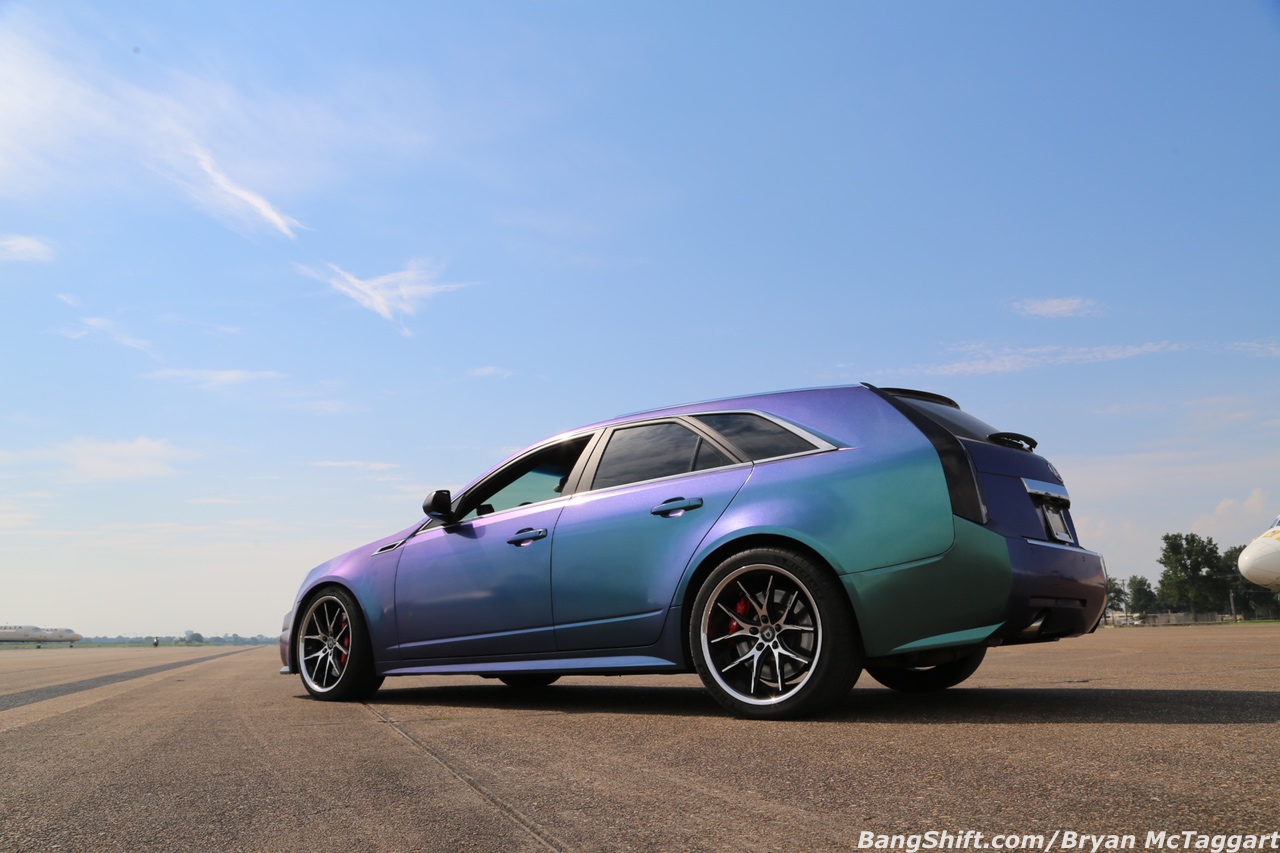 It’s always fun to debate the merits of a street car that has performance numbers far and above what it should, isn’t it? Somebody says their car has “X” amount of horsepower, it’s time to break out the dyno sheet and prove that they aren’t blowing more hot smoke than a tractor hooked to the weight sled, spooling up the turbocharger. The moment you hear, “Oh, yeah, my car runs (whatever time/speed) at the strip”, YouTube videos have to be shared or timeslips have to be dragged out of the glovebox to verify that the owner isn’t chock-full of the freshest post-process cattle feed you can find. We’ve become a culture obsessed with honesty not for the sake of being upright and forthcoming, but because there are so many con artists out and about that every claim is suspect. 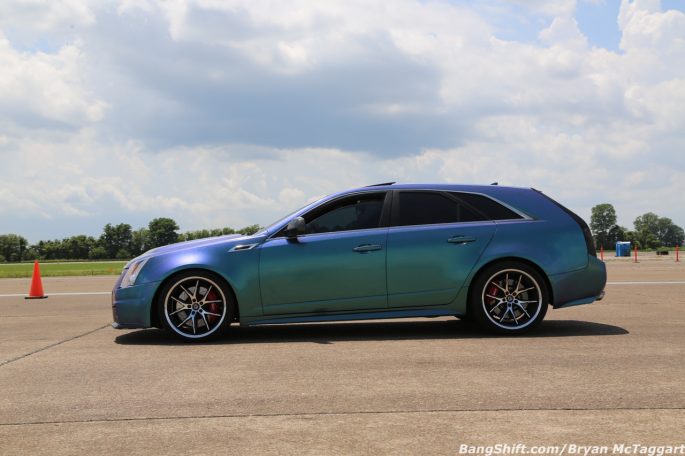 Now, when you’re actually at an event, like I was at the ECTA Firecracker Mile, it’s very simple to check to see if the number is legitimate. And for this multi-hued 2014 Cadillac CTS-V wagon, it’s solid: 204.545 over a measured 1.25 mile course. It’s no shock that a CTS-V is a fast mover…I got the chance to drive a stock version back in 2012 and walked away highly impressed with the car, and I know it’s on my wife’s short list for dream machines. 204 miles per hour is moving, but with the right parts, the right massaging and a driver who knows their machine, it’s not that unheard of. 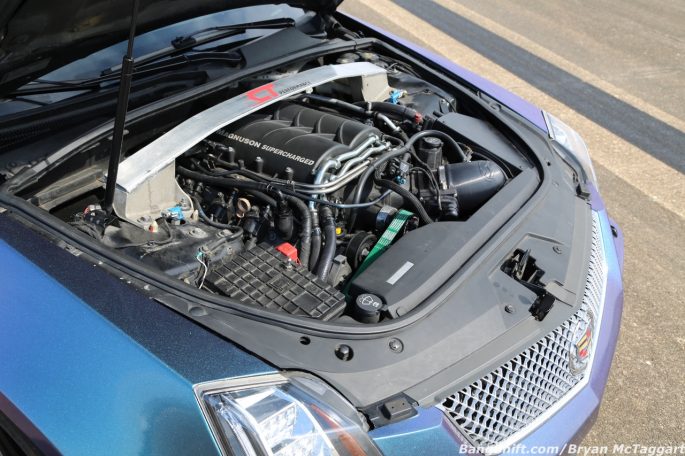 But this is where that whole skeptic part comes back. You see, Devin Taylor’s Caddy now comes under the study of whether or not it’s a true street car. In person, nobody is going to really shoot their mouth off at the nearly seven-foot-tall Taylor, but on the Internet…well, you know. Yes, on the outside it passes the test…but did the interior come out? Is there just one fiberglass seat? Is there anything left inside or was it all left in the garage in the name of weight savings? Did it get towed to Blytheville or was it driven there? Is it on exotic fuels or what any schmo can pump into the tank from a good gas station? You know the questions…forums filled with Internet knowledge hoarders would be at the ready to start picking this wagon apart. 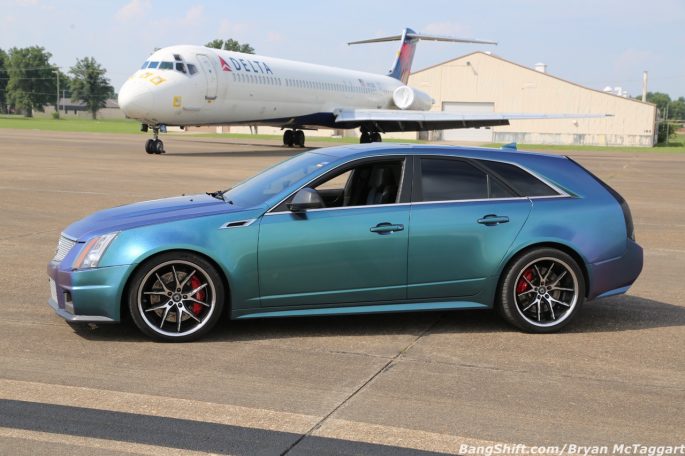 Well, let’s give you the rundown on what you’re seeing here: you have a pretty standard LS build for the 6.2L LSA mill that features FIC 1300 injectors and a Magnuson supercharger changeover (the stock unit for a CTS-V is an Eaton unit). The transmission is a stock unit that’s been beefed up to hold up to the grunt, and after that…well, everything else you see, from the paint (Black Rose undercoat, Blue Pacific Metallic overcoat) to the wheels. Okay, that’s pretty good, but again…what was was removed for the CTS-V to get into the 200 MPH club? Well…nothing. After watching Taylor make a rip down the airstrip, I followed the car over to the space where the CT Performance shop crew had their cars and looked inside the wagon’s opened tailgate. 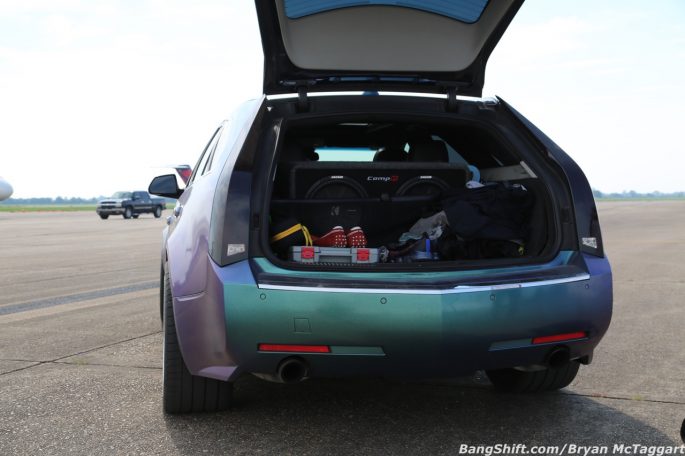 Strike me down if I’m lying, but everything seen in that photo was present and accounted for right after the run, including the box holding two 12-inch Kicker CompR speakers. This Cadillac runs at everyday weight, and will run the number. It can then go park in a car show, rattle teeth with the bass, or take several adults out for a food run. The end…it’s a useable car, not a racing machine carved out of what was once a useable car.

And the coolest part of the whole deal isn’t the car, it’s the man. In person, Devin was as cool as it got, even when one of his CT Performance co-conspirators was running over, quoting the entire “Now THAT’S how you supposed to drive!” line from the movie “Bad Boys” after his fastest run. When I asked who he wanted to thank, his list was concise: everybody at CT Performance who helped make the car into what it is today, his family, and the governor of Arkansas for even allowing the Firecracker Mile to go down in the first place., which allowed him to make the runs down the tarmac.

Real street car? Yes, it is. Real potent one, real pretty one, real useable one. No more questions, please. 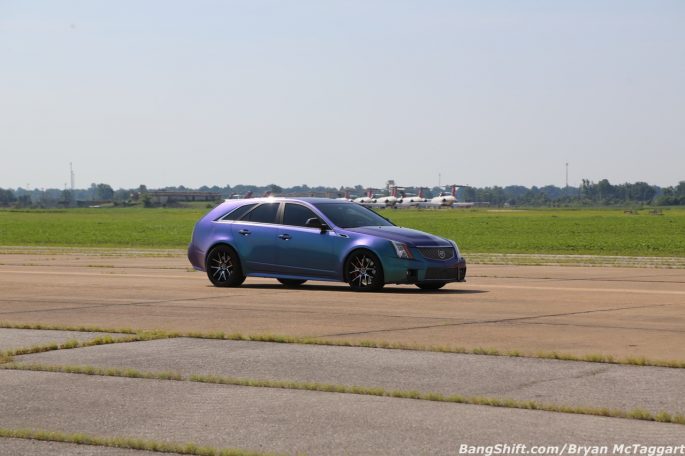