Classic YouTube: When The Boost Kicks In On This Wild Jeep SRT-8, The Red Mist Appears…Literally 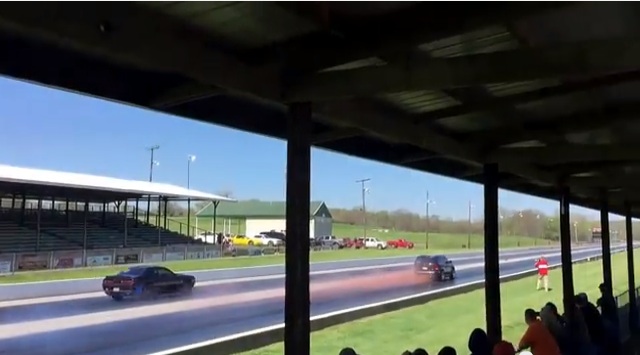 OST Dyno’s 2006 Jeep Grand Cherokee SRT8 is one sincerely wicked piece just sitting still. With drag radials on all four corners, a seriously pressurized 6.1-based 426ci third-gen Hemi under the hood and two sewer pipes for exhaust, you half-expect to see videos of it killing super cars on 1320Video’s YouTube page. (They aren’t there, I looked.) ChallengerFest 6 was the Jeep’s first outing with it’s new engine, which was built up by HRH Performance and features a Manley crank, Manley rods and Wiseco pistons. The Jeep was buttoned up and put on a dyno two days before ChallengerFest and the numbers…well, there weren’t any. Seems the Jeep had a little trouble with traction, because it would blow the tires off at 94 MPH. Yikes!

The real show, however, came when Mike from OST Dyno rolled the Jeep into the lanes. I had caught the crew feeding the beast C-16 in the pits, so I ran to see this thing launch, expecting greatness. It’s launch was softer than I expected, but around the 330′ mark a tornado formed somewhere under the hood and the Jeep was gone, with red vapor pouring out of the exhaust. Mike later told me that the Jeep’s system was reading 30 PSI of boost and may have been pushing more, since 30 PSI is the max his system can read. As far as the red mist? The previous engine lived on a diet of E-85, and due to the high water content and the Jeep sitting for a while during the build, rust had formed in the exhaust and must have been blown out by the high pressure.

The entire video shows the drag racing action from ChallengerFest 6, but is skipped forward to the Jeep’s testing run. Be sure to check out the rest of the footage as well!

3 thoughts on “Classic YouTube: When The Boost Kicks In On This Wild Jeep SRT-8, The Red Mist Appears…Literally”