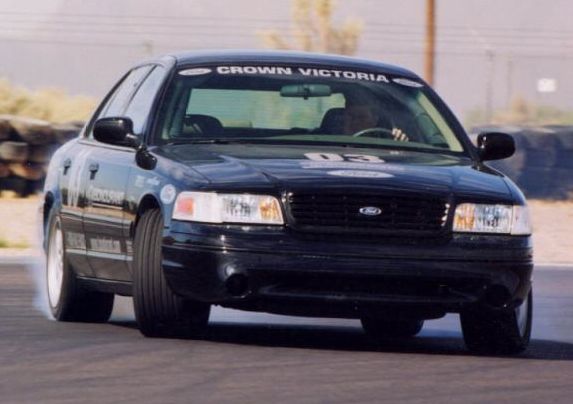 The Ford Crown Victora, in it’s Panther platform life, was never truly a performance car. Sure, everyone and their mother has that headlight design burned into memory, just in case they flew past one a few miles an hour too fast and had to start digging for excuses, but even the cop cars weren’t balls-out performers, with the best power plant being a 250hp 4.6L two-valve engine hooked to a four-speed auto. Not quite what Bob Bondurant was wanting for a multi-passenger vehicle for his driving school in at Firebird Raceway in Arizona. Instead, either on purpose or by accident, he ended up turning Ford’s Crown Victoria into the sleeper dreams are made of. 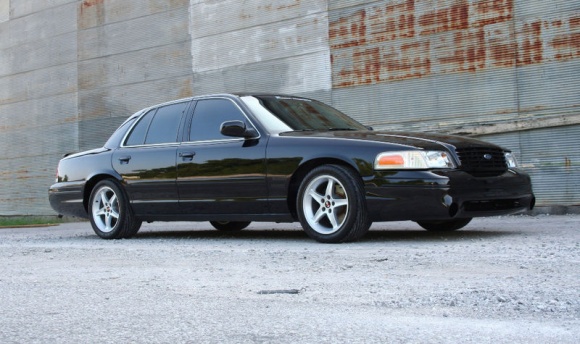 Bondurant, at the time, was aligned with Ford and was preparing to retire the fleet of Taurus SHO’s that had been doing the dirty work on the track for years, but wasn’t finding much to his liking in Ford’s lineup. The requirement list reads like a options list dream: four doors, rear drive, and manual transmission was a requirement, as Bondurant wanted to be able to teach heel/toe downshifting. After giving the front-wheel drive Contour SVTs a chance, it was decided that they weren’t up to the task and they started looking at the Crown Victoria for the next car. Unfortunately, the low power and the automatic-only options weren’t that attractive. After talks between Ford and Roush, it was decided that eighteen Crown Vics would be purchased and shipped to Roush for modifications. The 4.6L two-valve and 4R70W were yanked out of the cars and the 4.6L four-valve and T-45 five-speed manual transmission were stuffed in. The engine breathed out of modified down tube headers that had the catalytic converters deleted. A Contour console was installed for the shifter and the emergency brake, which was converted to a handbrake setup. Additionally, a radiator from a V-10 F-250 and a pulley-driven clutch fan and a Cobra R oil cooler were installed to better deal with the Arizona summers. After all of the engine tweaks, the Bondurant Crown Vics were rated at 350hp and 316 ft/lb of torque…a good bit more than the Camaro SS of the time. Suspension-wise, Eibach springs, Monroe shocks, Performance Friction brake pads, and stainless brake lines were placed at all four corners, keeping the 17×9 Cobra R wheels and performance rubber in check, though the 3.73 rear gears and Moser axles out back would make hasty work of the rear tires. Lastly, a trunk lip spoiler was attached to the back, a Mustang Cobra-style front air dam was attached with the foglight recesses used to run the brake cooling ducts, and a Mustang Cobra gauge pack was installed into the Vic’s dash. In the trunk a Fuel Safe fuel cell replaced the stock tank and the battery was encased in an “explosion-proof” box. The icing on the cake was the full roll cage with window nets, a fire suppression system and the Recaro front seats with five-point harnesses. 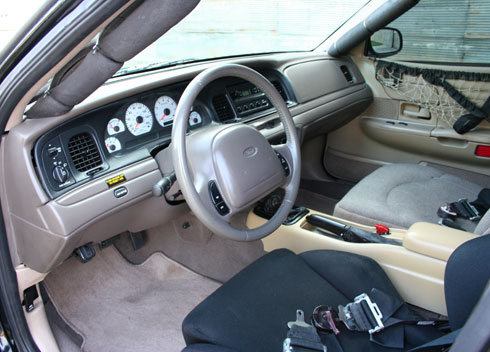 The cars, numbered 1-19 (there was no #13 car) were beat on daily by pro drivers, wannabe drivers, and staff alike for years until Bondurant aligned with General Motors products. The Crown Vics were sold off to employees of Bondurant School of High Performance Driving, though rumor is one was kept by either the school or Bondurant himself. The cars were sold without a title and a receipt that basically said that the car couldn’t be titled for street use. A couple of individuals have managed to get past that detail, since putting on Cobra Mustang catalytic converters would bring the car into legal territory for the emissions police and a little luck at the DMV would take care of the paperwork. What you would end up with is a Crown Vic perfectly set up for road course racing that could drift it’s ass off with four friends screaming for dear life in the car with you. Hunting 1990’s Impalas wouldn’t be fair, and even the Mercury Marauder wouldn’t be able to touch this car without serious modifications. Sometimes the cars designed for the heaviest use make the best toys.

The American Powertrain Parting Shift: Ride With Dave Cech In His NHRA J/Stock 1966 Chevy II This 1974 Dodge Coronet Tears Up An Autocross Course With All Of The Body Roll You Would Expect!