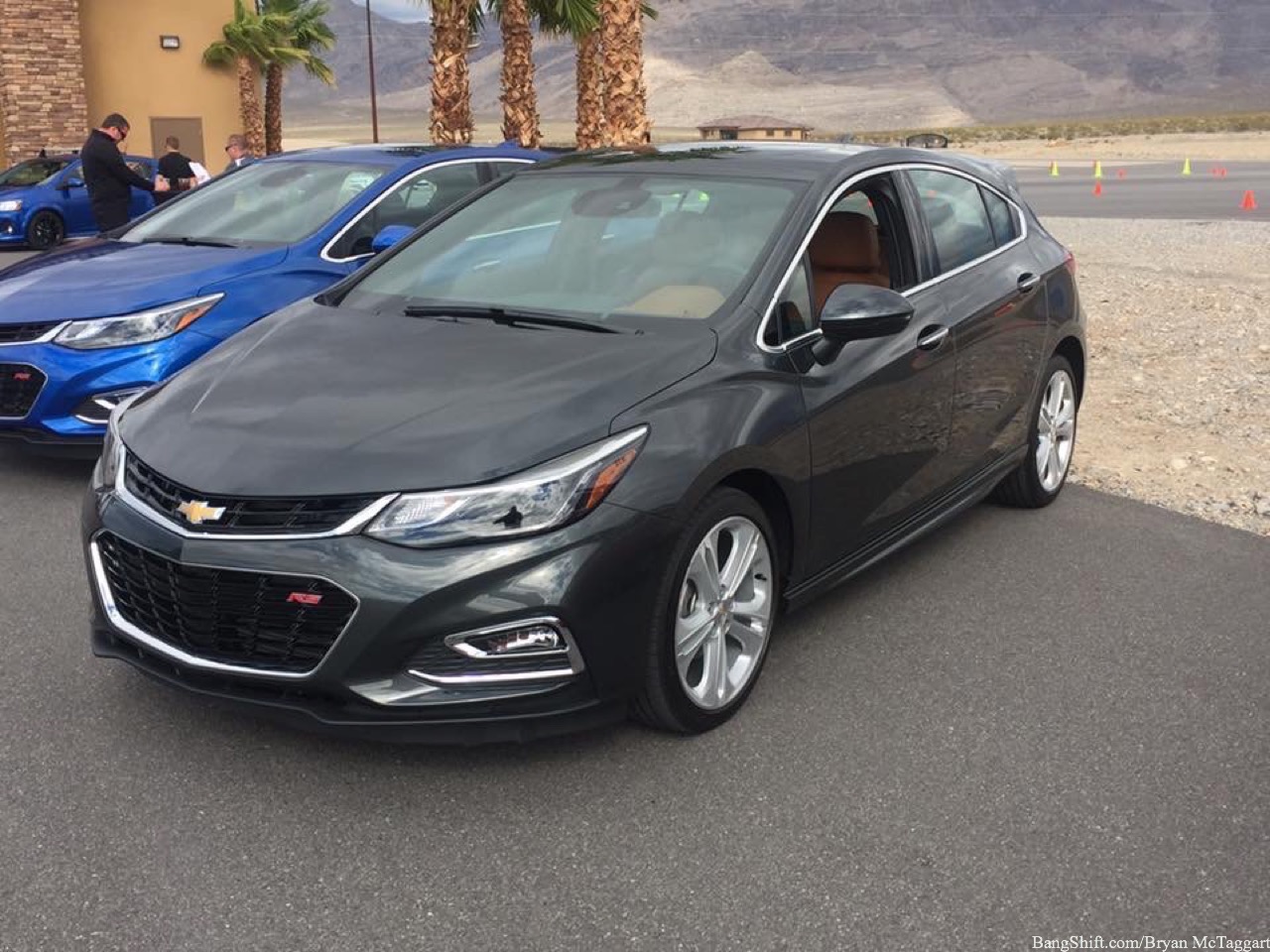 SEMA is kicking off in Las Vegas and I’m about sixty miles away in Pahrump, Nevada. What am I doing out here, you ask? Chevrolet has invited a bunch of people out to…well, at the time I’m writing this, all I can say is that we are having a bit of fun. I promise I’ll be more clear about that once I am allowed to be. But that fun is happening on Monday morning, as you are reading this. I flew in Sunday…just what have I been up to? Besides briefings and presentations, we started the two-day jaunt in the middle of nowhere with a chance to drive the newest variant of one of Chevrolet’s more bread-and-butter cars, the Cruze. For 2017 the Cruze gains a five-door hatchback model on top of last year’s refresh, and Chevy was keen on having us take a spin in one to see what we thought. Because it’s me, I gravitated straight to one of the “RS” badged models, hoping that there would be some semblance of sport to ease the gearhead side of me that was staring lustily at the Camaros, Corvettes and ATS-Vs that surround Spring Mountain Motorsports Park. Let’s take a look at the Cruze not as a hot rod or a factory sleeper, but as it is: 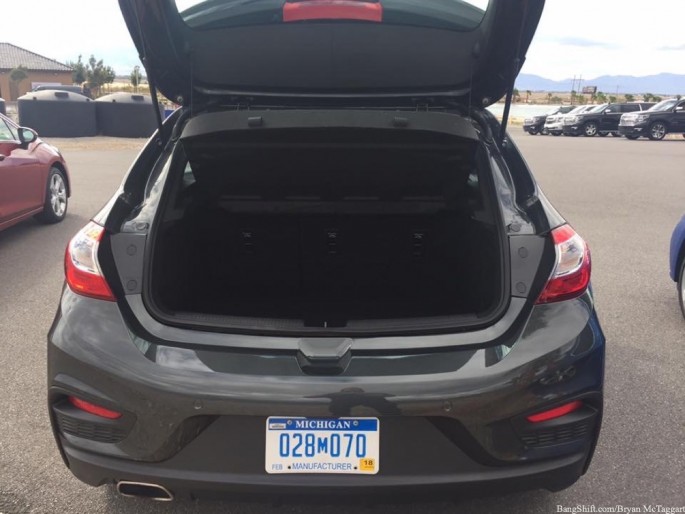 Off of the bat, I have to push past my normal distaste for hatchbacks. I didn’t like them in the 1980s, and I still don’t appreciate them now. But it’s not a crossover, not a cute-ute, and in my eyes and opinion, that means quite a bit. The Cruze is actually a handsome little beast, with a lot of the current-generation Malibu bleeding through in styling. With the RS nose cone and light treatment, it looks relatively upmarket…compared, the standard nose is plain and you do get a whiff of “rental-spec”. I am surprised at how small the 18″ wheels look on a car this small, but once inside of the car, it makes sense. The hatchback shape is truncated and smart, but with the cargo cover, doesn’t present much more space than you would expect a sedan’s trunk to be. With the cargo cover removed and the rear seats folded down, however, things do become clearer. 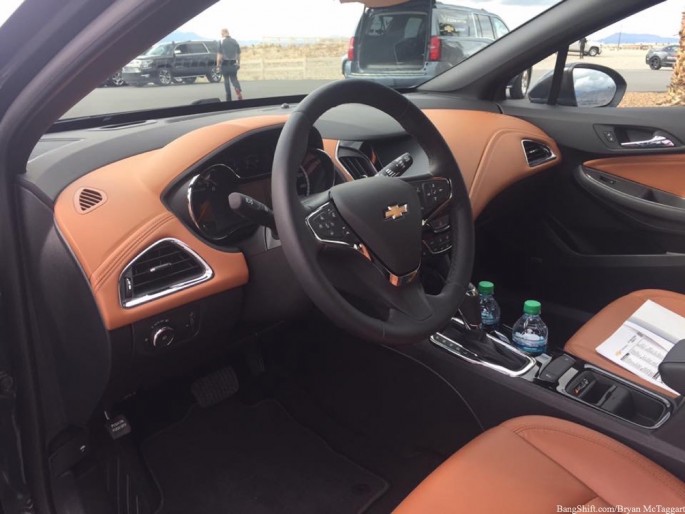 The interior of the Cruze is a very nice place to be, period…no “for a small car” here, because frankly, it’s not needed. The materials are nice, the overall quality is on-par with the nicest Chevrolets I’ve driven recently (SS sedan and Corvette Stingray) and every hard switch feels nicely weighted. The seats are pleasant, though I’m sorry to say I cannot give an accurate analysis of comfort after four hours in a 737 prior to testing, and if you have any thoughts about small-car feel…don’t. With the seat all the way back, I was at full leg extension and arm extension. I only needed half-travel. Whoever designed the ergonomics of the interior, I applaud you.

That being said…whoever designed the electronics interface needs to understand that not everybody is up on the whole idea of the “connected car”. I would need about two hours’ worth of study time before I was ready to do anything except turn on the radio in the MyLink audio setup, would have to remind myself that the phone-holding and charging slot isn’t for coins (which there are plenty of warning labels about) and the steering wheel has more buttons and controls than any car needs, ever. And that’s before the car’s wi-fi comes online. And we still haven’t touched 90% of the car’s other electronic features because honestly, if you read these words, you can decide if you want them or not. Lane warning assist, blind spot assist, and Chevrolet’s “Teen Driver” features are all on you.

With a 1.4L turbocharged four-banger and a six-speed automatic, performance driving should be an afterthought. Actually, no, it shouldn’t be a thought. You don’t buy a Chevrolet Cruze as a performance car, you buy it as a daily. It’s packing 153 horsepower and 177 ft/lbs of torque, so you’re in 1980’s V8 territory. Don’t freak out. So, how did it hold up on a 20-mile loop test around Pahrump? The four-cylinder is adequate and, when booted, will hustle the Cruze without making you panic over traffic, and the six-speed auto works fine on it’s own merits. (Don’t bother with the manual-shift button, it’s not worth it.) With my heavy-ass foot operating the long pedal on the right, the car indicated 34.8 MPG on the loop….respectable considering that I wasn’t that gentle. But one thing, above all others, marred the experience for me: the start-stop feature. If you come to a complete stop and sit for more than a second or two, the engine shuts down, and comes back to life when you take your foot off of the brake pedal. It may be my opinion, but here it is: I hate that feature. More often than not, my foot was faster than the starter motor, resulting in jerky take-offs. Luckily, there is a way around that: the Cruze is available with a six-speed manual transmission, which not only deletes the start-stop function, but should make driving the car more enjoyable anyways.

The standard base price for a 2017 Cruze Hatchback Premier 1SF is $23,945. The Maroney sticker on the RS package car we drove, complete with it’s overabundance of connectivity features and top-trim, came out to $29,465. Here’s what made up the gap: The “sun and sound w/navigation” package (sunroof, MyLink system, Bose speakers and the instrument package with the display ticked the box at $1,995. The RS body kit, with wheels, foglights and the 18″ wheels added $995. The “enhanced convenience package”, which brought in power windows with auto up/down for the driver, automatic air conditioning, auto-dimming rearview mirror, wireless device charging, 110-volt power outlets and heated seats was $865, and the Driver’s Confidence II Package, which added intelligent headlights with auto-highbeam, rear park assist, following distance indicator, rear cross-traffic alert, forward collision alert, lane keep assist and blind spot monitoring with alert added $790.

The Cruze is a decent little car. The interior makes it feel upscale and the looks follow nicely. The engine is what it is, nothing special but it gets the job done. We’d highly suggest working the options box over to get the best deal, and we encourage you to skip the automatic for the six-speed if at all possible. 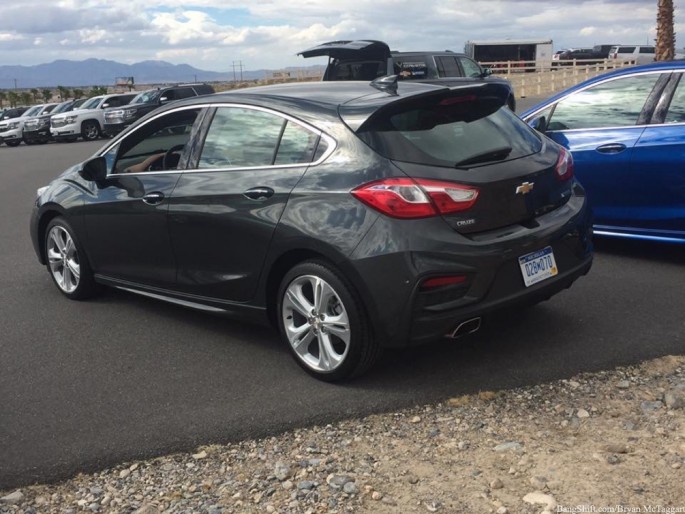 Project Angry Grandpa: Our First Test With The New Setup At Beech Bend - How Close Are We To The 12-Second Goal? You Just Might Need This 4x4 Pacer In Your Life