Random Car Review: It’s A Car Up Front, An RV In The Back, And It Doesn’t Look Like An Aztek…It’s The 1972 Toyota RV-2 Concept

Saying “Toyota RV” conjures up images of one of those tiny little Hilux-based cube vans, doesn’t it? You know the ones, it’s half Toyota 2wd truck up front, and one huge box in the back, and none of it seems to go really well together. Something to avoid, right? It’s like a Fisher Price “My First Meth Lab” truck, but with less power than you expected. There’s nothing personal against Toyota trucks…they are stout vehicles that helped solidify Toyota’s spot in the U.S. market. But those RV’s were just a bad idea that somehow got green-lit.

In the early 1970s, however, Toyota was messing around with an entirely different type of RV. Using the Toyota Crown sedan, the car was converted into a two-door wagon of sorts (think a panel utility with windows, or for our Aussie friends, a Toyota version of the Holden Sandman). Completed and shown off in 1972, the 2.6L straight-six powered RV-2 was a pretty decent looker, and Toyota was seriously shopping this car as a potential production piece. It even had a tent integrated into the back, so that when you parked, you opened up the sides of the rear section of the car, laid down the tailgate and ended up with a mini-RV that looked ten times cooler than anything else at the beach. 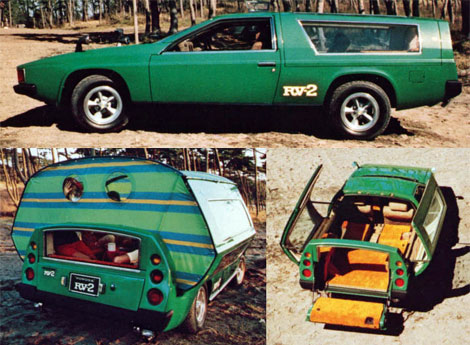 While there are elements that certainly are concept-only, there’s still a lot going on for the RV-2 that could be production ready…so why did it not make it into production? That’s anyone’s guess,  but it wasn’t due to Toyota’s efforts, that’s for sure. Most of the pictures that I found while researching this car involved topless women somewhere in, on or near the RV-2, as well as many shots of it’s versatility. Unfortunately, things didn’t work out and instead we got the 1982 Toyota Tercel 4wd wagon instead. Shame. 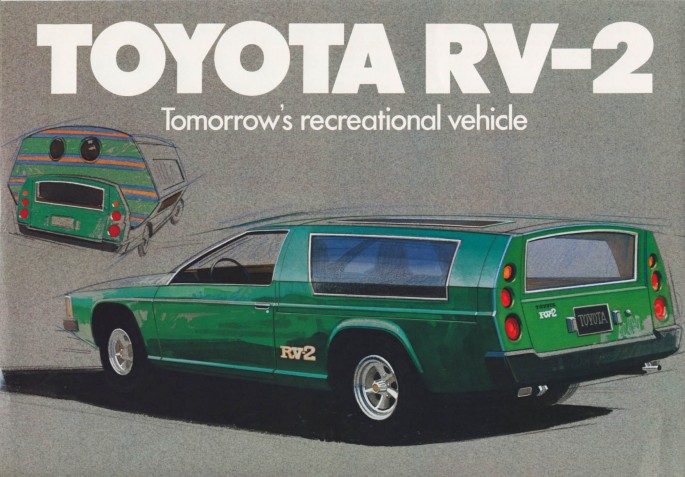 Epic Win: How A Lowly Midget Race Car Beat The Best Sports Cars In The World At A Wild Race In 1959 Unhinged: The IIHS, Scare Tactics, And Automatic Emergency Braking

One thought on “Random Car Review: It’s A Car Up Front, An RV In The Back, And It Doesn’t Look Like An Aztek…It’s The 1972 Toyota RV-2 Concept”