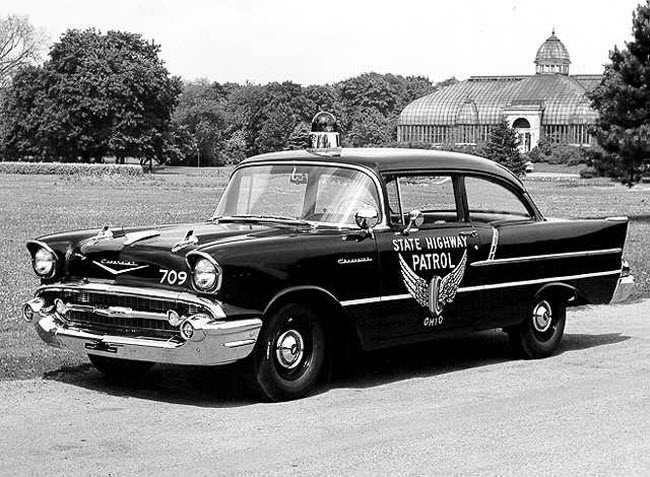 I don’t know what it is, but I have a serious thing for vintage photos of cop cars in action. I get some special thrill seeing cars you normally see in car shows going about their daily business in their professional livery. Maybe it’s because I had so many of them in the rear view mirror over the years, I never got a good look at them in the daylight. Whatever the reason, it’s awesome to see how police cars changed over the years, from just a black sedan with a star on the door to purpose-built machines with some of the best equipment money could buy: 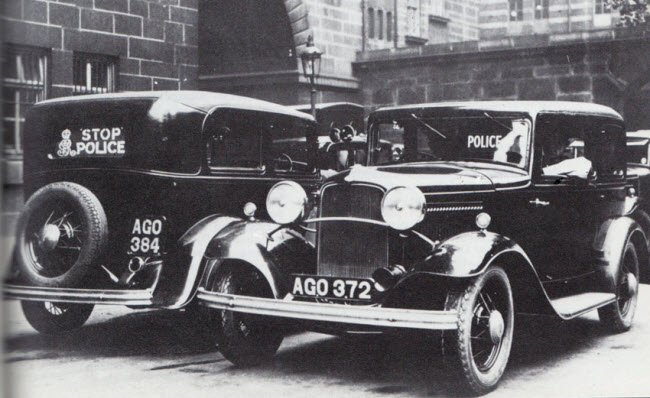 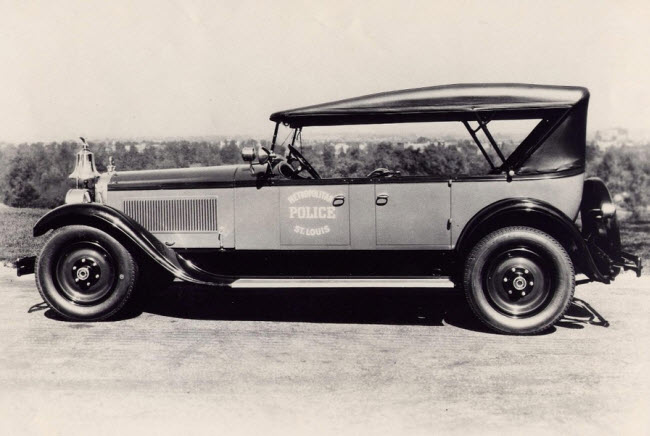 Apparently, in 1923 or 1924, the city of St. Louis, Missouri must’ve had a few extra bucks in the municipal fund and managed to swing a Packard 2-43 Seven Passenger Touring. That’s like the Chicago PD going out to buy a Bentley today.  Equipment included a red light, a spot lamp and a giant bell that looks like it came off a steam ship.

These Ford Model B Police Cars were from Dagenham, England, and were apparently amongst the last Model Bs to roll off the line. 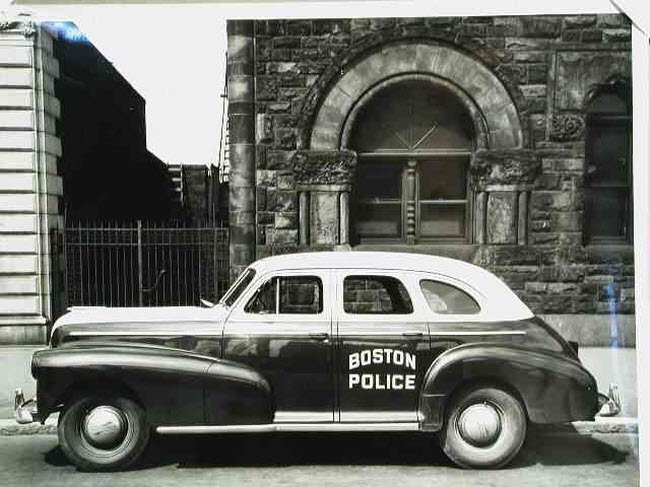 This 1946 Ford cruiser is obviously from the city of Boston. You get a good idea of the kind of specialized equipment police departments had in the 1940s, which mostly consisted of a bucket of white paint and a guy that could hand-letter words on the side of the car. 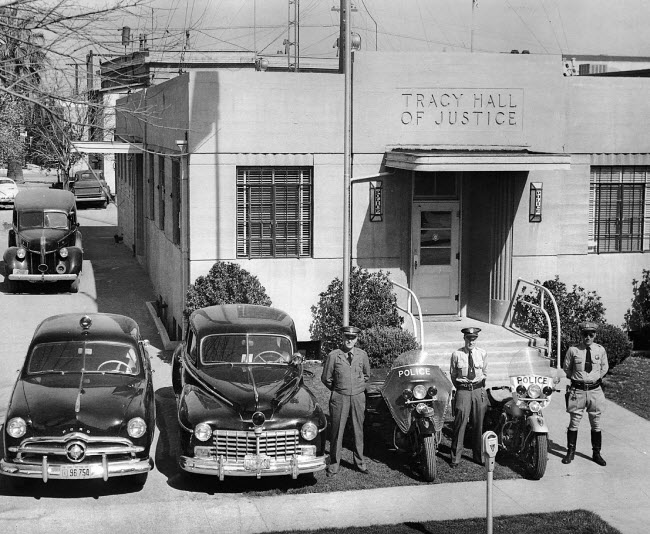 This photo comes from Tracy, California, a city in San Joaquin County near Stockton. It shows the Hall of Justice in about 1950, with a 1950 Ford, a 1947-ish Dodge, and two motor patrol officers and their Indian steeds. At the time, Indian was churning out way more municipal motorcycles than Harley-Davidson was, and the Chief was the preferred model for law enforcement.

This 1957 Chevrolet 150 two-door sedan was in use by the Ohio State Patrol, and looks awesome in jet black with poverty caps. There’s something in place of the hood bird on this one. It looks almost like the “hailer” that the Michigan State Police cars are required to display, but maybe someone either from Ohio or with better eyes can figure that out. 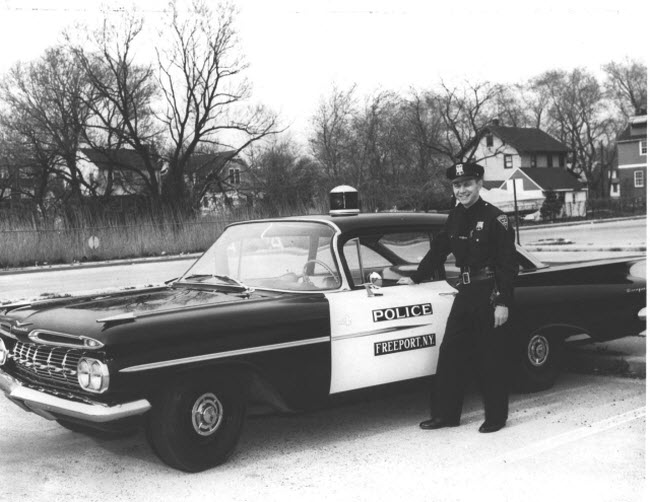 Love the look of this brand-new 1959 Chevy Biscayne highway interceptor, too, chasing down speeders in Freeport, New York. 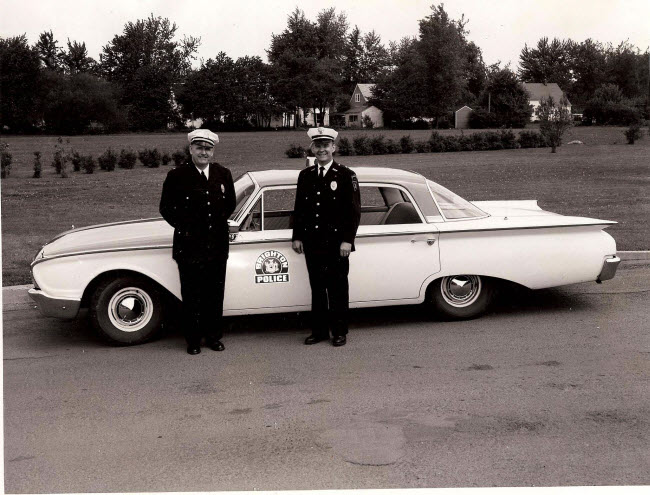 Check out this 1960 Ford Galaxie out of Brighton, New York. The 1960 and 1961 Galaxie bodystyle was the coolest. You occasionally see these in sedan form like this one, and rarely in the two-door hardtop version used as pursuit cars. 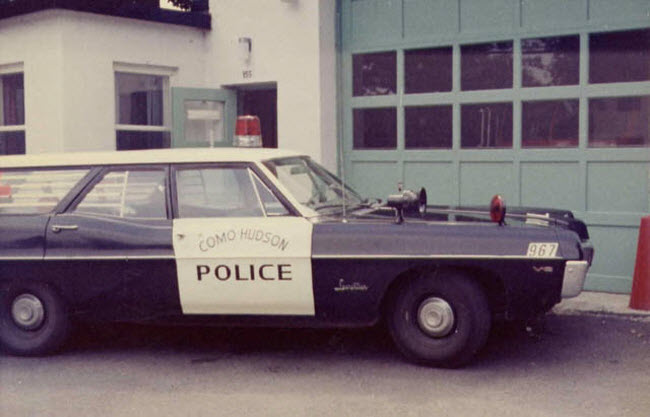 The police station wagon is something you just don’t see anymore. You didn’t see them much in the 1960s and 1970s, either, and you certainly didn’t see them like this Pontiac Laurentian — analogous to our Bonneville — used in by the Hudson Village Police Department in Quebec. 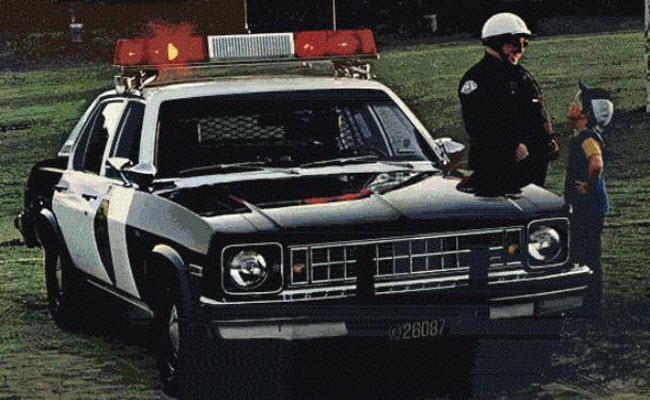 Things got weird in the mid-1970s, when police departments started downsizing to Darts and Novas. Also worth noting that this officer was afraid he was going to get his head bashed in by the troublemaker in the baseball cap. It’s also when you started to see bubblegum machine emergency beacons give way to enormous light bars. 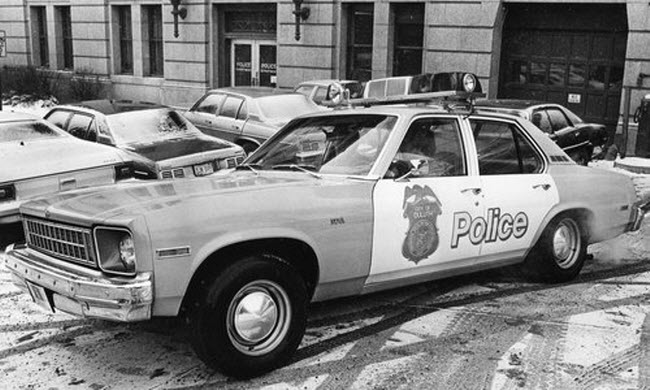 As goofy as they look, we’ve heard that these Nova 9C1 cars were actually pretty prized by a lot of cops who drove them. They featured a relatively unrestricted 350 with a four-barrel, a 3.08 axle, F41 suspension, a padded Camaro-style steering wheel, a rear anti-roll bar, a 120mph speedo and heavy duty brakes with semi-metallic linings. This example was on duty in Duluth, Minnesota. 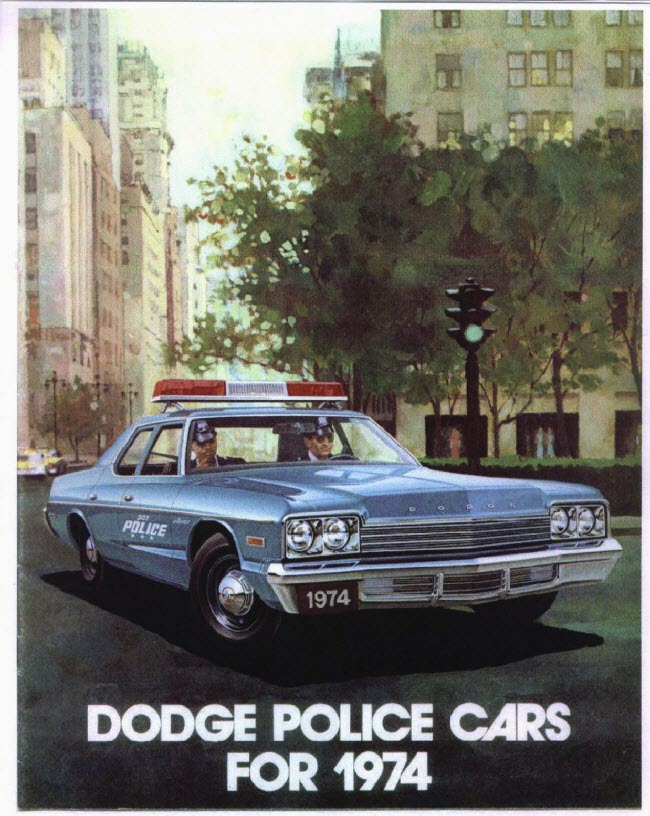 Then, of course, there was everyone’s favorite 1970s cop car, the 1974 Plymouth Fury. We’ll let you look for Bluesmobile photos and use this awesome brochure cover instead, showing what these cars looked like before hitting the Mount Prospect Police Auction. 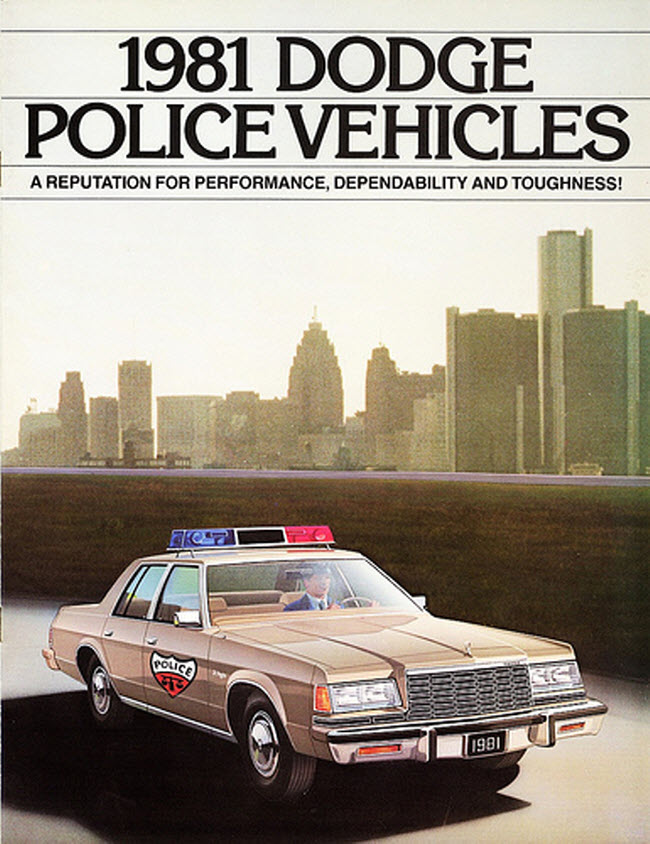 For the most part, the 1980s were when the 9C1 Caprices and P71 Crown Vics became the ubiquitous police cars in the United States, but there were a few exceptions. The major one was the R-Body Dodge St. Regis, which is still one of the coolest cop cars ever. 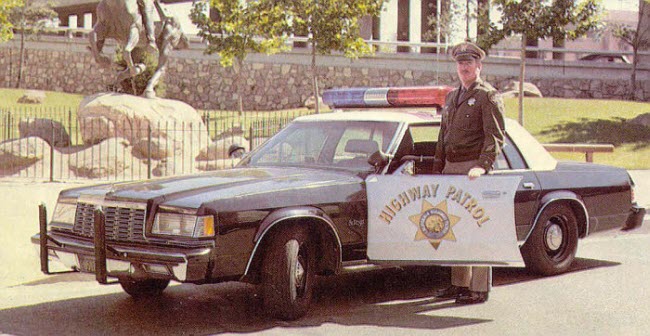