WTF! I Hate People That Put Ads Like This Up On Craigslist! 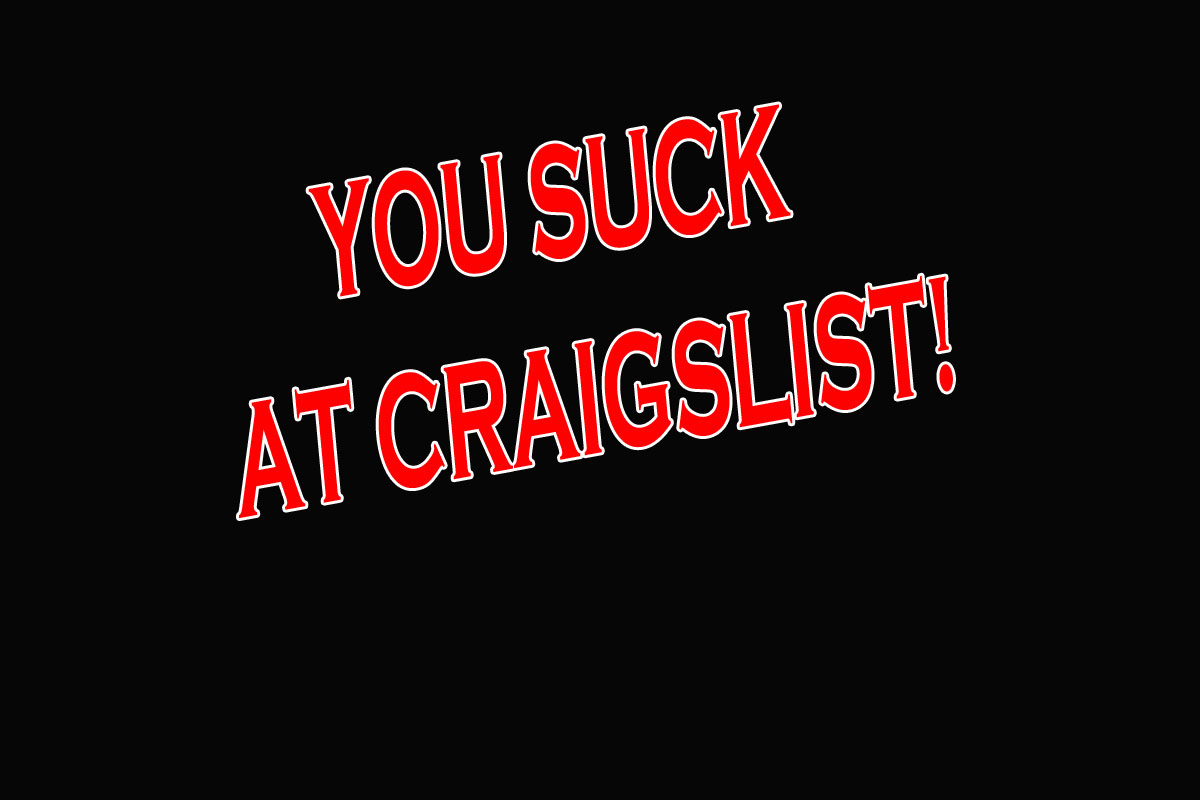 If any of you ever have listened to an Earl Pitts rant on the radio, then think of me as the younger, more hot rod centric version.

You know what makes me go “WTF?!” What ads piss me off so much that I just want to walk out into the shop and hit my own thumb with a ball peen hammer? Repeatedly. Stupid ass people that post stupid ass ads on Craigslist for things they pretend to want to sell but aren’t actually interested in selling, that’s what.

If I won the lottery I would devote at least a few hours per month answering these Craigslist and eBay ads and going out and waisting the sellers time acting like I wanted their crap. I’m poor, so I won’t, but if I had money, I would. Stupid bastards.

Here is an example of the ad that pisses me off. This one is on Craigslist right now in SoCal and is advertising what on the surface could be a cool car based on what make and model it is, not the ad posted.  I have no idea what the one in this particular Craigslist ad looks like since the idiot didn’t put a picture up.

Here is the complete ad. I’ll bitch more after you read it. 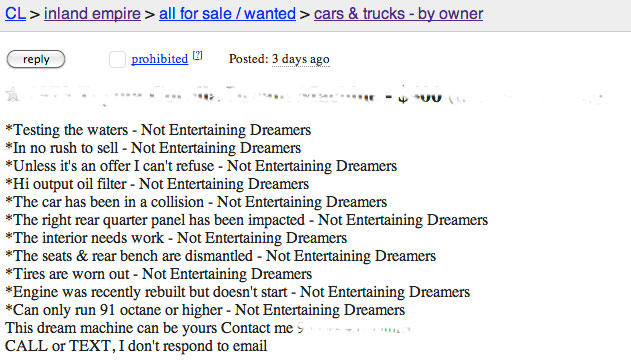 Testing the waters? Really? WTF! Grow a pair and either sell your shit or keep it! We don’t care, that’s up to you. Testing the waters. My god that’s the stupidest thing you can ever say when selling something. As a guy who sells a lot, I can tell you that nothing in the world would make me happier than to bone this guy for the craziest deal ever and actually have him thank me for taking this car off his hands. Dude, come on!

No rush? Really? I would have never guessed! The incredible creativity and sales acumen you have used in your ad clearly says otherwise!

It’s been in a collision and the right rear quarter panel has been impacted. Hmmm. PICTURES!!!!!

The interior needs work, and the seats and rear bench are dismantled is the first clear and concise thing in this ad. Kudos to you dude, you got two lines right!

Tires are worn out. Way to go dude. You give us no details on your car and then the ones you do give are the ones that make everyone not want it. I’m going to give you a sales lesson here in a minute. I hope you are reading.

The fact that the engine doesn’t start sucks, but may not be the end of the world. The fact that it has to have premium in it sucks for most folks but makes a car guy drool. So take advantage of that! Write it like you care and want to sell it!

If you can find Craigslist, you can also use Google. Here is what you search if you want to know how to post a Craigslist ad to sell your car, dog, wife, whatever. How to post an ad on Craigslist  That’s it. Super easy. Put that in the search window on Google and you get a jillion different ways to learn how. First is the one from Craigslist that walks you through it like you are a 75 year old stoned hippy with the IQ of a Beagle. If you aren’t much for reading, there are about a jillion videos on the subject as well, because clearly a million of them wasn’t enough.

Here is the ad I would have put up if I were this dude. I’m going to use a 1973 Camaro as my example.

The Camaro’s body is rust free and straight except for the right rear quarter panel which was hit by my grandma when she pulled in for Easter Sunday dinner. It is fixable, and will not require a new quarter panel. I have received estimates of $800 to fix the quarter panel and have it ready for paint.

The wiring in this car is good, as is all the plumbing, suspension, etc. The interior is it’s weakest feature, but the bones are there and good. With a new foam and seat covers kit, along with a new headliner and door panels, this car can be very nice inside.

Well worth the asking price, as I have more than that in the engine and other parts. It’s a great deal for a rust free 1973 Camaro and will make a great project for someone. Fathers and sons should grab this one and make a cool hot rod out of it. I won’t give it away, so please be serious if you come to look at it. Phone calls are free. Text, call or email works to reach me, whichever you prefer. Chad: 214.876.4316  [email protected]

There are 6 photos in this ad, I have more available via text or email if you need them.

Was that really that hard? It could be done in bullet points too, but make the things positive? Anyone want to buy my imaginary 1973 Camaro? I’ll cut you a great deal.

Now that I’m done ranting, please help us help the world by getting rid of crappy Craigslist ads. You can do it! And if you are about to put an ad up on Craigslist, and want it reviewed by the experts here at BangShift.com, just email me the copy and I’ll give you my opinion. Hell, write up a funny one we can post and I just might send you some BS schwag.

17 thoughts on “WTF! I Hate People That Put Ads Like This Up On Craigslist!”