Rough Start: Add An Extra Grand To The Budget For This Ballsy Dakota R/T! 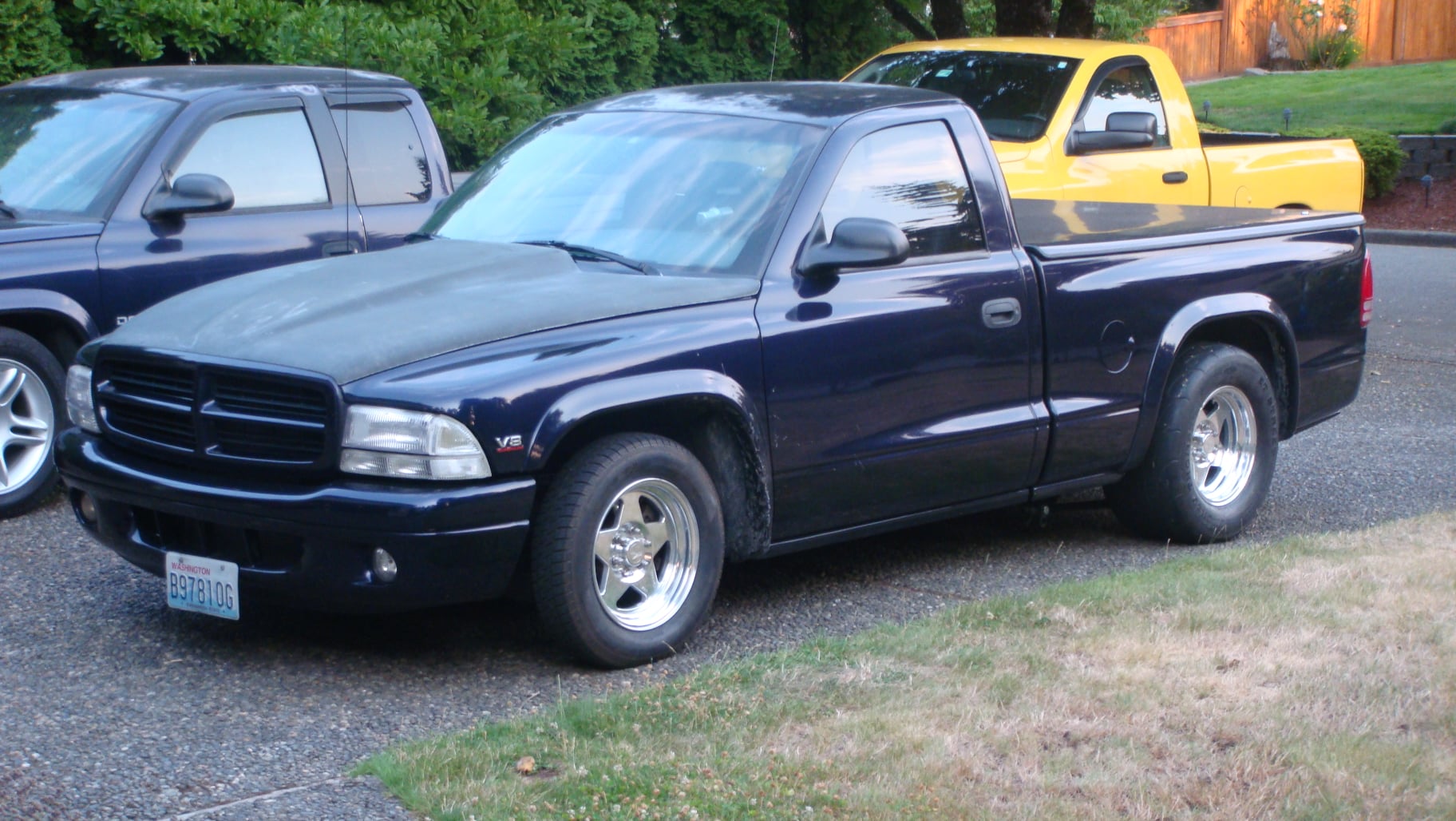 Whenever I go daydream project hunting in areas of the Pacific Northwest, I try to keep an eye out for vehicles that I might have known. A Chevelle here, a Cutlass there, or maybe something that I tangled with on one of my more adventurous drives when I was on my own free time. There is a pretty solid group of hardcores running around the SeaTac region alone, and I might have made a few friends and a rival or two during my years roaming the I-5 corridor and surrounding areas. I don’t think that I ever met this Dakota R/T, but that doesn’t mean I won’t check it out. The 1997-2000 Dakota R/T was a strange but welcome performance bit from Ma Mopar…take the Magnum 5.9L V8 (read: 360ci small block) and cram it into the Dakota, and make sure that the buyer understands that rear tires are wear items and not a warrantied part. Burnouts for days, kids, even in stock form. This one ain’t stock, but it’s got bang for the buck, which is why I’m opting to ignore the $5,000 budget for the Rough Start program here. Read more below: 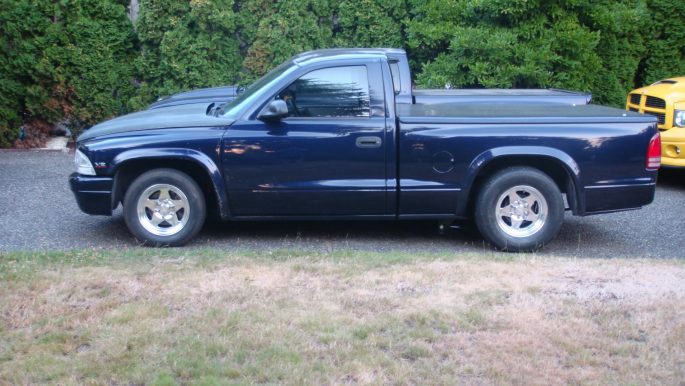 As most of you know, Josh Klein built this truck out of the remnants of his blue MADRT that we totaled. Truck is a 1 of 159 or so 99 Deep Amethyst regular cab. Midwest truck until it came to the Seattle area in 02 or 03. Had 110k on it then. Now has 117k almost 20 years later. So not driven a ton. This truck is HEAVILY modified, and is very suitable for a conversion to a full time drag vehicle, or just made into a hell of a street/strip bruiser, which is where I wanted to go with it. 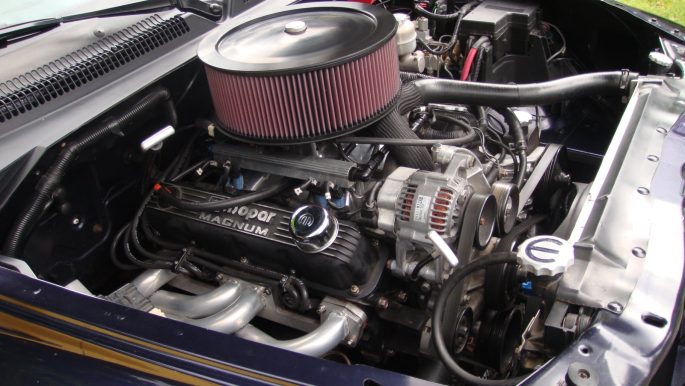 Mods list. Hang on to your panties…. probably easier to tell what IS still stock. lol
Motor:
Magnum block .030 over
1971 360 X crank that has been knife-edged and shot-peened, index ground etc. I have about 50 hours into the crank alone
Scat I beam rods
JE flat top pistons
Calculates out at about 11.2:1. Runs fine on pump super.
Neutral Balanced
Total Seal ring with a light oil ring. This is important to know, as it will allow some smoke to get past the rings on WOT. This was setup to be a max effort NA motor, so low friction/weight was the consideration at the time of the build.
Motor currently has a 210x Comp Cam in it, 210/220 .545″ on a 108 lsa
Crower 1.7’s.
M1 2bbl
F&B 58 IIRC, could be a 55.
24# FMS injectors
GSM no leak ( Oring version ) rails. Would replace hose on them because of age.
SE Performance Van ported 2.02″ R/T Heads. These will be near or over 300 cfm on a flow bench easily. Some of the nicest heads Ive seen. And I had another set of RT heads that went 306 on the flow bench ( different porter ) For those that don’t know, Van was an ex NASCAR engine guy. Tons of experience porting. I didn’t like SE Performance, but Van knew his shit.
Trans is a non lockup A518. So no electronic shift/lockup/OD.
2800 or so convertor in it. Uses a standard 727 style convertor.
Custom built aluminum driveshaft for RC’s
4.56 Detroit Locker rear with a Cast alum rear cover and cap support.
Caltrac mono leaf rear springs, with modified front hangers for more angle/bite. This thing will almost dead hook on the street, which given the motor is pretty impressive.
Front coils are actually out of a GM X Body, but this thing nose lifts and plants the rear so hard on hit its not even funny. Spring rate was worked out extensively based on truck weight etc to provide optimum lift. Even on light accel you can feel the whole nose lifting. It takes a little getting used too. But this is a hell of a launch drag setup.
Spintech mids into a custom 3″ X style exhaust that is equal length, into a Dual in out Flowmaster 5″ muffler and dumps under the truck.
B&M shifter inside for trans control. Switch on the dash for OD engage.
Wideband O2 setup for keeping track
Custom B&G flash for no auto trans. Also has old style Apexi fuel trim controller in it. This truck really needs a modern Holley Sniper or Dominator EFI controller at this point.
Trans cooler relocated to under bed with a fan mounted on it
Battery relocated to bed with remote shutoff in rollpan
Gen1 Viper seats
Darren Alcorn leather door inserts.
Super low profile over the rail tonneau. I usually hate this style, but this one is super low and clean, so it looks good, and it water proof.
Bedrug that is showing its age a bit lol.
Clear corners
Has the pinchweld covers painted and installed
Oh, how could I forget, 1 of 10 built Carbon Cowls. Not true carbon fiber, but still lighter than the stock hood, and much cleaner profile wise with no hood emblem indent.
And truck comes with another 1 of none set of original Street Bogart rims with billet center caps. This was Jody Fryers old setup. 15×10 on back 15×4 on front.
With some RT 20’s and me in the truck it weighed 3410 on a CAT scale. In race trim you could knock that back by at least 200 lbs, if not 250. And Im over 300 myself. So theoretically you could, in race trim, be at 3k weight in this truck. Not bad for a full frame vehicle. 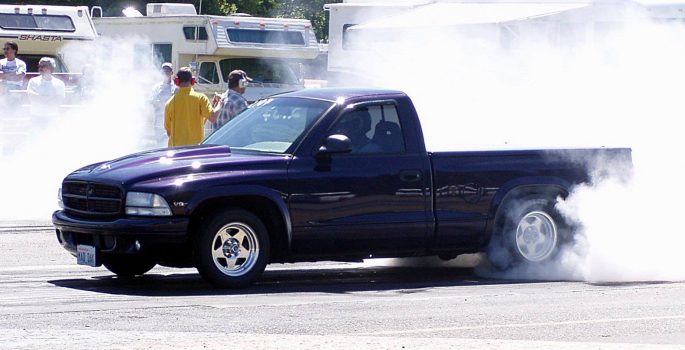 Video of truck startup and idling. Smoke is supposed to be there as stated.. lol Again pardon the fat guy mouth breathing, some things cant be helped lol
https://www.youtube.com/watch?v=myClL1HHLwQ&t=3s

The bad.
Clearcoat rot gone wild. Truck needs a respray. Or a top wrap. Either way, its just typical Dodge clear coat issues on a dark color.
Trans, it needs one. No questions asked. Price reflects this. I would go with John Cope and get one of his full tilt A518’s with a trans brake and OD/Lockup on the shifter setup. Spendy, but oh so nice especially behind this motor. Truck will move under its own power, but I would NOT drive it. Itll get onto a trailer, that’s about as far as Id trust it at this point.
I would probably re-ring this motor just to get the smoke gone. If it was to be a full race setup then it wouldn’t be an issue, but if you spray it because of no jet ports in the pistons, oil gets past the rings badly. If you want to stay NA and drag race it, its fine as is. Hundreds more passes in the motor
Needs a new MSD Digital 6 installed. The Apexi controller relied on that for fueling metering at low RPM, so right now with no MSD box, its pig rich down below 2000 rpm. Cleans right up above it.
No sway bars. Drag truck

Asking price $6,000 including extras. Extras below. Full price = you get all the extras. Dicker down too far and extras get sold off individually

I have a brand new Indy 4bbl magnum intake already ported to magnum heads. Just needs to have injector rails drilled. Universal 4bbl will bolt on. Will include Dominator adaptor so BIG cfm TB’s can be utilized.
Pile of cams, including the big one that was in this truck when it went 11.50’s NA when Josh was racing it.
Fresh PTC 4k 727 convertor with modified flexplate to fit convertor.
Aeromotive A1000 return Fuel system. New pump, filter, regulator, fittings and almost all lines needed. Fuel cell would be the only thing left to get to make a complete full return setup for the truck. 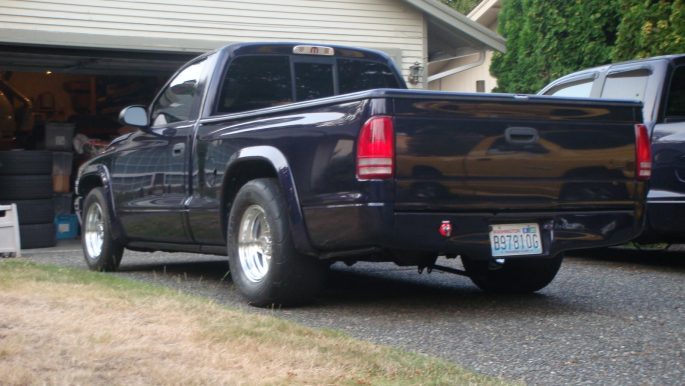 2020 Southeastern Chevy/GMC Truck Nationals: Bring Out Your Bowties! We Offer You One For The Weekend: Which One Of These Boats Do You Choose For A Weekend On The Lake?

3 thoughts on “Rough Start: Add An Extra Grand To The Budget For This Ballsy Dakota R/T!”