Are Custom Vans Back? Check Out The Ones We’ve Found On Ebay And Be The Judge! 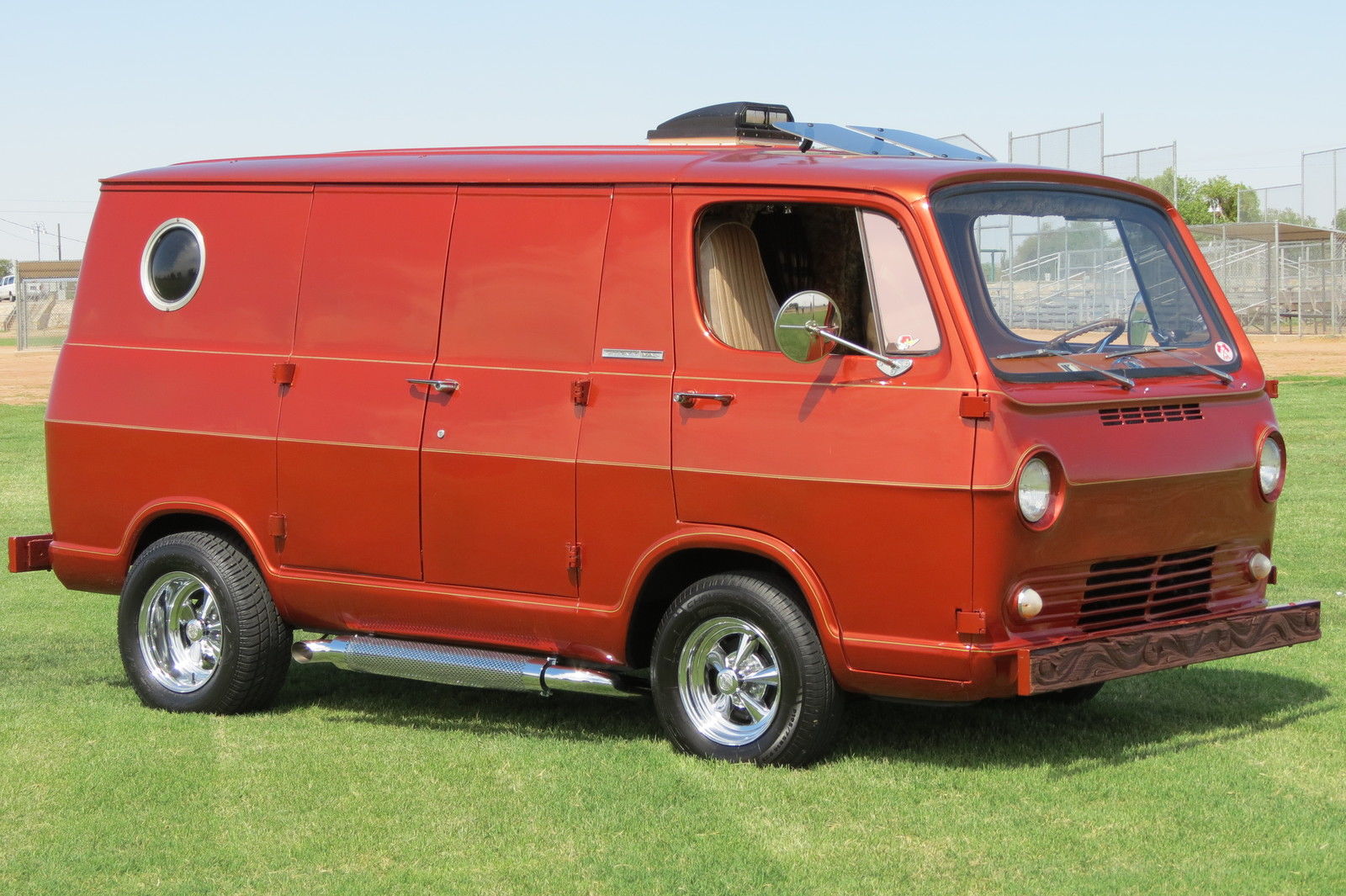 I don’t know what it is about them, and I know I’m not alone here at BangShift in thinking this (or maybe I am, who knows!), but I’ve always been fascinated with the 70’s custom van craze! We all know the story: when the decline in factory built muscle, the rise of insurance rates, coinciding with the OPEC-fueled gas crisis of the early 1970’s, many people began finding other ways to get entertainment from four wheeled things. One of these ways was to build a bitchin’ custom van. There was an entire culture that came with that decision, and for a brief period in the mid-70’s, there were “Van-In’s” all over the place and van culture flourished. Then, at some point, it became uncool and trends moved forward. As time marched on, custom vans have become the butt of many gearhead jokes, as well as in popular culture.

As a kid growing up in the late 80’s and 90’s, I always thought these vans were cool. I cited The A-Team’s GMC van as well as the Teenage Mutant Ninja Turtles’ Party Wagon as the correct way to have a sweet custom van, and I remember a few 70’s derelicts that used to roll around town, like the all black 70’s Chevy Van with skulls and crossbones on the rear doors, right under the sweet louvered windows. I also remember hearing the Stoner Rock band Fu Manchu for the first time, and having bought their album King of the Road solely on the album cover alone. People still thought these were cool? Was it OK to ever think that custom vans were cool? 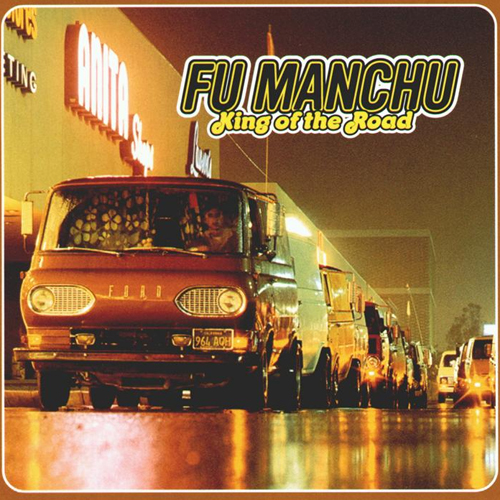 Anyway… as you can see, I’ve always had an eye on the Custom Van movement. There have been flashes of it “coming back” in the past 10 years or so, and I’ve read other publications in the past 10 years that have claimed it to be “back”, but it would fizzle away quickly. In the past year or so, I have not only seen multiple “survivor” vans posted up on websites such as eBay and Hemmings, but I have also seen (and joined) a few interest groups on social media that cater to the Custom Van culture that didn’t exist a short time ago. And those dudes are dead serious about vans! But the real indicator is the multiple eBay auctions listed in the past year or so for old customized vans, and they are getting some real attention and selling for real money. Let’s have a look at four different vans that have been on eBay in the past week alone: 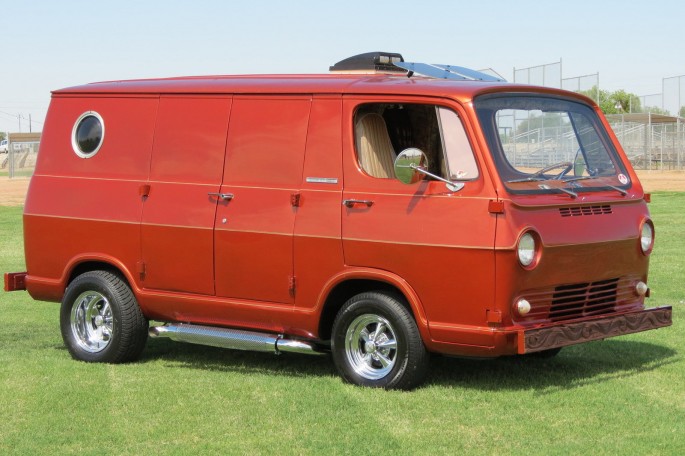 Here’s a 1965 Chevy van that just sold for $13,500. It’s super clean on the outside, with some classic 70’s mods: big and little Cragars, side pipes, a pop-up sunroof, and of course, the requisite porthole window. 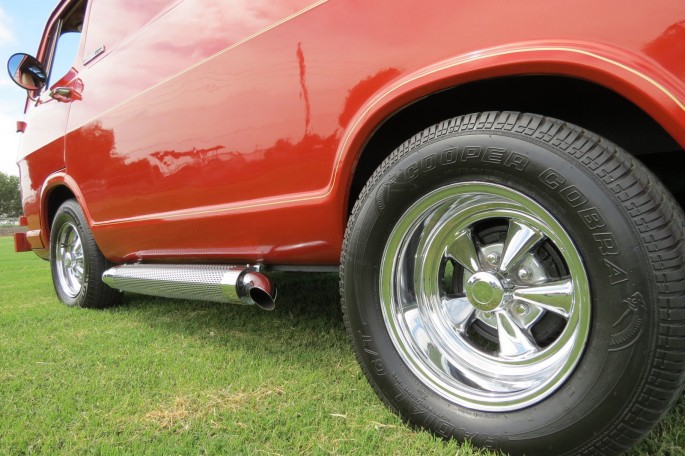 Now THAT is how you do stance, kids. 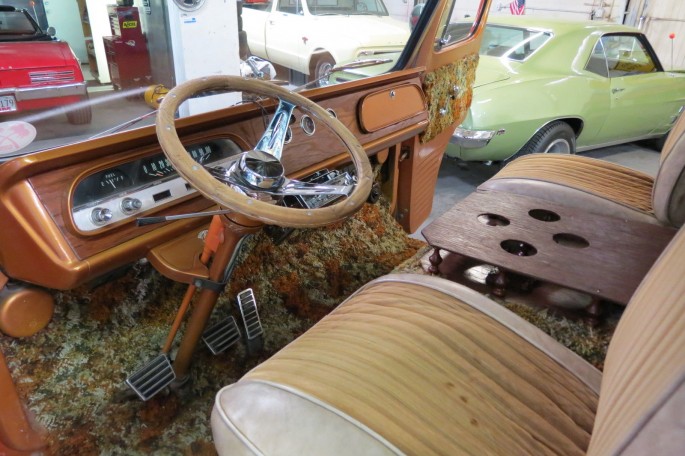 Stepping inside, things start to get funky. Yes, it has THREE pedals! This one is powered by a Chevy I6 and three-on-the-tree for extra awesomeness. 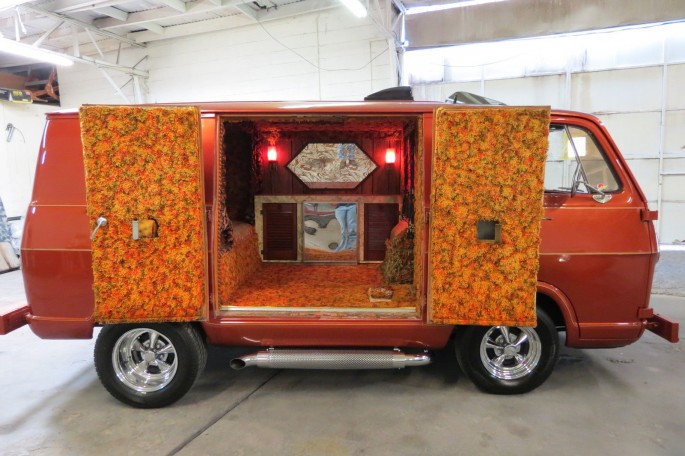 That clean exterior gives way to this madness… It’s gonna get weird! 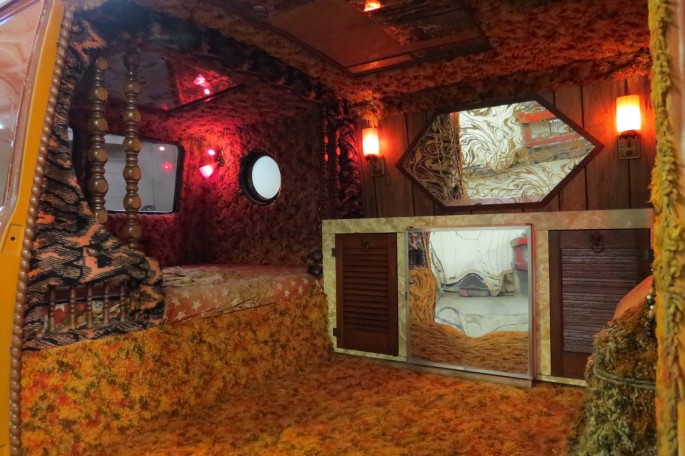 This is what one would expect to see inside of a true 70’s custom van. It’s equal parts brothel and your parents’ basement circa 1978. 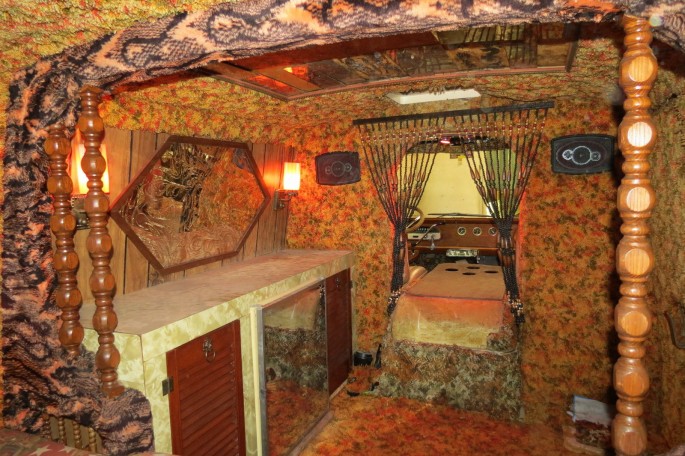 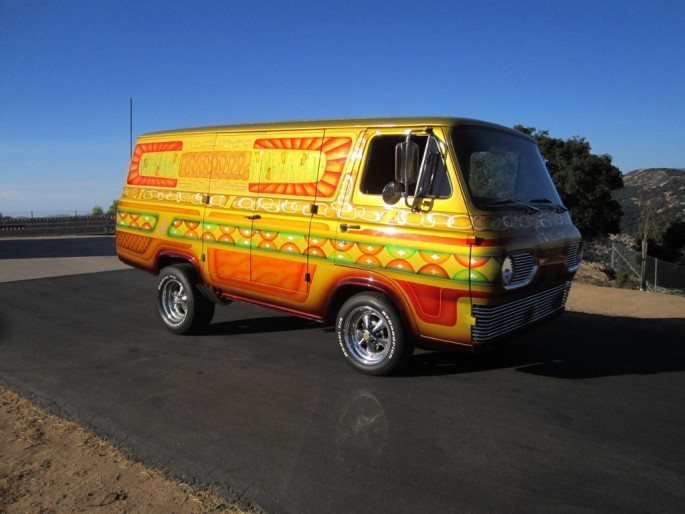 Here’s another van, a 1966 Ford Econoline, that’s currently going for $18k! This one is really special. The paint on it is crazy cool, and the stinkbug stance with the up-turned side pipes is just awesome. 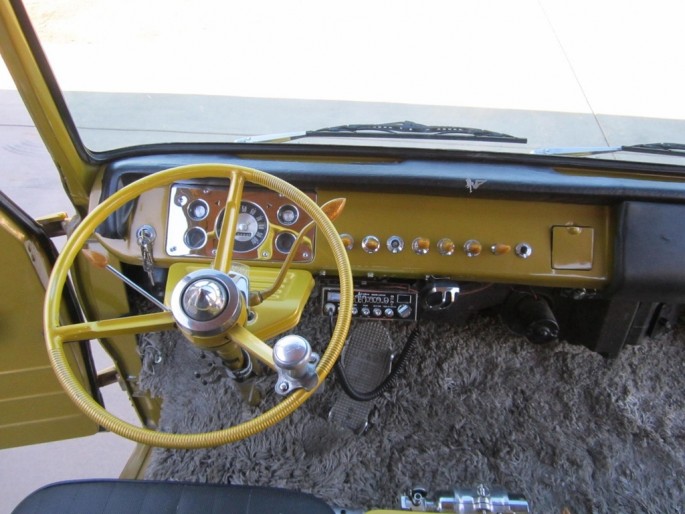 The rear cargo area is still a work in progress, but the front is looking good. This one has the suicide knob on the steering wheel, a vintage CB, shag carpeting, and what I think is possibly the foot platform of an old bass drum pedal serving as the gas pedal. 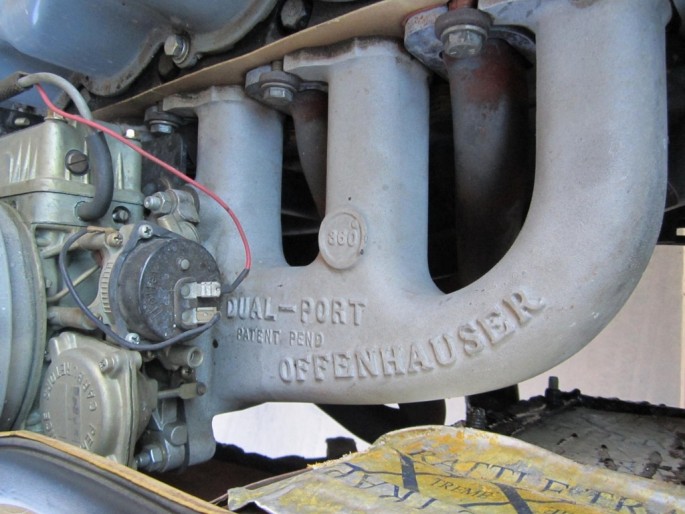 This one sports a Ford 300ci six with a Holley sitting on top of an Offenhauser intake. It also has a header which feeds into the side exit pipes. Cool! 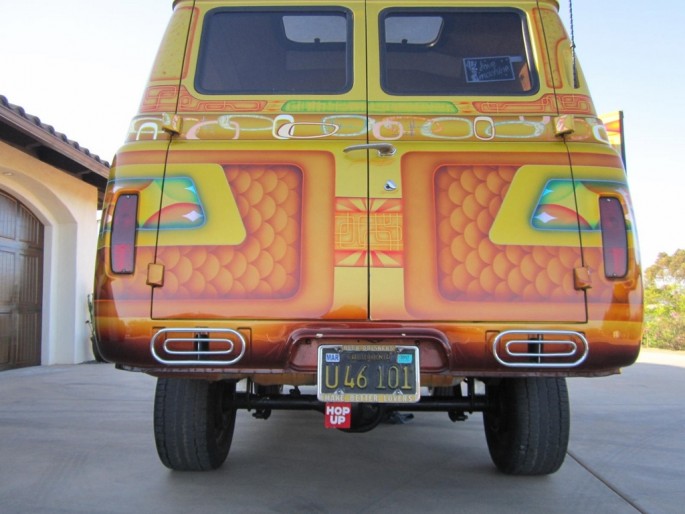 Seriously, the paint on this thing rules. It’s a work of art. 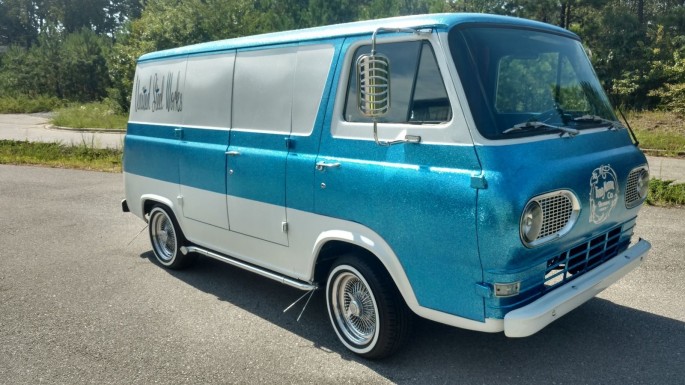 This ’67 Ford didn’t meet reserve, but the bidding got up to $8700. This one is a mix of a few different styles, both inside and out. The curb feelers and spoked knock-off wheels say lowrider, the sparkle paint and lakes pipes say Kustom, and then there’s the interior… 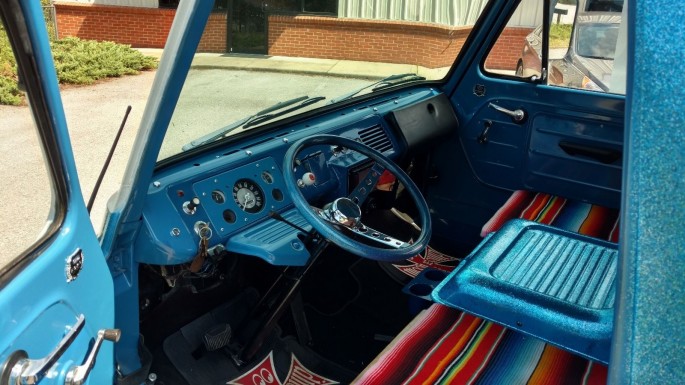 Up front, the sparkle and chrome theme continues, even onto the steering wheel. Note the seats… 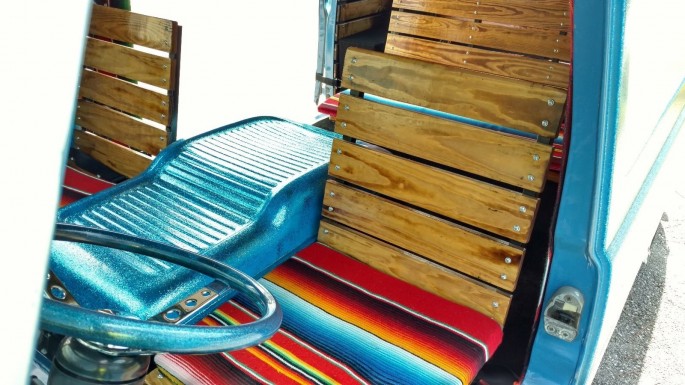 Yep, wooden seats. Not sure what the reasoning is here, but I can’t imagine they are very comfortable. 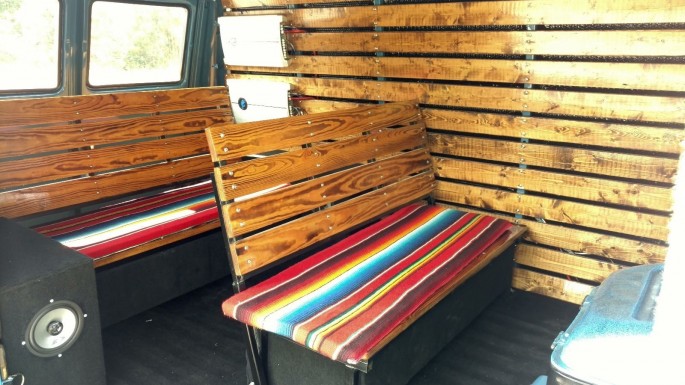 More wood! The wooden walls are a nice touch, but the park benches in the back are a bit much, if you ask me. Maybe that’s why buyers couldn’t seal the deal on this one? 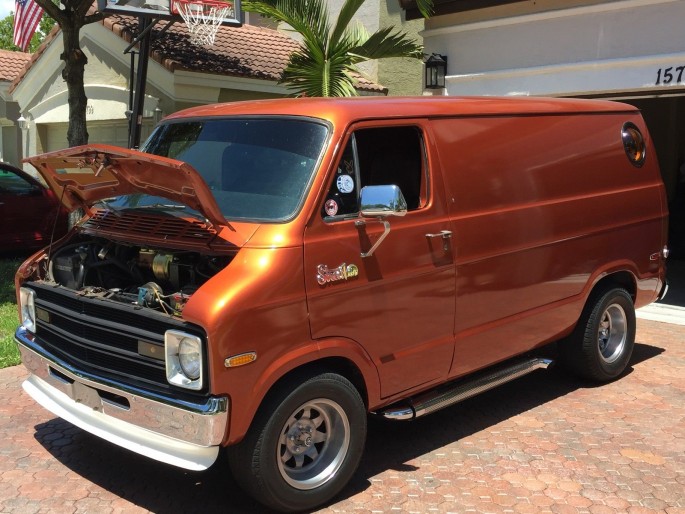 This 1974 Dodge “Street Van” tribute is probably my favorite of the bunch that’s being currently offered on eBay. The starting bid of $12k is a bit optimistic, and there are no bites on it yet. The real Street Van package (yes, that’s a real package, starting in 1976 until the early 80’s) was part of Mopar’s Adult Toys car line, and were basically Tradesman vans that had a few options checked off that made it easier to customize. This one is a little rough around the edges, but I dig it. The color, stance, fat wheels and tires, and chin spoiler make this one super cool. This van also has a 318 with some subtle bolt-ons, and has to sound awesome with those pipes! 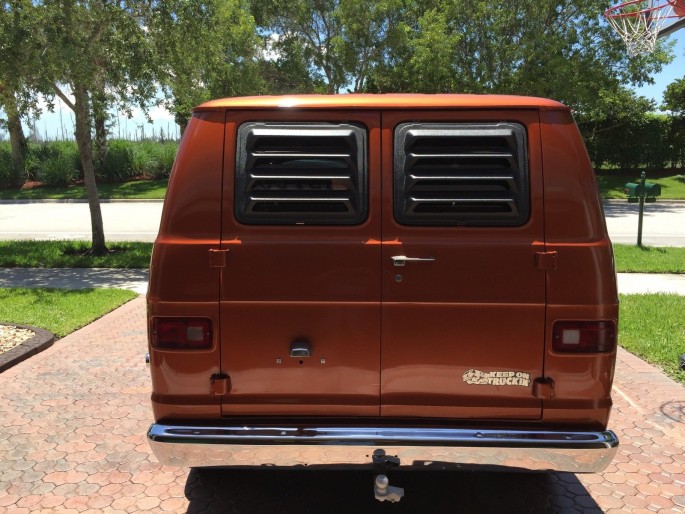 A set of louvers and a “Keep On Truckin” badge? WHAT YEAR IS IT??? 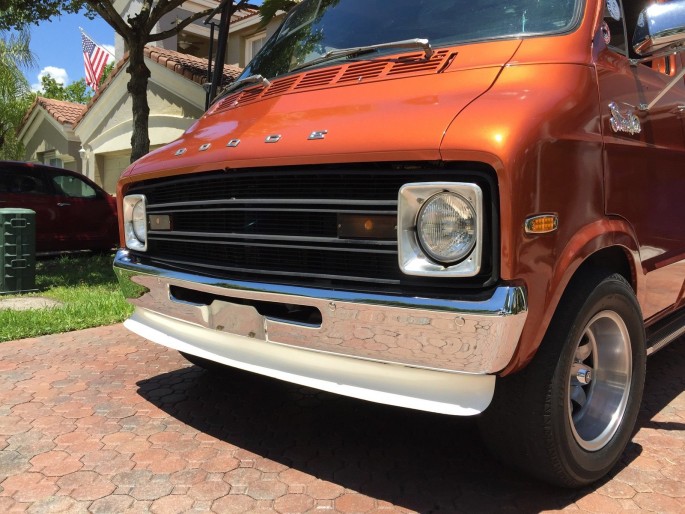 The chin spoiler is a “NOS hand laid fiberglass” piece, and makes the front end look all the more awesome. 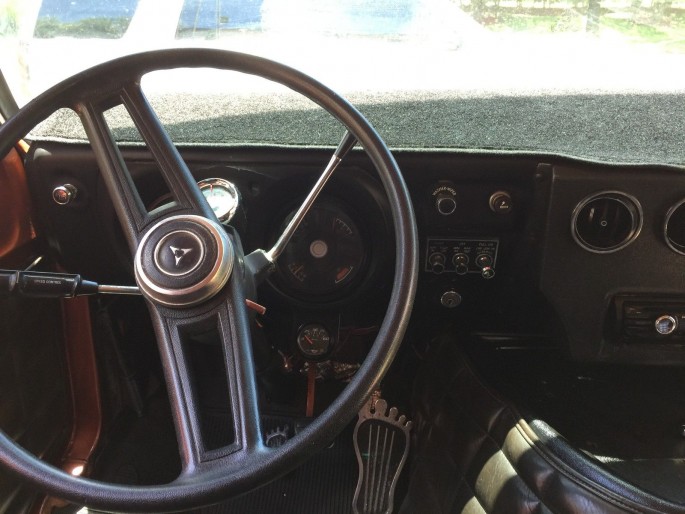 This van has the proper footprint gas and dimmer switch, straight out of a 1975 JC Whitney catalog. Only thing it needs to be perfect is a Tuff Wheel. That dash mat is extremely suspect, though. 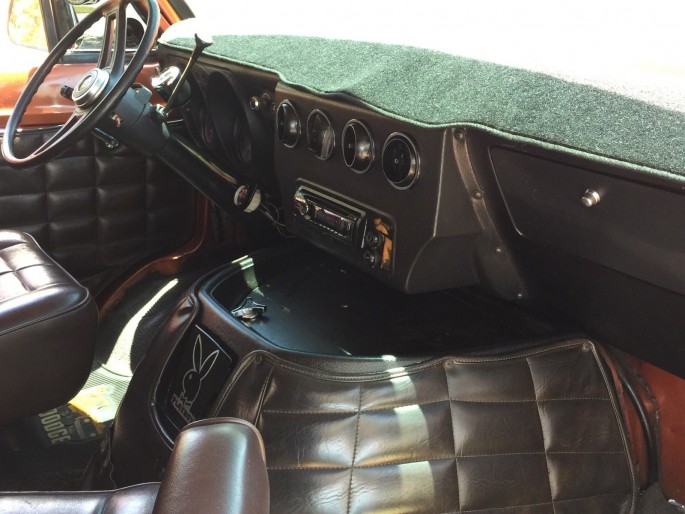 I like the tufted padded doghouse and door panels, and this thing has swivel captain’s chairs! I could do without the Playboy decal, but that’s personal preference. 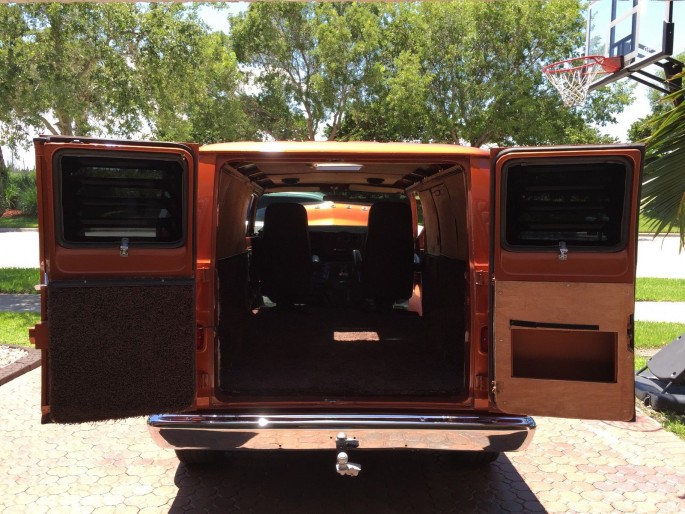 The rear is still a work in progress. If it were mine, I’d be finishing it up in the finest simulated woodgrain, toss a small leather couch in the back, find an old woodgrain console TV, and hook up an Atari 2600 to the thing!

So, now you have the evidence. These vans are starting to come out of the woodwork and are selling for decent chunks of change! Are they still a novelty? Of course they are! Think about it: I don’t think anyone built one of these back in the day without having a smile on their face the entire time. These were built as mobile hangouts (and mobile motel rooms, if you know what I mean) and some of the “van people” that were loafing around in these back then are probably nostalgic for their old rides. They were built for fun, plain and simple. Now, don’t get me wrong: I don’t think you will see these trading hands for six figures anytime soon, but I never thought I’d see one of these go for nearly $20k or more in my lifetime. And there are people out there that are doing all van shows again.  It took 40 years, but custom vans just might be cool again. Will we ever see one roll onto the stage of a Barrett-Jackson auction and sell for insane money? Who knows. Then again, I never thought a 1979 Trans Am  would sell for $187,000.

What do you think of these sweet vans making a comeback? Let us know in the comments section!

This Pro Street Plymouth Road Runner Needs Just A Little Bit Of TLC To Be Sweet! This Gasser Truck Needs Some Work And We'd Change Stuff But It Totally Nails The Vibe!

11 thoughts on “Are Custom Vans Back? Check Out The Ones We’ve Found On Ebay And Be The Judge!”